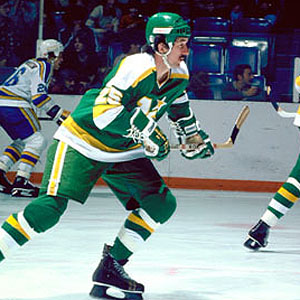 “Give me a team of Alan MacAdams,” observed one NHL coach, “and I’ll give you a championship.”  Such was the ultimate tribute paid to Kings County’s most famous hockey player, a man who has been called the best two-way right-winger in the recent history of Canada’s national game.

Born March 16, 1952, Alan MacAdam was the son of Reg and Jean MacAdam, whose family name was long steeped in Island athletic glory.  Playing on icy scraps of river or pond, and the Morell rink after its completion in 1963, young Al “never lacked advice,” recalled his dad Reg. Al took to the game of hockey as his natural element.

Following his starry years at Morell High School, Al MacAdam joined the Junior Islanders in 1969. He soon impressed coach Jack Hynes as the most dedicated player on his squad – “not the hurrah type, but one who led by example.” Al was scouted by the NHL Flyers even as a teenager. The whole village of Morell turned out for Alan MacAdam Night in September 1972 as their favourite son made his move to the Big Leagues.

In 1974, during his second pro season, Al was called up from the minors to play five regular season games and one playoff game for the Philadelphia Flyers, earning himself the coveted Stanley Cup ring.  Characteristic of MacAdam, he refused to wear the ring, feeling he did not truly deserved it.  For Al, his arrival in the NHL meant much more than prizes – “It’s a dream come true for a kid who started at the age of four.”

In 1974, Al was traded to the ill-fated California Golden Seals, and quickly established himself as the team’s “Mr. Steady” alongside fellow P.E. Islanders Bobby Stewart and Hilliard Graves.  His first NHL goal came as a member of the Golden Seals on October 16, 1974 in a 5-5 tie against the New York Rangers and Ed Giacomin.

Moving to the Cleveland Barons when the California franchise folded, Al made his philosophy of hockey plain to all: “I like to out-think the opposition.  What I enjoy most about the game are the big challenges.”

Following the absorption of Cleveland into the Minnesota North Stars, Al MacAdam played for the Team Canada squad at the 1977 World Championships in Vienna.  He proved to be Canada’s most effective forward, swirling around the Luzhniki Rink with linemates Steve Payne and Bobby Smith.  Al had truly hit his stride in the Majors.

1979 saw Al MacAdam return as Canada’s most outstanding player in the world tournament held at Moscow, playing on a line with North Star Bobby Smith and the explosive Marcel Dionne.  Dad Reg proudly recalled bumping into a high-level Russian diplomat who assured him, “Yes, Mr. MacAdam, we are very aware of your boy Al and his talents.”

The next season, 1980-81, proved to be Al’s most successful, with 42 goals and 51 assists.  MacAdam was named the winner of the Bill Masterton Memorial Trophy, which is awarded to the player who best embodies “qualities of perseverance, sportsmanship and dedication to hockey.”  This coveted NHL Trophy was doubly significant in Al’s case, as he was the first Minnesota hockey player so honoured in memory of Bill Masterton, the North Star who died in 1968 from injuries suffered in a game with California.

In June 1984, Harry Neale of the Vancouver Canucks landed Al from Lou Nanne’s North Stars, where MacAdam had been unhappy about diminished playing time. By 1985, coming to the end of a successful thirteen year NHL career, Al was named the “player/assistant coach/co-ordinator” with the Fredericton Express, an AHL team associated with the Canucks, but owned by the Quebec Nordiques.

After leaving the Fredericton team, Al assumed a job opening at St. Thomas University, as assistant athletic director and head hockey coach.  Although the school maintained only 400 men within its enrolment of 1600 students, Al would, in 1988, guide the Tommies to their first taste of playoff action in nearly twenty years.  Along the way, the team handed Al’s alma mater UPEI Panthers one of their rare defeats, before the Panthers advanced to the national championships.

In total, Al MacAdam spent eleven years at St. Thomas, being named AUAA Coach of the Year in 1995-96. In 1997, he accepted a position as head coach with the St. John’s Maple Leafs of the AHL, before returning to the NHL as an assistant coach for the Chicago Black Hawks in 2000. He remained with Chicago for four seasons, leaving the franchise in 2004. Beginning the 2004-05 season as an assistant coach for UPEI, he took over as head coach for the Halifax Mooseheads of the Quebec Major Junior League in January 2005. Al opted to retire from coaching at the termination of the 2005-06 season, citing a desire to live full time near his family in his native PEI. Currently, he resides in Morell and is employed as a scout for the Buffalo Sabres.

A scan of his NHL career record reveals 240 goals and 351 assists in NHL action involving 864 games, many of which his most faithful fan wife Anne witnessed. The name of Al MacAdam is a perfect example of what natural talent, unnatural dedication and the strength of family ties can create.

One of hockey’s most respected competitors, Alan MacAdam is a most deserving inductee to the Prince Edward Island Sports Hall of Fame.