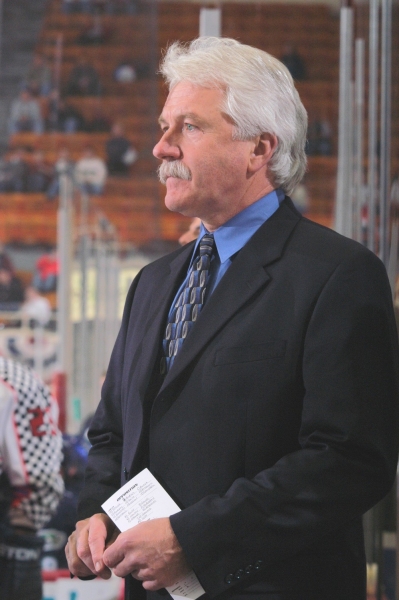 Morell’s Don MacAdam, a well-respected and successful hockey coach and builder, is to be inducted into the P.E.I.. Sports Hall Of Fame when it holds its inductions on Saturday, September 2, at the Silver Fox Curling Club in Summerside. Don will be joining his cousin Al, and uncle A.J (Albarn Joseph), as members of the Hall.

Hockey has been MacAdam’s life, and it is a career which has seen him coach and manage in three different continents in some of the world’s best leagues.

After a playing career which included U.N.B. and various minor pro teams in the mid-70s, MacAdam’s attention turned to life behind the bench. His first real success as a coach came when he returned to U.N.B. and coached the Reds to their first varsity title in twenty years, also winning the A.U.A.A. Coach of the Year award.

A professor of Physical education at the University, MacAdam assisted Jacques Demers when he was coach at the American Hockey League’s Fredericton Express, and when Demers joined the Detroit Red Wings in 1986, he appointed MacAdam as an assistant coach, a position he held for three years, Detroit reaching the play-offs each time.

Following a stint with the Cape Breton Oilers in the Edmonton organization as head coach where he worked closely with Glen Sather, MacAdam’s travels took him to his home province where he coached the P.E.I. Senators from 1992-1994, and then to Milwaukee, where as associate coach he helped the Admirals to an International Hockey League division championship.

In the late 90s MacAdam was a consultant with the Canadian team, and had national coaching duties during both the Bauer Cup and the World Championships. He has coached in Japan, leading the Nippon Paper Cranes to a national title, and from 1999-2004 he coached the Charlotte Checkers in the East Coast Hockey League. In 2004 he changed direction once again in his career, where he became the coach, general manager, and owner of the Dayton Bombers.

An owner of a Stanley Cup ring from his days in Edmonton, a noted author with numerous hockey instruction book titles to his credit, and once voted one of Charlotte’s “Most 50 Interesting people,” Don MacAdam has led a full and varied life through his hockey endeavours.