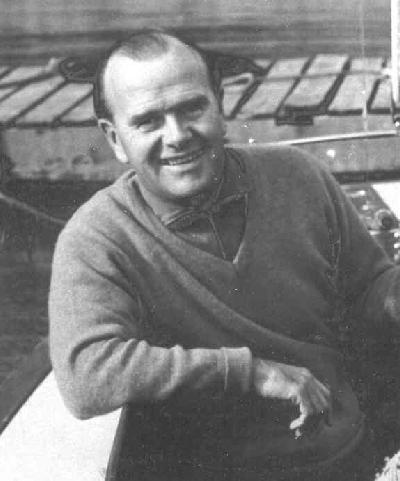 Born September 4, 1904, in Charlottetown, Dr. Samuel “Sandy” MacDonald, excelled in numerous sports in his early years. Voted the outstanding athlete at West Kent School in 1919, Sandy proceeded to Prince of Wales College, where he was captain of the hockey and football teams. Encouraged by Max Irwin, Sandy began his sailing career at the Charlottetown Yacht Club. It was later at McGill University that the young medical student would get his first taste of competitive sailing. After leaving McGill, MacDonald travelled to the University of Edinburgh Medical School, where he nearly played hockey for the British Olympic Team in 1928, only disqualified at the last minute on the grounds of his Canadian citizenship. He performed his surgical residency in St. Louis, Missouri, and began his medical carrier in London, Ontario. After serving in the navy as a Lt. Commander and Chief Medical Officer, MacDonald settled in Montreal, becoming a prominent and well-respected urological surgeon. It was at this time that he began his associated with the Royal St. Lawrence Yacht Club, one of the premier sailing clubs in the country. Starting as a skipper of smaller boats, he soon graduated to Lighting Class and Dragon Class craft. By 1950, Dr. Sandy MacDonald had already begun his ascendancy in North American Sailing.

With his two-man crew, MacDonald’s victories included top-rated regattas, such as the Royal St. Lawrence and the St. Lawrence Valley, and garnered him prestigious awards, such as the Lord Reading, Duke of Edinburgh and John Foster Dulles Trophies.

In 1960, Dr. Sandy and his crew won the Canadian Trials and represented their country that year at the Olympics in Rome. After two days of competition, from a field of 26 nations, Sandy would be in first-place in the Dragon Class. Eventually finishing in fifth place, Sandy had captained Canada to its most impressive showing in Olympic Sailing.

It would be at Sao Paolo, Brazil, at the 1963 Pan American Games that Dr. Sandy and his crew would win the gold medal, Canada’s first yachting gold in the Pan American competition. The next year, following his Pan Am success, Dr. Sandy once more represented Canada at the 1964 Tokyo Olympics. Out of a field of 30 nations, the MacDonald crew finished eighth in the 5.5 Meter Class. Sandy enjoyed most of his retirement years in Keppoch P.E.I, keeping busy with hobbies and volunteer community work.

After his wife passed away in 1986, Sandy moved to Victoria B.C, and remained there until his death on October 21, 2003.