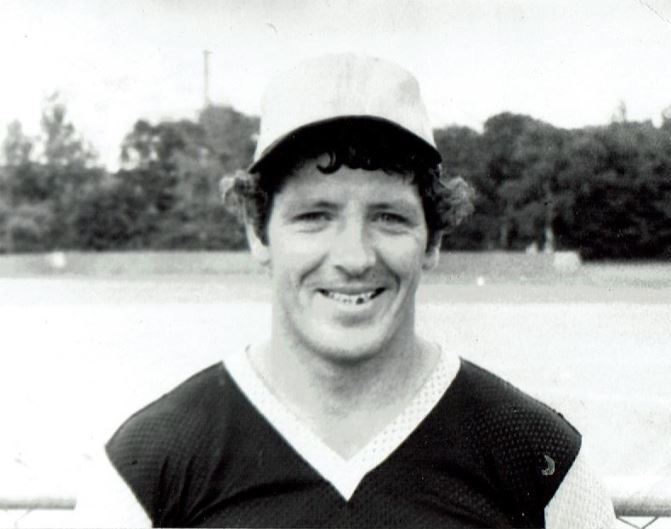 Please fasten your seatbelt as there is a lot to digest about the accomplishments of Ian Tex MacDonald in Sports, Education and Governance in Prince Edward Island.

The MacDonald Family of Charlottetown has been well represented with some outstanding athletes in baseball, softball, football and harness racing. In fact the MacDonald brothers made up a good portion of the 1970’s Charlottetown Don Fawcett’s Fastball team.Tex was joined by brothers Sockey, Sandy, Sput, Rabbit and Scott playing on those strong Fawcett teams. Fred, the Sports Prophet, was involved in baseball so wasn’t on the team.

One of the best from this large sporting family is Ian “Tex” MacDonald. Tex becomes the third member of the MacDonald clan of Charlottetown to be inducted into the PEI Sports Hall of Fame following his father, the late James “Fiddler” MacDonald (1976) and his brother Hubert “Sock” MacDonald (2013) as members of the Hall.

Tex is best known as a standout softball player who excelled at the Canadian senior nationals but he also has left his mark in baseball, football and track and field in Prince Edward Island.

Beginning with baseball he made a name for himself when he starred with several Maritime champions. In 1962, 1963 and 1964 he played on the Maritime Midget, Juvenile and Junior championship teams and was a standout outfielder for the Charlottetown Legionnaires coached by Charlie Ryan. In 1965 he played on the Montague team that won the Island Junior crown and went to the Maritime finals and in 1970 Tignish picked him up for the Canadian nationals in baseball and he led the Island champs in hitting but that would be his final tournament in hardball.

In the early 70’s Tex turned to softball which by then was growing in popularity.

In 1977 he led all players in hitting at the Canadian Senior Men’s Championship in Hull, Quebec with a .500 average and was named All-Canadian left fielder. Crowds of 3,000 came out to see the provincial senior tournament in Charlottetown with Tex a fan favourite.

During the winter of 1967 he was a player on the provincial junior hockey champion Rogers Rangers under head coach Norman “Hawk” Larter. It’s in hockey where he got his nickname. He was named after one of his favourites in the NHL, Jack “Tex” Evans who was a member of the Chicago Blackhawks.

In track and field under Dr. Dave Boswell he came within a yard of winning the open men’s hurdles title in the provincials. His prowess in track also benefited him in baseball and softball where he was among the speediest players on the base paths.

From 1972 into the early 80’s, first as a player and later as a head coach Tex played in thirteen nationals in softball. He was named the Lieutenant Governor’s Award winner, Sport PEI’s highest honour and Senior Male Athlete in PEI in 1977 after leading the Canadian nationals in hitting.

In Football Tex MacDonald spent 12 years as head coach of the Colonel Gray Colonels in Island High School Football winning ten championships in the 1970’s and 80’s. He also coached the Island Construction Colonels for four years (2003-2007) and won two more titles in the PEI Tackle Football League. And to top it of he was the first head coach of the Holland College Hurricanes when they joined the Atlantic Football League in 2010.

His coaching in baseball continued in the summer of 2016 when he joined the Charlottetown Gaudet’s Autobody Islanders as the third base coach in the New Brunswick Senior Baseball League. He helped coach the team at the Canadian Senior Men’s Nationals in Fredericton in August that same year.

Tex was recently named to the Football PEI Hall of Fame in April, 2016.

He was a teacher at Colonel Gray High School in Charlottetown for 35 years where he made an impact on hundreds of teenage students and student-athletes.

As an athlete he excelled as a player and translated these attributes into being an outstanding coach in softball, baseball and football.

Ian “Tex” MacDonald is most certainly worthy of being inducted into the Prince Edward Island Sports Hall of Fame for his ability as an athlete and a mentor to many athletes as both a teacher and coach, a legacy for which he can be truly proud.

It is indeed an honour to welcome him to the PEI Sports Hall of Fame. 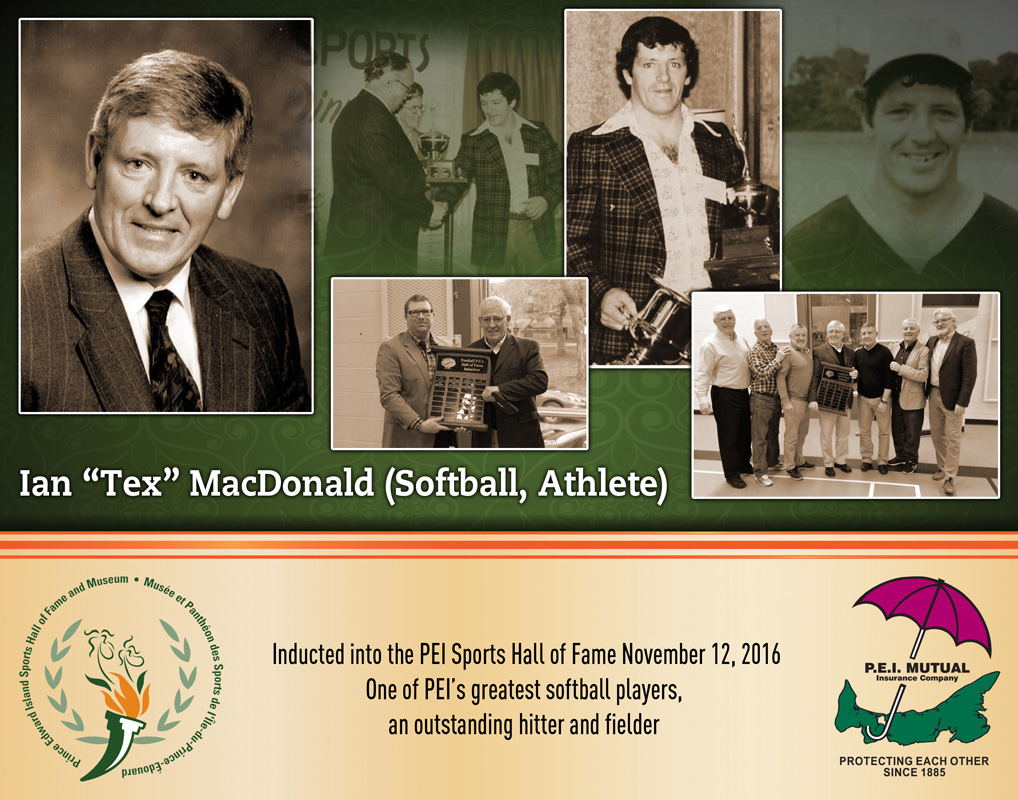