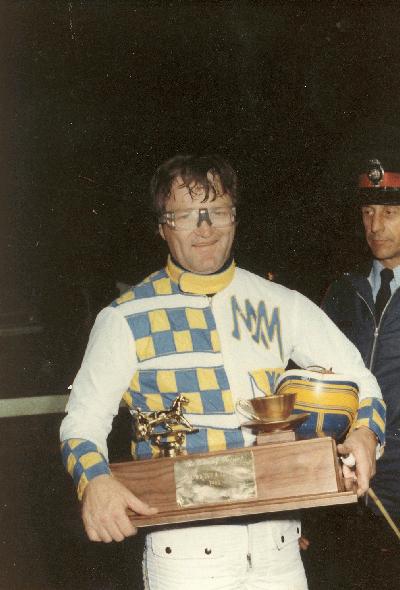 Reproduced is the citation read by Laura on the night she inducted her father into the PEI Sports Hall of Fame. It is considered by all those who heard it to be one of the finest induction speeches ever delivered at a Hall of Fame induction.

“”My father has loved horses, harness racing and this community his entire life. He has laboured tirelessly for the last 45 years in order to get to this point in his life. This induction to has been hard-won but it is also unquestionably deserved. But that is the nature of being a horseman and Harness racing is, after all, all about strategy and struggle.

There are facts and statistics galore that speak to what kind of horseman my father, Michael MacDonald, has been and those facts and statistics alone earn my father a place in the Hall of fame… 2294 lifetime wins, over 13 million dollars in purse money, his un-matched 5 Gold Cup and Saucer victories, the fact that he’s won every single major Maritime race or that he has held track records throughout North America for every age and class of horse. But for every statistic and for every fact, you should also know that there is a story.

You can look up all the past Gold Cup wins and read off the names of horses next to a date and a time and, truthfully, you’d probably be impressed with my father’s record. But then you wouldn’t know about Ventall Rainbows’ win in the slop and the mud and how big my father’s smile was through the muck standing next to his beautiful new wife or about the dramatic saga of Pearl’s Falcon and Winner’s Accolade, or about how exciting it became every year to wonder who Mike was bringing down.

You can read about how Michael broke the CDP track record twice in 48 hours during Old Home Week 1991… but if you were there, you remember the feeling of disbelief because Mike just did something unheard of…again…. and you’ll remember the way that the crowd erupted when 1:55:4 lit up on the tote board.

You can google Michael MacDonald and read about all the great horses that he trained and/or drove. Horses like Ventall Rainbow, Gimble, Vizzi Hanover, Hubris, Rumpus Hanover, Bomb Rickles, Kin O’Classic, Yankee Predator, Winner’s Accolade, JoJo Maruri, Pearl’s Falcon, Southview Matt, Chewy Gross, Ambivalent, Moldau, Sandy Hanover, Whosurboy, Ebbalutionary, Harmony P and Bellas Bliss. But if you ask Michael he’ll tell you all about his favorites, like Blush of Spring, who had more spirit and determination to win than any horse he’s ever encountered. He’ll also tell you about the less than famous horses in his career, like his very first drive, Mr. Thunderbolt, who ran right off the track in the second turn and straight into Andrew Perry’s barn.

And then, sometimes, even the story isn’t the whole story. You might know the story of Harmony P, who’s raced in 4 Gold Cups and who, in 2003, won the Friday night consolation and then was slotted into Saturday’s Gold Cup after 5 Card Cam was scratched… you might even remember how Harmony P almost became the first horse, due to an amazing set of circumstances, to ever win both the consolation and the Gold Cup in a single year. But he was caught right at the wire by Sand Oils Dexter. But if you happen to have heard my sister Angie tell the story, you’ve heard about how the Blue and Gold checkers still made it into the circle that night as Sand Oils Dexter gave Mark MacDonald his first Gold Cup win and how incredibly meaningful that was for my father, for Mark and for all of us. The way my sister tells the story, you begin to realize that it isn’t just the victories and the triumphs that make a career great.

The real reason that Michael MacDonald belongs in the hall of fame is not connected to any trophy he’s won, any record that he has broken or any champions that he has trained. I believe that my father’s greatest legacy is his tireless dedication to the growth and success of the harness racing community at large, but especially to the maritime harness racing community. Long before the confederation bridge opened, Michael MacDonald worked tirelessly as a link between PEI and the mainland, always promoting, always keeping the interests of the Island at heart. It doesn’t matter how many years he spent at Blue Bonnets or running the roads between tracks all over North America, the boy from Beasley Avenue never referred to PEI as anything but Home. And as such, Dad always told people about the beauty of this place and the warmth and generosity of its people… He treated every Islander that came through Montreal like family. Over the years, Dad has employed innumerable maritimers, paying forward the tutelage he received from the great horsemen of the generation before him, giving a start to some great Maritime talent of the next generation.

He isn’t just Mr. Gold Cup and Saucer because of how many times he has crossed the finish line first, he is Mr.Gold Cup and Saucer because of how many incredible owners, trainers, drivers and horses he has brought and enticed to the Island. We all know that the Gold Cup is a better race, a more exciting and prestigious event, because of the work Michael has done to build its reputation and image across Canada and the United States.

It seems only fitting that he should remember his roots…. after all, it was maritime owners, breeders, grooms, and horses that are so greatly responsible for giving my father the chances he needed, the raw material required, to make a name for himself internationally, and by association for Maritime harness racing,. It’s fair to say that Dad has been an unmatched ambassador for Maritime horsemen. To state it plainly: He is a fierce competitor, a talented and fearless driver, an insightful trainer and a generous and supportive mentor. He has always presented himself amongst harness racing’s elite with an understated pride, confidence and class.

But a true sportsman’s career and accomplishments don’t only belong to him or her, they belong to the entire community. We become attached to our sports heroes, we rejoice when they win and we feel sad when they don’t. The excitement they experience and the pride they earn becomes our excitement and pride as we follow their trajectory, we go along with them as they step up to the challenge and take on new adventures. That’s why we come to the racetrack and that’s why we yell at the top of our lungs when those horses come barreling around the final turn. We do it because we put a little bit of yourselves, our hopes and our desires, into their hands. Over a long enough career, like the one my father has had, the sportsman becomes a repository for our collective memories and a symbol of our experiences. Just as my father has told us all a thousand stories, creating legends and myths about the great men and women that were his teachers, colleagues and friends, so too has his life become the stories that we will tell. The last time I was in P.E.I. I sat in my mother’s kitchen and listened to Jamie Smith and Anthony MacDonald tell stories about my dad. Of course, they had everyone in stitches and most of what they said I probably shouldn’t repeat here, but it was an amazing moment when I realized that my father used to do the same thing around the Sunday night supper table or over a game of gin in the tack room. If you’ve been lucky enough to hear one of Dad’s yarns you know that he tells hilarious and amazing stories… stories about Roach MacGregor or Harvey Cormier or any number of other colorful characters…. we know PEI has no shortage of colorful characters…. Storytelling is such an important part of maritime culture, it’s how we keep and share our memories with one another and how we build and shape our identities as individuals, friends and a community. In a way, this hall of fame is a way for us to make sure that our stories are never forgotten and I’m glad that you all believe that my father should never be forgotten.

I wanted to end with one of my favorite stories about my dad. It’s short but it’s got a great ending.

In 1995 Dad wasn’t sure who to bring home for Old Home Week but after I pestered him all summer about it, he finally decided to take a horse that no one really noticed and who qualified for the final pretty unceremoniously. And through most of the race, Sandy Hanover didn’t give anyone much reason for concern. But just as they neared the final quarter, Sandy and Michael made their move. Forgotten about way in the back, he pulled out and started coming fast. Hitting 4 wide as they headed for home, everyone was shocked and unsure about whether they were actually about to see what they thought they were going to see… the longest shot on the board, sitting dead last, about to take the lead in the final quarter resulting in Michael Macdonald’s 5th (and final) Gold Cup and Saucer victory. Well, it’s been called the greatest upset in Gold Cup history for a reason. And with that Dad reminded everyone that you never know what’s going to happen in the backstretch and that you should never underestimate the potential of the underdog.

I was 14 years old in 1995 and I remember that I was standing with Cliff, Carole and Renee Pound when dad won and I remember jumping the fence and all of us running to the winner’s circle as if our lives depended on it. It was one of the most thrilling moments of my life. I ran up to my father and he picked me up and put me in the sulky as Sandy Hanover walked into the Charlottetown Driving Park winner’s circle. He walked with one arm around me, holding the reigns and steadying me, taking care of me the way that he has always has. The other arm was busy taking hold of the hands of his friends and colleagues as they shared their elation with each other. I remember that moment as quintessentially Dad: even if his moment of triumph, his greatest concern was sharing the win with his family and his friends. And that’s how I know that I can stand here tonight and say to you all, from the depths of my heart and the hearts of my mother Judy, my sister Angie and especially my father, Michael MacDonald: Thank you for being our friends and for honoring an amazing lifetime of work and a lifetime of love. It wouldn’t have been worth it without all of you in the winner’s circle with us.””

Mike MacDonald passed away June 19, 2018 at the age of 70, leaving behind an impressive harness racing legacy that will be remembered for years to come.