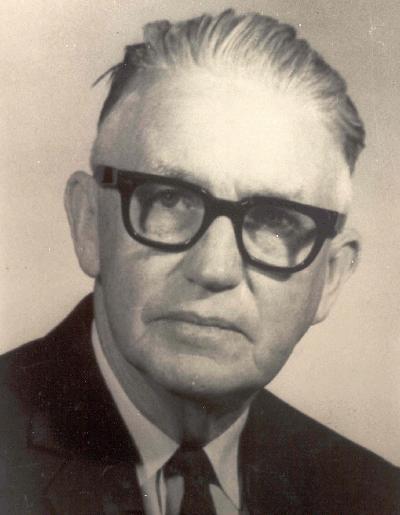 Among the original group inducted into the PEI Sports Hall of Fame in 1968 was Norman “Small d” Macdonald. His illustrious career as a sports journalist and his tireless devotion to athletics made the decision an easy one. As a sports writer for more than three decades, Norman combined his passions for sport and language into columns which were widely enjoyed. As a man actively involved in sport throughout his life, Norman worked with numerous sports organizations as an administrator and as an official.

“Small d”, so nicknamed for his habit of correcting people who spelled his surname with a capital letter D, spent much of his life as a school teacher. His command and love of the English language was well known to his students. Norman was not only a writer of prose, but of verse and of scripts for the theatre. His abilities directing and acting in plays earned him a Canadian Drama Award. His exceptional 45 year career saw him teach in many communities across the Island, from Dover in King’s County, to St. Eleanors, Cape Traverse, Kensington and, eventually, Summerside. It would be here that he began to moonlight as a sports columnist for the Pioneer newspaper. The column, titled “On The Trail of Sports,” quickly became popular among the newspaper’s readership. After the Pioneer amalgamated with its rival newspaper, the Journal, “Small d” took a job reporting sports for the Guardian in 1948. His new column, “Sports Echoes,” became as popular, if not more so, than its predecessor.

Norman chronicled the sporting events of his time with great wit and an elegant style. “Small d” was there when Alfred Groom won the Canadian pole vault championship and he was there when Windy Steele famously upset Charlottetown. He reported the fierce pitching duels between Joe Bernard and Lefty MacAleer, and Les Gaudet’s grand slam that won the Maritime title, and wrote a poem when Dorothy (Gallant) Peters swam the Northumberland Straight. He would frequently write that way, in rhyming verse, to the delight of his readership. It was a sad day for them when d’s final column entitled “Swan Song” was published shortly after New Year’s 1969.

Norman’s involvement in sport was not limited to writing however. For many years he was a hockey commentator with CJRW. He was also a talented administrator and official. Early in his life he was a key figure with the Albany St. Pats hockey team, naming them after the then Toronto St Patricks of the NHL. In the late forties, with Harold McIver, he was secretary of various hockey clubs and was on the S.Y.C.I. Executive. He was also the Secretary-Treasurer of the Summerside Curran and Briggs baseball team during their three year streak of Maritime championships from 1948-50. A good skater, “d” refereed numerous hockey games during his lifetime. He also acted as the official scorer of the Summerside Baseball League. One year leading up to the last game of the season, his son-in-law Robert Schurman was in a close race for the batting championship with Moose Carson of the R.C.A.F. Flyers. Not wanting to influence the results, Norman told his assistant Wilfred MacNeill “I am not calling this game; you call the hits and errors and I will mark them.” Actions such as this cemented his reputation as an honest and fair man.

Norman “Small d” Macdonald passed away Sunday, January 9, 1977 at the age of 79. Wrote John “The Realm” McNeill, “Norman had a good life and a long one, and all his goals were reached. Sport and scrap books of a hundred and maybe a thousand sports sons will carry his name to posterity.” Norman “Small d” Macdonald, the premier chronicler of Prince Edward Island sport for the forties, fifties and sixties, is justly deserving of his place within the Sports Hall of Fame.