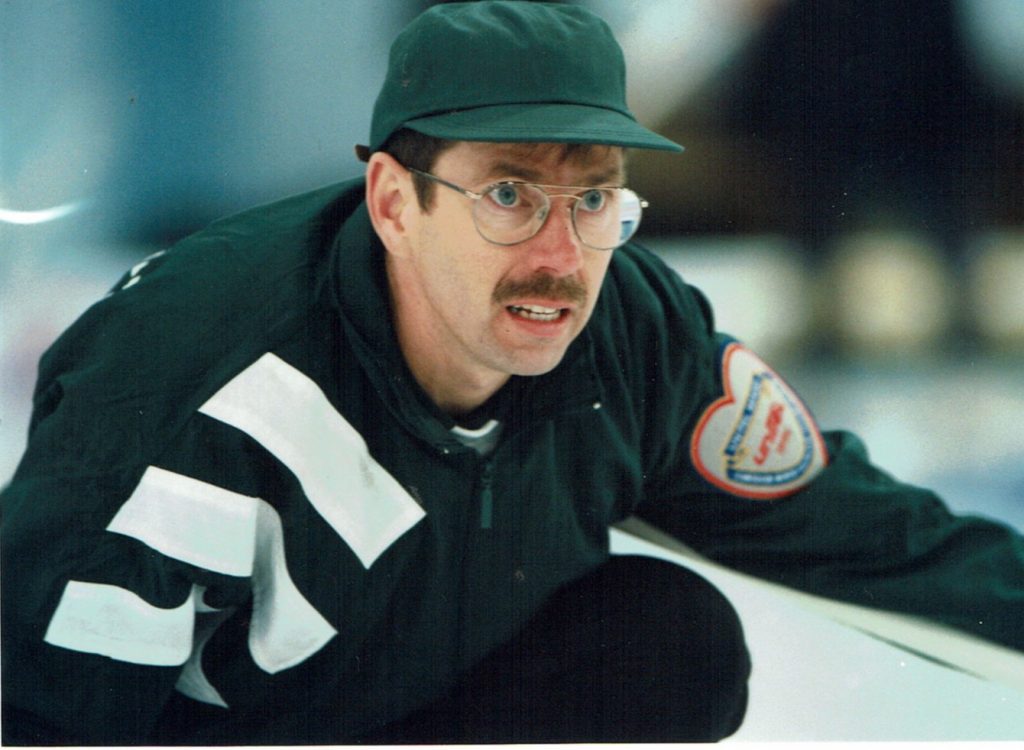 Peter Stuart MacDonald is one of PEI’s most successful curlers playing on five PEI Tankard winners that represented the province in the Brier national men’s competing in the national men’s in 1976, 1978, 1981, 1996 and 2001. He was also the fifth player selected by five other PEI champions for the trip to the Canadian men’s curling championship.

MacDonald was born in Summerside on April 7, 1956 and began to curl at the age of fourteen. He skipped the 1973 PEI Junior Men’s champions at the age of 16. The Island rink competed in the Nationals in Moncton, New Brunswick. His rink-mates were Terrance McTaggart, Terrance Tupper and Philip Hardy.  Two years later he was a member of the Bill Merklinger PEI rink in the Canada Games in Lethbridge, Alberta. MacDonald was mate on the team that also included second stone Rick Brauen and first stone King King.  John Fortier coached the PEI four-some.

He’s played in five Brier national men’s championships in four different decades and four times as a skip with his teams combining for a respectable 22-33 won-lost record over 25 years of competition.

In 1976 he played in his first McDonald Brier in Regina on a rink skipped by Ken MacDonald along with rink-mates Keith MacEachern and Al Ledgerwood. The rink competed out of the Charlottetown Curling Club.

He was skip on the 1978 PEI champions from the Summerside Curling Club that included brother Rod MacDonald, Ron Casey and Keith Wedge that went 5-6 in Vancouver but won 5 of the last eight matches after an 0-3 start. PEI had wins over Nova Scotia, Manitoba, the Territories and New Brunswick and beat Ontario 7-3 following three straight losses at the beginning of the event. It was the first time in ovder 30 years a Summerside rink had played in the Brier with the last being Cliff MacDonald in 1957.

MacDonald’s 1981 rink was made up of himself, Robert Carruthers, Sandy Stewart and Roddie MacDonald from the Charlottetown Curling Club that went 4-7 in the Labatt Brier in Halifax. There was another win over Ontario, this time 7-4.

1996 saw his rink have their best national men’s by making the playoff round in the Labatt Brier in Kamloops, B.C. despite another 0-3 start. MacDonald’s rink that included Grant Somers, John Postma and Rod MacDonald, won six straight matches and finished 6-5 but needed to play Newfoundland in a tie-breaker to advance. The PEI foursome from the Silver Fox Curling & Yacht Club had already beaten Newfoundland, 8-5 and won again, 10-6 with a playoff spot on the line. In the Page Playoffs the Island rink lost 7-4 to Quebec but enjoyed a tremendous week.

The 2001 PEI champs, again out of the Silver Fox in Summerside, travelled to Ottawa for the Nokia Brier. MacDonald’s mates were Peter Gallant, brother-in-law Mark O’Rourke and Mark Butler. The Island rink had a 3-0 start taking the opener, 7-6 over the legendary Al Hackner of Northern Ontario and victories facing British Columbia and Newfoundland-Labrador. They finished the week at 5-6 overall missing the playoffs.

During his career MacDonald also win three provincial mixed curling championships and represented the Island in the nationals in 1990, 1995 and 1999.  The 1990 rink saw his sister Joanne Postma play third, brother Rod as second and wife Karen A. MacDonald as lead.

Again the wives and brothers won the provincial Mixed in 1994 and competed in the 1995 Canadian Mixed in Sarnia, Ontario and finished as runners-up. For their efforts they earned the Sport PEI Team of the Year Award.

The MacDonald rink finished as runners-up in the 1999 Canadian Mixed in Victoria, B.C. Sister Kathy O’Rourke was at third, brother-in-law Mark O’Rourke was second and his wife Karen played lead.

In 2013 the rink was made up of the MacDonald bothers, John Likely and Mark O’Rourke.

They finished tied for third at the Canadian Seniors event held in Summerside with an 8-3 record but lost in a tie-breaker. Peter was chosen first-team all-star lead.

MacDonald has also served as secretary-treasurer and auditor for the PEI Curling Association and as a director for the Summerside Curling Club, the Charlottetown Curling Club and the Summerside Silver Fox Curling and Yacht Club management board.  In addition he was also a director of the Charlottetown 1999 and 2011 Scotties Tournament of Hearts committees and was a Sports Director for the Canada Winter Games committee in 1991, responsible for junior men’s curling.

He was finance chair for the 1987 Canadian Mixed held at the Silver Fox Club. He even coached the Peter Gallant rink that went on to win the event.

Peter had a level one coaching certificate and has coached at all levels both provincially and nationally.

Peter and his family have been generous supporters of all sports including the PEI Curling Association for many years through the D. Alec MacDonald Ford dealership in Summerside. They have being a sponsor of the PEI Curling Hall of Fame since its inception.

Peter MacDonald is also a co-owner, director and past president of the Charlottetown Islanders of the Quebec Major Junior Hockey League.

He is a director of the Canadian Automobile Dealers Association and has served as Secretary-Treasurer and Vice-President.

He’s also the new chairman of the national organization in 2018.

MacDonald has served as President of the Ford Dealers of Canada, the Greater Summerside Chamber of Commerce and was a division chair of the United Way.

PEI Sports Hall of Fame member, curling great Kim Dolan says he’s been dedicated to the sport of curling a player plus growth in the sport on PEI.

“Not only did Peter play the game he loved but has coached at a high level helping many teams aspire to goals of being champion curlers, making it to the Brier and Scotties,” she says. “Peter not only helped with the technical side of the game but more on the difficult mental side. He has helped many young players.”

In October, 2016 he was inducted into the PEI Curling Hall of Fame as athlete and builder. 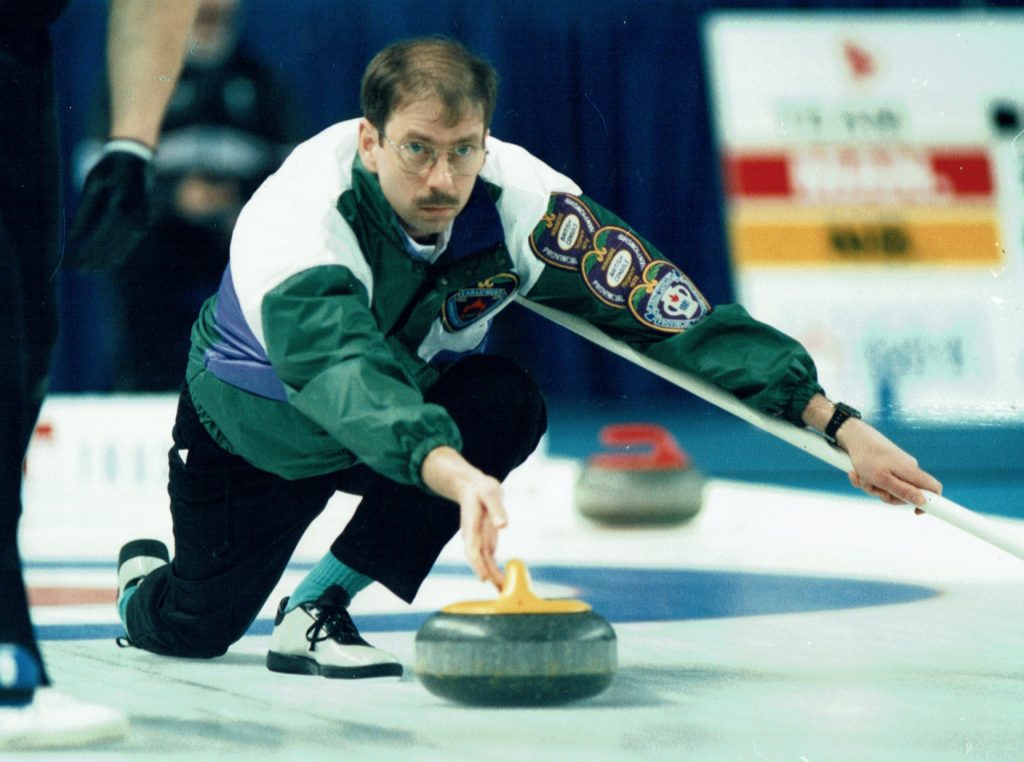