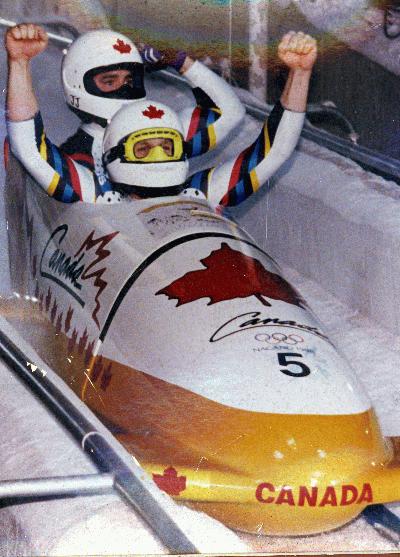 Having an athlete qualify for the Olympics is anything but an everyday occurrence for a small province like Prince Edward Island. Charlottetown native David (Eli) MacEachern made his first Olympic appearance at the 1992 Albertville Games, and six years later he fulfilled the ultimate dream by winning a gold medal.

Born on November 4th 1967, David demonstrated his excellence in the sports of track & field and soccer while a student at Colonel Grey High School, and later at the University of Prince Edward Island. He was the youngest member of the 1985 Atlantic champion and Canada Games Provincial Soccer Team, and was to compete again in Canada Games as a member of the P.E.I. Track & Field Team in Saskatoon four years later. Soon after the 1989 Games Dave took up residence in Calgary and while continuing to compete in track & field team, he also began to pursue his latest sport, the bobsleigh.

As in soccer and track & field, Dave’s determination to succeed soon became evident in this most unlikely sport for an athlete growing up in Prince Edward Island

As a former brakeman for driver Greg Haygenluck, he was instrumental in Canada’s silver medal performance at the opening event of the 1991-92 World Cup Two Man Bobsleigh competition in Calgary. Competing for Canada on both the Two and Four Man Bobsleigh Team, Dave was to enjoy further success and collect more medals at the international level,. including gold at the World Cup in 1993 with Canadian driver Pierre Lueders..

After setting a record at the 1994 Games, Dave MacEachern went on to became the best bobsleigh brakeman in the world, which culminated in victory with Lueders in the two man bobsleigh competition at the Winter Olympics in Nagano, Japan in 1998.

Leading up to the Olympic win was a career of 28 World Cup medals, five World Cup titles and a world championship silver medal. At the 2002 Salt Lake Winter Olympics, Dave had a different vantage point of the Bobsled competition. After nine years as a member of Canada’s national team, Dave had retired from bobsleigh racing and participated in the Games as a colour commentator for the CBC.

On returning to the Island after his retirement, Dave set up (and continues to own) Dynamic Sport Performance, Eastern Canada’s leader in sport specific physical conditioning programs. The principles of speed, strength and self-belief that have guided Dave throughout his athletic career became the foundation for Dynamic Sport Performance. In addition, Dave continues to share his story of motivation and inspiration through corporate, school and community presentations across the country.

Since his first Olympics in 1992, he has shared his story to over 250,000 youth throughout North America. His motto, which has carried him to the top of the sport world, has always been, “Believe, and achieve.”

Dave MacEachern lives in Charlottetown with his wife Triona and three children. MacEachern was accepted into the Canadian Olympic Hall of Fame in April of 2011, recognized for his excellence in sport.

For websites with information on David MacEachern’s induction please use the following link.