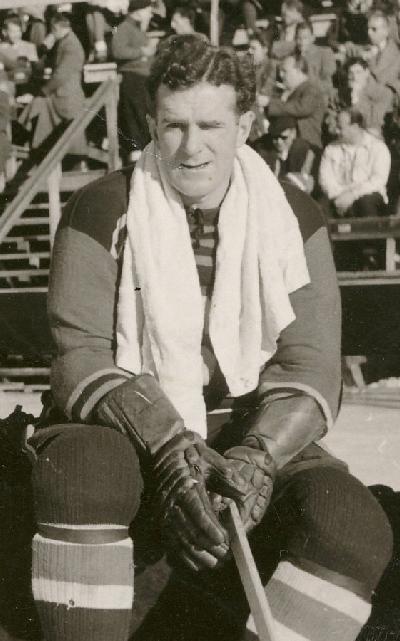 William Oliver “Bud” MacEachern may not be a familiar name to Island sport followers, but the Charlottetown native was responsible for spreading hockey’s gospel across three continents and six countries after the Second World War.

His accomplishments as a player and coach were legendary in his time,
and his playing career contained many highs, the first of which was capturing a Maritime midget championship with Charlottetown on a team which included the likes of Art Perry and Tarky Whitlock.
Developing into a strapping right-winger, MacEachern got his first taste of senior amateur competition while still of junior age  with the Glace Bay Miners of the Cape Breton League, in 1938-39, before joining the Sydney Millionaires and fellow Hall-of-Famer Tic Williams in their quest for an Allan Cup.
Twice winning the Maritime title, the Millionaires just fell short of their goal, losing the eastern finals to Kirkland Lake in 1940, before going one step further in 1941, where they lost out to Regina in the national championship series.
Following war service, first with the Royal Canadian Medical Corps and then the Canadian Air Force, Bud returned to Canada and the Big Four with Truro, but he had been bitten by the European bug and the challenge of developing hockey abroad.
Returning to England, MacEachern suited up with the Streatham Flyers of the English League, still one of the most recognizable names in British ice hockey. He made an immediate impact, once scoring seven times in one game and earning numerous accolades, including being recognized as one of the greatest Flyers ever in the club’s official history.
In 1950 he joined the Norwegian team as coach, leading them at the 1952 Olympics in Oslo before moving on to Sweden, where he came close to piloting them to a World Hockey Championships title in 1954, coming within 20 seconds of earning a tie against the Canadians that would have been a major upset.
After a spell with Switzerland, MacEachern made for warmer climes and Australia in 1957, and in 1959 he took on his 4th national team coaching position, helping the Australians develop their game for five years, which included another tilt at the Olympics, in 1960 in Squaw Valley.
Certainly a hockey life well-lived, MacEachern made occasional visits back to Prince Edward Island from his Melbourne home, and stories of his exploits were always well-received in his home province. He died in 1997.