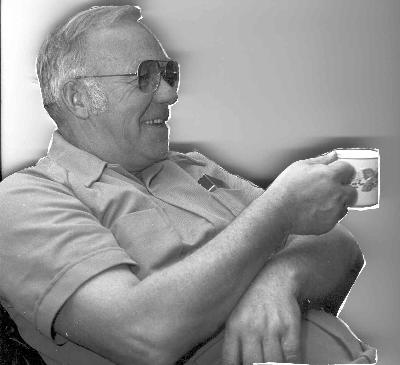 The Maritimes have for many years sent out major league harness drivers to conquer the world.  One of the most colourful and supremely talented of these modern charioteers was James “Roach” MacGregor.

Born in Charlottetown on January 7, 1929, James Warburton MacGregor was one of a family of nine who grew up in the shadow of historic Charlottetown Driving Park.  While his mother baked meals and shortbread for the Old Home Week crowd, Roach’s railwayman father kept several horses on their Kensington Road property.  The excitement of keen harness racing competition so close at hand captivated the youngster, and by age fifteen, he would be himself training and driving at the local racetrack.

Young MacGregor excelled in a variety of sports outside racing.  A fine hockey player, Roach was also a scrappy boxer who fought the best local ring artists of his day, retiring undefeated as the Island light and welterweight champion.  Curling with the Myron Bell rink from Charlottetown, he was one of the local foursome that was runner-up team at the 1960 British Consuls.

Even in light of these other accomplishments, it is harness racing that dominates MacGregor’s contribution to the world of sport.  Following his driving debut behind an unexceptional horse named MacWatson, Roach would eventually win his first event that winter, racing on the ice, with New Look.  Several wins with New Look followed, and the young MacGregor gradually acquired a sizeable public stable.

His next big break came two years later, when, at the age of nineteen, he was given the pacer Josedale Clipper, whom he drove to the Maritime’s “Horse of the Year” honours.  With his talents now undeniably evident, he was asked to accompany Alberton’s legendary Joe O’Brien [inducted 1968] to Foxboro, Massachusetts, as trainer.  From that season on, he was to adopt the nomadic lifestyle of the North American harness driver. Regarded by many as the finest trainer-driver in the Maritimes, MacGregor would compile an amazing list of records and achievements over the next four decades.

His established track records took place at Quebec City in 1954, Summerside in 1955 with Bay State Pat, Sackville Downs in 1966 with Lace, Truro in 1967 with Dr. Harry C., and Springfield, Illinois with Ideal Donut.

For all these considerable accomplishments, the name Roach MacGregor is still linked in legend with that of Bay State Pat, the New England-bred gelding whose owner thought so poorly of the horse that he lost him in a poker game.  The new owner then promptly sold the lacklustre trotter to Summerside restaurateur Andy Perry for $260.  With that unfailing equine knowledge, it would be Roach MacGregor, then head trainer at Perry’s winter stables, who switched the discarded horse to the pace, with the assistance of horseman Chester Smith.  By 1954, the Pat’s second season on the pace, Roach and the horse had demolished all opposition in Eastern Canada, winning twenty-one straight races.  His 2:02/3 mark in Quebec City that year established the new Canadian record for a half mile track.  The horse from Houlton, Maine, the storybook rags-to-riches beast that nobody wanted, would eventually be inducted into Canada’s Harness Racing Hall of Fame.

Although he belongs to the U.S.T.A.’s illustrious “1000 Wins Club,” Roach’s contribution as a breeder in the Standardbred sport appears to be as significant as his driving career.  After so many long years on the racing circuit, MacGregor yielded to a lifelong dream, and the wise counsel of wife Carolyn, and laid plans for a permanent return to his native Island.  Purchasing 150 acres at Milton, Roach opened his fledgling breeding operation in 1970, and named it Glengyle Farm.

Within a decade, as a result of the magnificent crop produced by such top sires as Dominion Byrd, Newport Robbi, and Brightest Star, Glengyle Farm became a household name in eastern Canada.  That Glengyle tradition is evident in such sub 2:00 pacers as Whalers Byrd and Glengyle Joey, the latter horse selling for $26,000 at the P.E.I. Select Yearling Sale, a Maritime record.  April 1985 saw MacGregor become the first recipient of the Glen Kennedy Award, named in honour of the co-founder of the Atlantic Sire Stakes Program, in recognition of the MacGregor excellence in the breeding ranks.  Although the nursery faded from prominence over the next decade, the arrival of Arcane Hanover, the Confederation Cup winner, brought Glengyle Farm back to centre stage on the Maritime breeding scene.

From the beginning, MacGregor was a strong supporter of the Gold Cup and Saucer and local harness racing.  He entered some of his best horses in the Old Home Week race, helping to upgrade the calibre of this contest.  He not only taught Mike MacDonald [inducted 2009] some early lessons about harness racing, but convinced this great driver to help to make Maritime harness racing a bigger and better show.  In 1998, he also managed to talk his friend and top Canadian trainer Bill Robinson into coming out to P.E.I. with two of his best horses and campaigning at the C.D.P.

Roach MacGregor passed away suddenly on September 24, 2000 at his home in Milton.  His talents as driver, trainer and breeder, along with his tireless efforts on behalf of harness racing on P.E.I. in later years, will ensure that his legend is not soon forgotten.

The measure of greatness – that intangible quality in a reinsman and breeder which enables him to bring out all that speed and courage a racehorse possesses – belonged to such a man as James “Roach” MacGregor, the Master of Glengyle Farms.