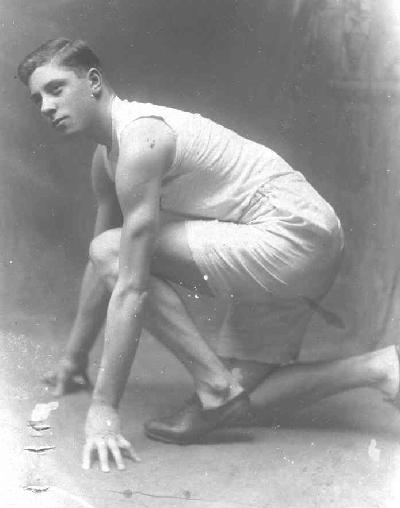 Very Reverend Dr. J. Elliott MacGuigan, S. J., was the son of the late Dr. J. A. MacGuigan and Mrs. MacGuigan of Charlottetown, and was a Jesuit Priest and Professor at St. Regis College, Willowdale, Ontario.

He was one of Charlottetown’s most outstanding athletes, a track and field star from 1920 through 1924, a winner of four events at the 1924 Maritime Track and Field Meet held in Halifax at the Wanderers Grounds. A feat accomplished only once previously in 1905, he placed first in the 100 yard dash, 220 yard dash, running broad jump and the standing broad jump. He was also a member of the famous Abegweit Track and Field Team from 1920-1924. This team won the
Maritime Track and Field meet for 24 consecutive years, 1900-1924. He won many local and provincial events under the colors of The League of the Cross from 1918-1924 and in his brief but illustrious athletic career he won over 50 medals and 20 cups. The highlight of his career was undoubtedly that great day in September 1924 in Halifax when he won 4 events.

The homecoming that he received in Charlottetown was one that is still talked about by many people, especially when athletes of another era get together. The newspaper story of the day says it all: “Elliott MacGuigan given great reception last night, citizens pay glowing tribute to young athlete who made such a wonderful performance in the Maritime Championship meet in Halifax.”

Elliott and his capable coach and trainer “Bill Halpenny” [inducted 1970] were met at the station by The League of the Cross band. They were given three rousing cheers by the hundreds in attendance and then paraded to the League Hall, where they were greeted officially by Mayor McKenna and other dignitaries.

One speaker said of Elliott,

“You are a model young man in every way and your athletic career and that of your coach Bill Halpenny has made Prince Edward Island famous in many parts of the Dominion. We are extremely proud of you.”

Elliott MacGuigan gave up his athletics in the mid-1920s to pursue a calling as a Jesuit theologian and educator in Ontario, but his sporting accomplishments remained inspirational to generations of young Islanders. He passed away on September 27, 1985, at the age of 79 in Pickering, Ontario.