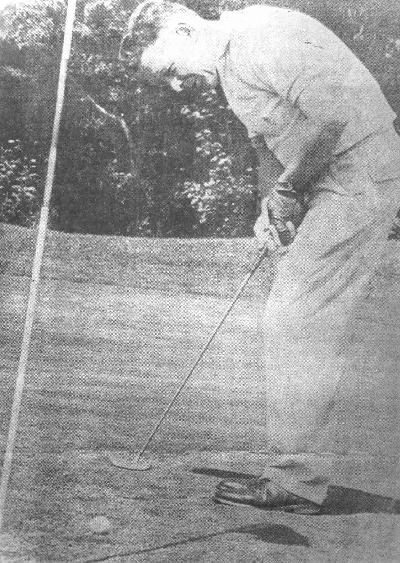 By far this province’s most consistent golfer from the mid-1950s to the mid-1980s, Art MacKenzie became a local legend for his coolness under fire, and his ability to stage the thrilling last round comeback that led to victory.  Born November 19, 1919, Charlottetown’s Arthur “Art” MacKenzie started out in the golf game as a caddy.  By the age of sixteen, he had won his first golf tournament – a 1937 caddies’ tournament.

Art joined the Canadian Army and served overseas until 1946.  That year, he captured the Charlottetown’s club championship, and repeated this win in 1948, after a year-long break from golf.  A natural athlete, Art MacKenzie’s perfect pivot and well-groomed swing were always at mid-season form, even in the first cool weeks of spring.  An excellent baseball and hockey performer in his early years, Art MacKenzie’s first big moment in golf occurred in July 1953, during the annual NB-PEI Amateur and Open held that year at Belvedere.  There, MacKenzie staged a driving finish to tie Bob Gray, a hockey-golf star, before winning the playoff on the first extra hole to take the two-province amateur crown.  1953 also marked the first time that Art MacKenzie was selected for the New Brunswick-Prince Edward Island Willingdon Cup Team.  Over the course of his career, he was chosen to participate in this prestigious interprovincial amateur golf classic on five occasions.

In 1960, Art became the first amateur golfer in the history of the PEI Open to take top honors.  In doing so, he carded the lowest three-round total seen in that golf tournament, a sparkling 215.

In 1962, Art MacKenzie accomplished another feat unequalled by any other golfer – a clean sweep of all the major provincial golf tourneys: the Green Gables, the Island Open, Island Amateur, Island Sectional, and finally the Pro’s Tourney.

A most popular and personable sportsman, Art MacKenzie was quick to share the golfing spotlight with his caddy after one of his numerous victories.  “I’d have to say that my caddy has been a standout help to me,” Art informed the press, “she’s more pleased with my success than I am.  She doesn’t play the game herself, but she sure knows it.”  That caddy, who remained his greatest fan, was Art’s wife, Vivien.

Art MacKenzie was honoured in a special tribute held at Charlottetown City Hall in 1962, for being the top golfer in Canada in that year’s National Hole-In-One Championship Golf Tournament.  He was also recognized in 1976 by the Belvedere Golf and Winter Club, when a large number of old and new members gathered for a banquet to recognize his contribution to golf on Prince Edward Island.

Art passed away on July 27, 1989 at his home in Charlottetown. The “Old red fox” of Island amateur golf will long be remembered as a golfer whose like will not probably be seen in this province for quite some time.