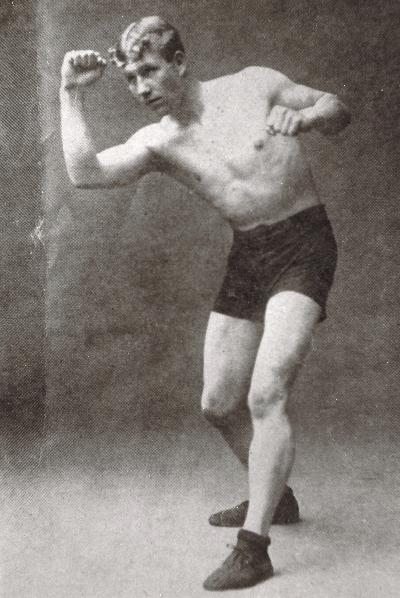 Big Bill MacKinnon was born in the Brackley Point district of P.E.I. on October 4th 1885.  His father and mother were Mr. and Mrs. Albert MacKinnon, and Bill himself was a blacksmith by trade.  Bill was five feet 10 inches, 170 pounds when he started fighting in the U.S. rings, managed by Harry Taylor of Boston.  He was trained by another boxer, Jim Kennedy of P.E.I.  In 1902, McKinnon took up residence in Roxbury, Massachusetts, one of the roughest towns in turn-of-the-century America, where many an Island boy came to seek fame and fortune. He began boxing as an amateur in 1904, and between this time and 1907, he fought 30 bouts, 29 of which he won.

At Cyress Hall in Cambridge, Massachusetts, in April of 1907, MacKinnon won two New England titles in the 160 lb. class.   He defeated George Sexton of Boston in the heavyweight semi-final and P. J. Williams in heavyweight final.  MacKinnon fought as a heavyweight because there was no light heavyweight division in boxing during this era.

Two weeks after the above fights, Bill MacKinnon entered the amateur tournament at Mechanics Hall in Boston, and won the amateur middleweight championship of America by disposing of John Reiss of New York and Pete Kenny of St. Theresa’s, P.E.I., another Island fighter of note.

Known as the “Fighting Blacksmith” or the “Old Trailblazer,” Bill MacKinnon started his professional career in November, 1907, engaging in a career that saw him take 116 fights from 1907 until 1922, when he retired from the ring.  From 1909 to 1916, he fought an endless number of fights, engaging the top rankers in North America, and his only set-backs in that period were losses to Jim Gardiner, in decisions of 15 rounds or more. Although fame came his way, he earned only a meagre fortune, arriving on the scene before the big pay-outs in boxing. His largest purse was for $1,113.50, still a tidy sum.

In his pro-career, he was never knocked out, and only once was he knocked off his feet, by Sailor Burke. He was stopped only twice, due to a dislocated right knee.

He fought only once in Charlottetown, when he boxed a 10-rounder to a draw with Roddy MacDonald of Glace Bay, N.S., in the old Arena on Fitzroy Street, and many old-timers remembered well this night of September, 1921.