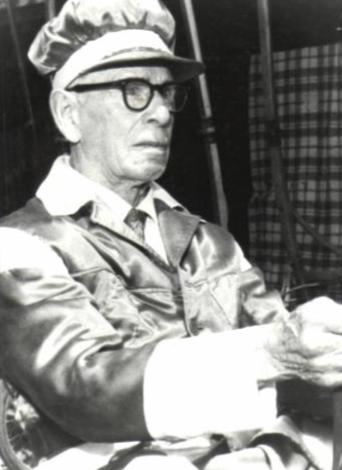 Affectionately known as “Col. Dan,” Lieutenant Colonel Daniel A. MacKinnon was born in Highfield, Prince Edward Island on November 12, 1876 and was active as a harness racing trainer and driver up until 1962, when he retired from the sport at age 85.  He was credited with having made his native province the “Kentucky of Canada,” and was known as the Father of Harness Racing in Eastern Canada.

Col. Dan was a USTA Director and Racing Promoter from 1930 to 1961, and was the first of two Prince Edward Islanders to be inducted into the Canadian Sports Hall of Fame, the other being Alberton’s Joe O’Brien [inducted 1968].

Col. Dan MacKinnon was involved with harness racing from 1912 to 1962, although he had been in love with the sport since 1890, when he purchased his first horse, and his record is most impressive.  In his career, he owned and drove or trained 78 horses.  He held the world ice-racing record at Mount Clemens, Michigan in 1923 with “The Yank”.  During a twelve-day period in 1915, he won 15 of 16 starts with the pacer “Helen R”.  At age 82, he was training and driving two horses regularly, the trotter “Windy Jane” and the pacer “Stalag Hanover.”

Mr. MacKinnon was also a fine individual athlete, winning the Maritime Mile Race in 1896, ’97 and ’98.  An excellent marksman, he was the leader of the Canadian Rifle Team which defeated Great Britain in 1912, and he personally won the Governor-General’s Award Medal in 1920.

Col. Dan had an outstanding First World War record, having been awarded the D.S.O. for outstanding service as well as the highest honour of France, the “Croix De Guerre,” for gallantry.  He was appointed aide-de-camp to Canada’s Governor General in 1923.

Harness Racing fans will remember his weekly column “Down the Back Stretch” which appeared for many years in the Charlottetown Guardian.

He died in 1964, at the age of 88, leaving behind a most distinguished career, ever to be remembered as a great contributor to the good life in Canada’s Garden Province.  Posthumously inducted into the P.E.I. Sports Hall of Fame on July 15, 1979, he is truly worthy of the honour bestowed upon his name.

In 2015, MacKinnon was recognized for his efforts in curling, by being inducted into the PEI Curling Hall of Fame. he was an early member and President of the Charlottetown Curling Club, as well as first president of the PEI Curling Association. He was captain of the first curling team to represent PEI off-Island.