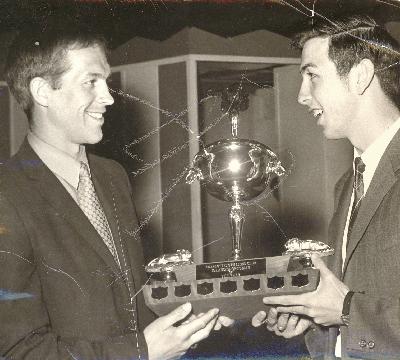 Bill MacKinnon of Charlottetown is undoubtedly one of the fastest runners ever to come out of Atlantic Canada. He rewrote almost every record book in the Maritimes, attended both national and international championships, and brought glory to his home province as a representative at the first ever Canada Summer Games.

In 1967, Bill broke his first record when he ran the 100 yard dash in 9.9 seconds at Charlottetown’s Labour Day meet, eclipsing the previous Island record of 10 seconds flat. This achievement was just a taste of what was yet to come. In the summer of 1968, he received widespread media attention when he first equalled the Maritime record for the 100 yards, with a time of 9.8 seconds at the Antigonish Highland Games, then bested this 28-year record, with a time of 9.5 seconds at the Atlantic Open Track and Field Championships in Moncton. Only a week after his Moncton victory, Bill travelled to the Olympic trials in Toronto, hoping to fulfill his dream of becoming the first ever Island sprinter to compete at the Games. This, alas, was not to be. Nevertheless, Bill received a hearty welcome when he returned home, and was named Sportsman of the Year for Prince Edward Island, a title he accepted with humility and grace.

In 1969, Bill’s sports star continued to rise with a gold medal victory in the 100 yard dash at the first Canada Summer Games, held in Halifax-Dartmouth. This win not only brought glory to P.E.I., but also served to silence those who laughed at the team from Canada’s smallest province, doubting their abilities due to their lack of proper training facilities. In this same year, Bill was also Eastern Canadian 100 metre champion, and came second in the 200 metre Canadian Championship. He finished off his season with an appointment to the first Canadian Pan-Pacific Games team, which represented Canada in Japan. Over the course of three Japanese meets, Bill took two gold, one silver and two bronze medals, and had one fourth place and one eighth place finish.

1970 saw Bill become the first and only Island athlete to be invited to compete in the prestigious Telegram Invitational Meet in Toronto. He also represented U.P.E.I. at the Canadian Intercollegiate Indoor Championships, where he finished second in the 50 metre dash. As a result of his many glorious accomplishments, Bill was inducted into the Prince Edward Island Sports Hall of Fame in 1971.

Bill’s involvement in sport was not limited to sprinting. He participated in other track and field events as well, including the running broad jump, before choosing to specialize in short distance running. He also played hockey, first with a Charlottetown hockey team that won the Maritime Juvenile championship in 1966, then with the Saint Dunstan’s Saints. Bill played with the Saints for two seasons, and travelled with them to the first ever Canada Winter Games in 1967 in Quebec City. Following his sprinting career, Bill coached P.E.I.’s 1973 Canada Games track team, and later the Kings County Junior “A” hockey team.

As an athlete who continued to improve on his own records and achieve more at the national and international level than any other Island sprinter of his era, Bill MacKinnon will not soon be forgotten in the annals of Island sports.

Bill sadly passed away in March 2020.