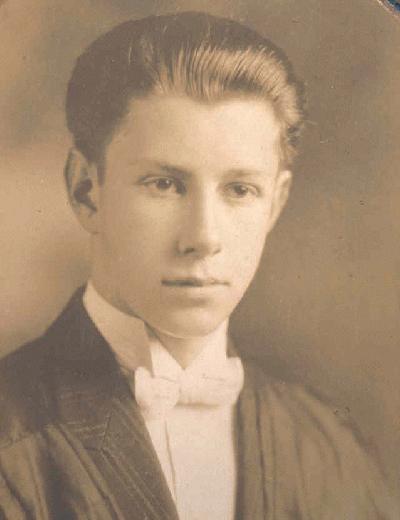 He was “the man with the right sense of values, the carefree smile and genial personality;” “a student of the highest merit” and “an athlete of marked ability” who “earned the admiration of all by giving his best in whatever he had to do.” And that description of Toby Macmillan, from the 1934 Acadia University yearbook, would not be changed or diminished in the decades that followed.

Born July 26, 1912, in Charlottetown, Alan Gordon “Toby” Macmillan seemed destined for a lifetime of achievement. His first teacher was his father, Toby Sr., himself an honoured member of the Prince Edward Island Sports Hall of Fame [inducted 1981], and so it is no surprise that Toby Jr. was well-trained in many sports at an early age.

While at West Kent School, young Toby excelled at hockey, rugby, baseball, and track and field, especially the shot put and pole vault. Among his classmates were Hall of Famers Johnny “Snags” Squarebriggs [inducted 2005] and Ivan “Hickey” Nicholson [inducted 1976], with coach Lou Campbell [inducted 1971] providing guidance on the sidelines. At Prince of Wales College, Toby played on both the hockey and rugby squads, as well as finding time to be a leading scorer on the Abegweit Intermediate hockey team and senior rugby team.

It would be Toby’s mother, herself a keen athlete, who first introduced him to the game of golf. Toby was strictly trained in the duties of a competent caddy before taking up the sport himself. Through the 1930s, he became one of the Island’s leading golfers, his name frequently appearing on Belvedere and provincial championships of the decade. An ardent supporter of the old NB-PEI Golf Association, which governed golf in both provinces (before the creation of the PEI Golf Association in the 1970s), Toby Macmillan was also a promoter of the Canadian Ladies’ Golf Association on both the provincial and national level.

In the early 1930s, Toby went on to Acadia University where his mentor and coach was none other than famed Island Abbie athlete, Fred Kelly. In 1981, Toby would follow Fred Kelly in becoming part of only the second group inducted into Acadia’s Hockey Honour Roll. Although his athletic activities were not confined to hockey – he also won a Varsity letter in track – it was in Canada’s winter sport that Toby made his mark, turning out to be one of the finest players ever to dress for Acadia. Rarely penalized, his play was always marked by smooth and powerful skating, amazing stick-handling ability and clean sportsmanlike conduct. Citing one memorable contest, Toby and the goalie were left to face four players of the opposing Kentville Wildcats for five minutes, and Toby prevented the Kentville squad from once getting their sticks on the puck.

Following his B.A. in economics at Acadia, Toby proceeded to Boston University, obtaining his Master of Business Administration (with distinction). At Boston University, Toby played centre forward for the varsity squad, which defeated the vaunted Harvard hockey team of 1936; he later became their assistant coach. This was followed by a year of post-graduate study at the London School of Economics, where he found time to play hockey for the English National Team, winners of the 1937 World Championship at St. Moritz, Switzerland. Toby was therefore able to claim to be one of only a handful of Island athletes to have played on a world championship team. Only an old aggravating knee injury prevented him for even greater hockey triumphs.

In 1941, Toby joined the Royal Canadian Air Force, retiring in 1945 with the rank of Wing Commander. Returning to his native PEI, he joined the family firm of Hyndman and Company. Golf continued to be a prime interest of his, and in 1947, Toby became a director of the Belvedere Golf and Winter Club, serving as its president from 1949 to 1951. It was during this tenure that he and Douglas H. Saunders were directly responsible for the rebuilding of the Belvedere golf course following its restricted wartime program. He continued to serve on the club’s Long-Range Planning Committee.

Appointed the Royal Canadian Golf Association governor for Prince Edward Island in 1974, Toby Macmillan served the Association for the next ten years on such committees as handicapping, course rating, junior development and finance. Throughout this period Toby gradually encouraged the Island golf clubs to become active members of the R.C.G.A.

In 1984, he was the R.C.G.A. chairman for the first Canadian Senior Golf Championship ever played on Prince Edward Island. Some three hundred senior golfers from across Canada competed on the Belvedere and Brudenell courses, making this the largest entry in the tournament’s history. At the closing Championship Dinner, Toby would be presented with an award from the P.E.I. Golf Association in recognition of his many years of tireless service to the game of golf. In 1989, the association created an annual award in his honour, the A.G. (Toby) Macmillan Award, presented to “the achiever of the year in recognition of outstanding individual contribution to golf on Prince Edward Island.” A similar honour paying tribute to his contribution to golf would come in the form of an Honorary Membership in Duck Acorn’s popular “Over 50 Club.”

The combination of Toby’s gentle manner and sense of humour provided a refreshing change at golf’s administrative level. Following his ten years of service as the Royal Canadian Golf Association’s Governor for Prince Edward Island, Toby Macmillan was named an Honorary Governor of the Association, affording this province two representatives on the R.C.G.A., for the first time in its history.

A promoter of the Ladies Golf Association at both the provincial and national level, Toby would also be active in the R.C.G.A.’s Golf Foundation of Canada, particularly the foundation’s maintenance of the Canadian Golf museum at Glen Abbey.

Among his involvements in the community affairs of this province, Toby was Air Force Aide-de-camp to the Lieutenant-Governor from 1950 to 1958; he served on the P.E.I. Hospital Board of Trustees from 1960 to 1980, and acted as Chairman of the Board from 1977 to 1980.

Immediately following the war, Toby was appointed to the P.E.I. R.C.A.F Benevolent Fund, where he became the provincial chairman of the board in the intervening years. In 1951 he was appointed to the Charlottetown board of school trustees, where he remained until 1971, when the Charlottetown board was incorporated into the provincial board of education.

Distinguished in the business affairs of his province, exemplary in his devotion to family and community, Toby’s love for the sporting life was without parallel. The Prince Edward Island Sports Hall of Fame was honoured to have Charlottetown’s Alan Gordon “Toby” Macmillan, a gentleman and a scholar, as one of its 1987 inductees.