View All Inductees
James "Toby" MacMillan - Hockey
Inducted on May 31, 1981 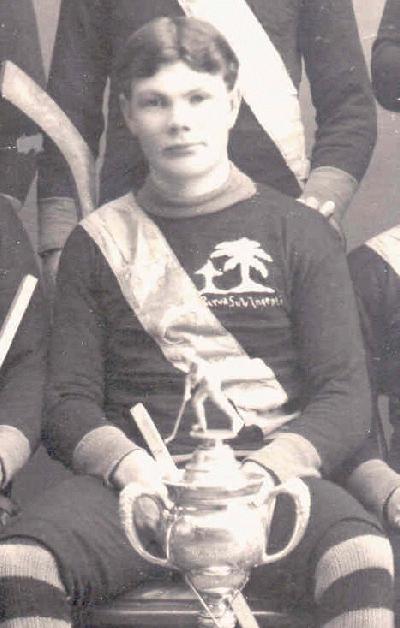 Outstanding in track and field, hockey and rugby, accomplished in several other sports, and destined to become one of the Island’s most prominent athletic officials and administrators, James “Toby” Macmillan was born on March 1, 1883, in Wood Islands, PEI. At an early age Toby moved with his family to Charlottetown, and became part of the amazing Abegweit Amateur Athletic Association teams, several other members of which are also Hall inductees. Even at the height of his athletic career, while simultaneously balancing his positions as hockey and rugby team captain, Toby assumed major administrative responsibilities with the Abegweits, becoming president of the organization in 1905.

As an athlete, speed was Macmillan’s trademark. He excelled as a sprinter in track, winning the 100 and 220 yard events on numerous occasions in regional competition, and was Maritime Champion in both events in 1901 and 1906. Toby played halfback with the Abbies rugby teams at a time when they were recognized as one of the best in the region, attracting intense spectator and press interest in the sport. The electrifying speed that characterized Toby’s rugby playing style was responsible for much of this attention by Maritime fans. Toby’s speed also contributed to his hockey talent, and he proved to be a devastating cover point for Abbies teams. The hockey Abegweits would win the Island Championship on five occasions from 1902 to 1908, travelling throughout the Maritimes to play exhibition games and challenge for the Starr Trophy, representing senior amateur hockey supremacy in the Maritimes.

In 1901, at age 18, Toby Macmillan became a member of the senior Abbies rugby team, which tied for the league championship in 1905, and eventually won the title and the Bartlett Cup in 1906, 1907, 1909 and 1910. During his twelve years of rugby, Toby was always a scoring threat, providing team leadership as the Abbies’ captain.

Toby Macmillan’s first hockey games were played for the 1901 senior Abbies, coinciding with the team’s return to hockey supremacy on the Island. In 1902, the Abbies regained the championship and retained it for five of the next seven years, owing in significant degree to Toby’s playing skill and leadership. He led the team in scoring and was its captain throughout the period.

As his active participation in athletics began to decline, finally ending in 1909 primarily due to injuries, Macmillan became a respected official in hockey, track and rugby. On several occasions, Toby was selected to officiate highly controversial games, when opposing teams needed to agree upon a referee who each recognized as fair and unbiased.  He also devoted a great deal of his time and energy to the development of hockey on Prince Edward Island.

The success of Abegweit track and field teams resided in the fact they put forward strong performers in all events. A glance around the Hall of Fame reveals several of Macmillan’s teammates; Bill Halpenny [inducted 1970] dominated vaulting and jumping, and Bob Donahoe [inducted 1977] was the club’s strong 440 yard man and broad jumper, while Toby and W. H. Ritchie excelled in the sprint competitions. The Abbies’ dominance in Maritime track and field circles for the next several years was perhaps centered on Toby’s holding of Maritime championships in the 100 and 200 distances, and his inspired yet quiet example of leadership.

James “Toby” Macmillan died on March 14, 1941, and his election to the Hall of Fame 40 years later represented a tribute to an embodiment of sports’ highest ideal – excellence combined with the sense of fair play.