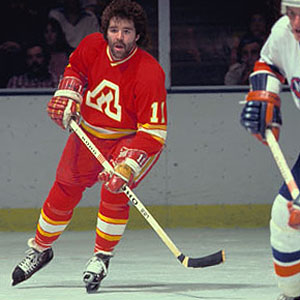 Bob MacMillan has done himself, his family and his native Prince Edward Island, proud.  He accomplished something that only one other Maritimer has been able to do, in being named the N.H.L.’s Lady Byng Trophy winner for the 1978-79 season.  Certainly a worthy recipient of the trophy, which is emblematic of the player judged to have displayed the most gentlemanly conduct matched with playing ability, the Charlottetown native, performing with Atlanta Flames, amassed 108 points in 79 games, made up of 37 goals and 71 assists and drew only 14 minutes in penalties.

Robert Lea MacMillan was born in Charlottetown on September 2, 1952.  Raised by his mother after his father passed away, Bobby grew up idolizing his hockey playing older brother Billy [inducted 1985], who had played in both the Olympics and the N.H.L.  A product of the Charlottetown Minor Hockey System, Bob was one of eight players who graduated from the Charlottetown Junior Islanders of the early 70s and go on to a professional hockey career.  After finishing his time in Junior Hockey with St. Catharines’ Black Hawks, Bob was drafted by the New York Rangers in 1972, but chose instead to perform in the W.H.A. with Minnesota for two seasons.  He eventually moved to the Rangers in 1974-75 and played 22 games with the Broadway Blue Shirts (his first NHL goal came on Jan 4, 1975 against the local rival Islanders) before being shipped off to Providence of the American Hockey League for the remainder of the season.  In September 1975, Bob was traded to St. Louis where he spent almost two seasons. During his first season with the team, Bob equalled one rookie record and broke another two; he scored 20 goals to equal the rookie record of Mike Murphy, established in season 1971-72, picked up 32 assists to break the rookie-record of 30 established by Bob Ness in the 1974-75 season, and amassed 52 points to beat Mike Murphy’s rookie-record set in 1971-72.

These records are impressive, but it was upon moving to Atlanta in 1977 that Bobby really found his shooting eye.  In 52 games with the Flames, he averaged a point a game, potting 31 goals and garnering 21 assists.  The following season would be the best of his hockey career: he more than doubled his number of points and was awarded the prestigious Lady Byng Memorial Trophy. In honour of this incredible accomplishment, Bobby was inducted into the P.E.I. Sports Hall of Fame on July 16, 1979.

In the spring of 1978, Bob MacMillan was chosen as a member of Team Canada when they took part in the World Championships in Prague; the team placed third.  Professionally, Bobby continued to play for the Atlanta Flames, which became the Calgary Flames in 1980.  He then played for the Colorado Rockies in the 1981-82 season, followed by two seasons with the New Jersey Devils.  In the 1984-85 season, he played with the Milwaukee Admirals of the International Hockey League, before returning to the N.H.L. to play one season with the Chicago Blackhawks.

Upon his retirement from the professional leagues, Bobby returned to Prince Edward Island, where he coached Senior hockey. He returned to the ice briefly, when he dressed for two games with the Charlottetown Islanders, scoring four points.

More recently, Bobby pursued a career in politics, serving in the P.E.I. Legislature with Pat Binns’ Progressive Conservative Party from 2000 to 2003.  Although his playing days are over, the talent and kind-hearted nature of this Island star will not soon be forgotten.  His son Logan is carrying on the family legacy of outstanding hockey performance, as a member of the gold medal-winning team at the 2006 Under-18 World Junior Championships, and a current player in the Quebec Major Junior League.