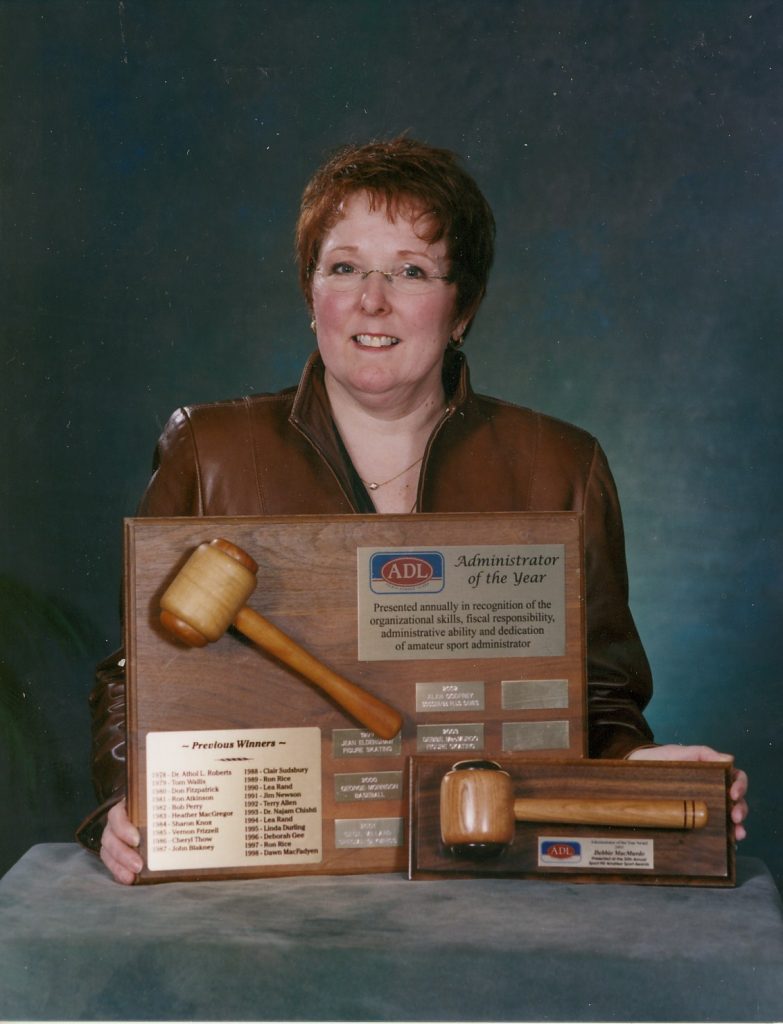 Born in Summerside, PEI on May 23, 1956 Deborah J. MacMurdo would become one of the most influential people in figure skating not only on Prince Edward Island but across Canada.

She began skating as a child on outdoor rinks in her backyard in Kelvin Grove and in 1968 when the Kensington Figure Skating Club was created she began taking skating lessons. Her interest grew in the sport which would lead her to become a competitive skater. She later took on many roles such as amateur coach, judge, technical liaison and team manager. Debbie did not stop there; she became involved in the administrative area becoming a board director and committee chair at the provincial and national levels for three decades.

As a teen Debbie became a National Skating Test amateur coach, helping the professional coach teach younger skaters. At age 16 she became a judge and has officiated at many test days and competitions. She was the Island’s first Gold Level Judge and continues to be the Province’s first and only Canadian Singles judge having judged at many National Championships. She will continue this tradition at the 2018 National Championships in Vancouver.

Canada Games have been a big part of Debbie’s sport involvement; she was named an alternate for the PEI figure skating team for the 1975 Games in Lethbridge, Alberta and in 1983, was manager of the Island team for the Winter Games in Saguenay-Lac-St-Jean, Quebec. She acted as a judge at the 1987 and 2011 Games and a Technical Representative for the 1991 Canada Games in Charlottetown. Debbie was also a PEI Mission staff member in 1995 and a member of the Provincial Canada Games Committee and VP Sport and Board of Management member for the 2009 Canada Summer Games.

Debbie became a Technical Representative responsible for the oversite of all technical aspects of the competition working with officials, coaches, skaters, volunteers and Television. She started this role at the sectional and divisional level in the late 1980’s. In 2001 she was appointed to the same role at the national level and continued to serve for 18 National Championships and 7 Skate Canada International events.

Debbie was on the organizing committee as Sport Technical Manager for the World Figure Skating Championship that was held in Calgary in 2006. In 2009 she had the role of Field of Play On-Ice Supervisor for the ISU Four Continents International, which was the test event for the 2010 Vancouver Olympics.

The highlight of Debbie’s career came when she was one of the first volunteers assigned to the 2010 Vancouver Olympics as Field of Play On-Ice Supervisor. She worked directly with ISU officials ensuring that the athletes had the best environment to compete and worked closely with team managers and athletes from participating countries. In 2013 she was named Technical Liaison for the World Figure Skating Championships held in London, Ontario.

Debbie was involved with the Skate Canada Board of Directors for 27 years before stepping down in 2014. At Skate Canada’s annual meeting in Quebec City in 2014 she received the Billy Mitchell Award for outstanding contribution to the board becoming only the second person to receive this award twice. She also became an Honorary Member of Skate Canada, only the 37th person in the history of Skate Canada to receive the honor.

During her time as a board member she held many roles.

Prior to becoming Chair of Skate Canada PEI in 1985 she held various board positions. She was one of the original members of the committee that established the ADL Junior Figure Skating Championships that have been held in Kensington for over 30 years.

Debbie was elected as a Director of the Canadian Figure Skating Association now known as Skate Canada in 1987 and assigned to the Chair of Rules and Technical Advisory for a four year term. She was a member of the Rules committee from her first year on the board in 1987 until 2014.

She Chaired or was a member of almost all committees of CFSA/ Skate Canada, far too many to share with you tonight . Some highlights were Chair of Skating Programs Committee that developed the STARSkate Program that is still in place today; Chair of the National Skater Development Committee with committee members creating a resource booklet called “Parents Guide to Test and Competitive Skating”; Member of the Coaching Advisory Committee which had a strong link to the development, promotion and execution of programs such as CanSkate, StarSkate, CanPowerSkate, as well as the competitive and test structure.

In 1996 Debbie stepped down from the board but was asked by the president to Chair the National Judges Committee. She understood that officials were volunteers and the importance of encouragement of individuals to pursue their passion of skating through officiating. Debbie has been involved in the delivery of judges and evaluator training and today serves as a member of the Officials Assignment and Promotion Committee.

In 1998 Debbie returned as a Skate Canada Director and was elected Vice-President of Skate Canada from 2002 to 2011. She played a role in the restructuring of the Skate Canada Board going from 35 to 14 members. In her final years on the Board she became involved in Membership Policy and Board Governance. One of the most important tasks Debbie was responsible for was the consultation and implementation of the new Skate Canada Bylaws to comply with the Canada Corporations Not-for-Profit Act.

Since retiring from the Skate Canada Board, Debbie has continued to be a member of many committees both at the national and provincial level.

She was not only involved in administration, she was a Team Manager for Skate Canada at a number of international events including the World Junior Championships in 1994 and 2002 and the World Championships in Helsinki, Finland in 1999.

Debbie’s involvement in sport administration was not limited to Figure Skating. She was a board member of Sport PEI from 1993 to 2002 serving as a director, secretary, Vice-President and President. When the National Special Olympics were held in PEI in 2004 she was Chair and Technical Representative for Figure Skating.

Debbie was also a Director of the UPEI Alumni Association from 1979 to 1981.

There have been many awards for her over the years; a few of those are:

CFSA Longines Judges award presented in 1989
Sport PEI Official of the Year in 1989 and 1994
Skate Canada PEI Volunteer of the Year in 1987 and 2002
125th Queens Jubilee Medal for Outstanding Contribution to the Community in 1992
The Volunteer Award of Excellence from Skate Canada in 2002
Sport PEI Administrator of the Year in 2004
Canadian Association for the Advancement of Women in Sport Award for most influential women in sport and physical activities. The awards were made by the Canada Games Council in 2010 as a result of her being a member of the Management Board of the 2009 Canada Games held on Prince Edward Island
Sport PEI President’s Award in 2012 for her significant contributions to amateur sport in PEI
An Honorary Life Member of the Kensington and Area Figure Skating Club.
Despite all of her time devoted to figure skating, Debbie had a successful career in Human Resources and Skills Development on PEI. She completed Grade 8 from the Toronto Conservatory of Music in piano. Debbie was PEI Windsurfing champion and also has enjoyed running, curling, golf, and skating.

Debbie MacMurdo was the ultimate volunteer when it came to figure skating.

She was asked why she decided to stay active for so long in the sport to which she responded: “Passion is key to making a difference, volunteerism is rewarding and a way to give back, and you are only as good as the people around you.”

Deborah MacMurdo, a 2017 inductee into the PEI Sports Hall of Fame. 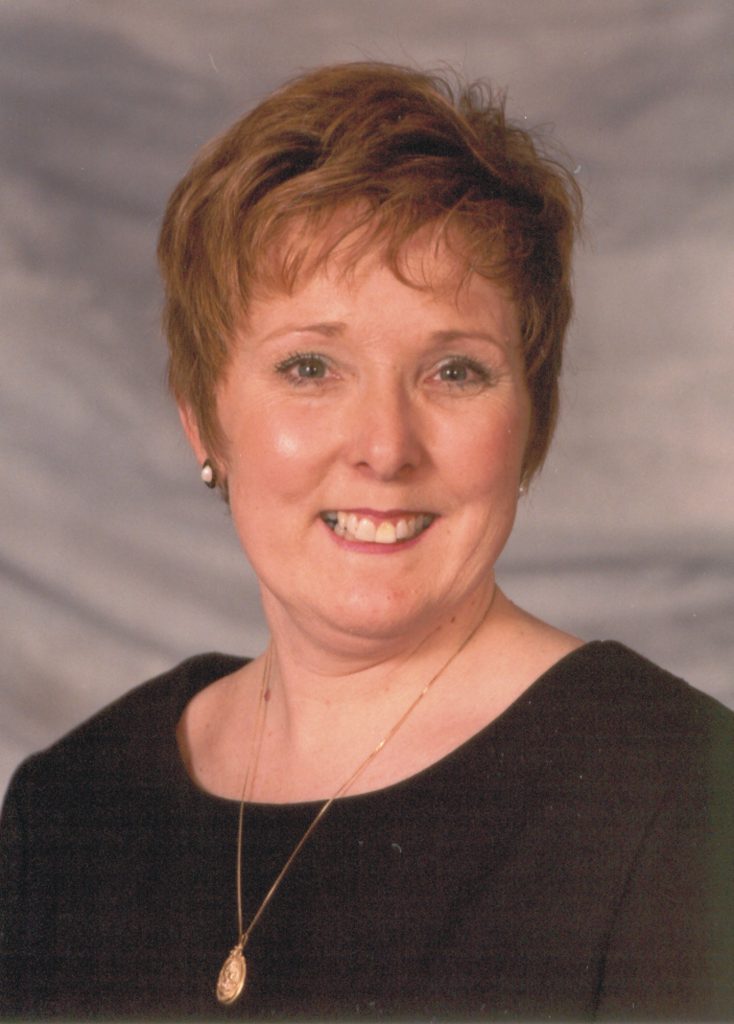