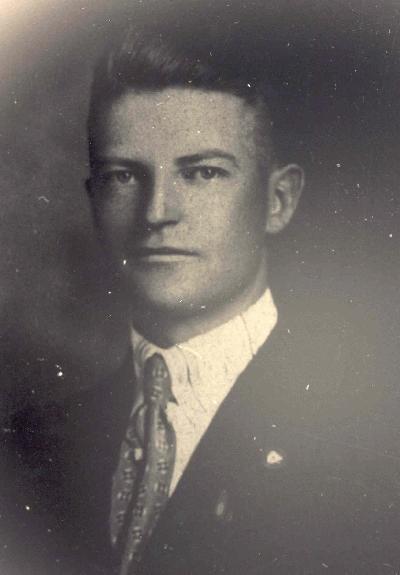 Summerside native Ernest N. “Whitey” MacQuarrie starred in baseball and hockey from 1908 to 1926.  He was also a notable swimmer, a low handicap golfer and an owner and driver of harness racing horses.  He played ball with both the Summerside Red Socks and an Island All-stars team between 1908 and 1916; however, most will remember this Summerside native for his hockey prowess.

Born in Summerside on September 10th, 1893, Ernest MacQuarrie learned his hockey skills on Taylor Pond, on the Summerside Harbour, and at a local outdoor rink on Foundry Street.  From a small team called the Invincibles, which practiced in the old Crystal rink, Ernie graduated to the Intermediate Crystals in 1908, and then to the Senior Crystals in 1910.

A defenseman, he became known as a fierce body checker in the days of the seven-man team.  Seven-man hockey provided for no relief – all players had to be on the ice for the full 60 minutes of game time.  Because of his ruggedness, Ernie was instrumental in leading the Summerside Crystals to victory in the Island Senior League Championship in the 1910-11, 1911-12 and 1912-13 seasons.

During the war years, Ernie served overseas with the 105th Battalion.  Upon his return in 1919, he participated once again in senior hockey on P.E.I. – now in its modern six-man phase – until 1926.  He captained the 1919-1920 Crystals to victory in the Island Senior League Championships, a championship the team would take once more before Ernie retired from the sport.  Ernie’s outstanding skill on the ice was recognized by many, and he received several offers to play in a semi-pro league; however, he was obliged to decline these offers due to his position in the business world.

Ernest “Whitey” MacQuarrie was a staunch advocate of physical fitness throughout his life, and over the years was always conscious of his own physical condition.  His desire to play the game to the best of his ability, never giving any quarter, made Ernie MacQuarrie an inspiration to all who came in contact with him. It is for these many reasons that in 1974, the Prince Edward Island Sports Hall of Fame chose to induct Ernest “Whitey” MacQuarrie.

Ernest MacQuarrie passed away on December 23, 1981.