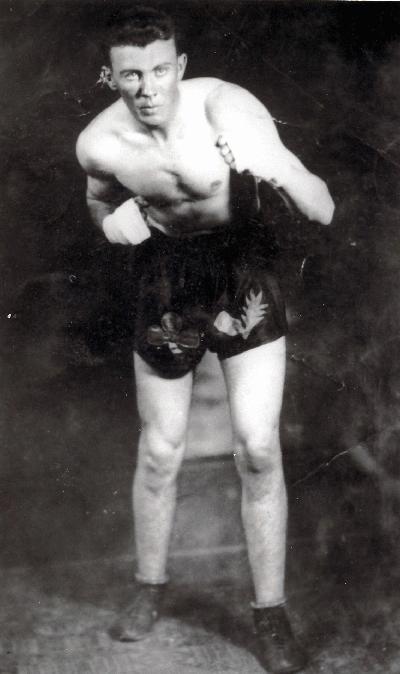 Middle and lightweight champion of Prince Edward Island in the golden decade of professional boxing, he represented everything that was good in his sport: courage, high principles, and the competitive instinct. It might well be said that the province never had a champion more respected or better loved than Danny McCormack.

Born June 14, 1916, on the Souris Line Road, Daniel Joseph McCormack was one of twelve children, and destined to be one of the top club fighters of his era. Receiving his education at Souris High School and Saint Dunstan’s College, Danny fought under the symbols of the shamrock and the thistle, indicators of his rich Scottish and Irish ancestry.

The thirties were the golden age of Island boxing. Unheard of were the speed bags, weights and exercise bikes we associate with the sport today. A boxer in that time proved himself in make-shift rings before capacity crowds, not in mirrors. Every summer, at Charlottetown’s Sporting Club or at the Forum, or perhaps in Souris, Kensington, Mt. Stewart or the old Crystal Rink in Summerside, the fans gathered. Sunday was dance night, but by Monday the dancing platform gave way to the boxing ring, and local heroes such as Jimmy Evans, Benny Binns, or Big George Leslie from Souris stepped into the spotlight.

Danny’s first fight in 1936 netted the green youngster only five dollars. Even his best purse would only be $75, for a fight with Leo Kelly. Possessing neither manager, nor coach, nor cut man, Danny’s two-fisted style of boxing made him as popular with the locals as it would with his future army mates. Calling himself a “busy fighter who took the centre of the ring and stayed there,” Danny McCormack’s ring career at home and overseas reveals an enviable record of sixty wins, ten losses and one draw.

A believer in conditioning, Danny’s arms and legs grew rock-hard, not from gym sweat, but rather from honest Island labour. In pre-war days, when a man could shovel sand at North Pond for $2 a day, Dan hit the shovel hard, loading it by the truck-load for a Nova Scotia glass factory. Despite an offer from Jack Sharkey’s manager to become a club fighter in Boston, McCormack preferred he simpler beauties of Prince Edward Island.

Holder of both the Island middle and lightweight titles by 1939, Dan continued his boxing success following enlistment as a gunner in the 2nd Battery. Army life increased the young man’s bulk, and in 1940, he would win three light-heavyweight titles overseas: the Aldershot and Borden camp titles, as well as the Army 1st Division. Selected to the British Army Boxing Team, Dan would compete against top-ranking air-force and navy fighters. Closing out his boxing career, McCormack, who had recently been made a lieutenant, took time out in southern Italy to win the service’s lightweight division as the troops were working their way to liberate Rome.

An all-round athlete, Danny McCormack did not even own a pair of skates until the age of sixteen. Despite this, during his years at Saint Dunstan’s college, from 1933 to 1935, young Dan would play fourteen hockey games in goal for the school, allowing only two goals per game. Protection for the net-minder of that era meant old scarves stuffed up the sleeves of one’s hockey sweater.

Besides performing on the college’s baseball team, Dan would be best remembered at Saint Dunstan’s as the crafty and daring “heeler” at the front of the scrum for the school’s excellent rugby squad. In much later years, McCormack would prove himself a winning curler, bowler and golfer.

Following his return to the Island after the war, Dan McCormack joined the executive of the famed Abegwiet Athletic Association, as its baseball representative. A player, coach and manager in the Island Senior Baseball League, as well as City Baseball League president, McCormack would succeed Ivan Doherty [inducted 1995] as president of the bustling Island Senior Hockey League.

With the demise of baseball as a top sport locally, and the growth of softball as an attraction, Danny jumped into the City League with an Abegweit entry. He would later take over coaching duties with the Junior Basilica Youth Club, guiding his boys to the Maritime Intermediate “B” Softball title in 1960, the first time that any Island team had ever won a Maritime softball crown.

Throughout his life, Dan McCormack demonstrated a relentless quest for excellence, in others and in himself. His distinguished military career spanned three decades, during which he rose through the ranks, from gunner to artillery observation pilot, winning his commission in July 1943. Appointed Commanding Officer of the Light Artillery Regiment in 1953, and the Commanding Officer of the P.E.I. Regiment in June 1961, Dan McCormack would become Militia Adviser for this province with the rank of Colonel on January 1, 1965.

Colonel Dan McCormack was first elected to the Ward 2 councillor’s seat in 1968, winning re-election in 1971. Among his civic accomplishments, McCormack would be chairman of the Royal Visit of the Queen Mother in 1973. A source of pride remained his chairmanship of the Charlottetown Recreation Committee, during which he was responsible for the construction of the Simmons Sports Centre, the swimming pool, three new tennis courts and four softball diamonds.

A distinguished and productive public career, a lifelong involvement in sport as an athlete, coach and administrator, the name McCormack has always meant courage and leadership. The Prince Edward Island Sports Hall of Fame was pleased to induct Colonel Daniel Joseph “Danny” McCormack, CD, of the Souris Line Road and Charlottetown in 1986. Danny McCormack passed away October 31, 1995 in Charlottetown, at the age of 80 years.