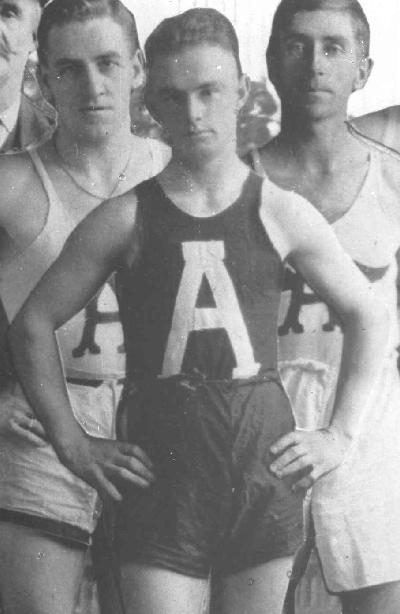 One of the finest all-round athletes to be produced by Prince Edward Island was John “Whackey” McEachern.  Born at the turn of the century, Whackey’s involvement in sports began during his time at West Kent school, and was supported by his father James McEachern, a former champion pole vaulter. Despite his small stature, Whackey excelled in every sport in which he participated.  An explosive and temperamental performer, he was a dangerous open-field runner in rugby, and a star on the basketball court.

As a member of the Charlottetown Abbies team, he excelled at track and field sports, with his specialties being the running broad jump, the high jump and the 100 and 220 yard sprints. Upon placing first in the broad jump at the 1920 Maritime Track Meet, Whackey was selected to attend the Olympic trials in Montreal. He was not awarded a position on the national team due to the presence of other formidable athletes.

Baseball is another sport in which Whackey McEachern left his mark. He was renowned as an excellent short stop and pitcher, but his hitting ability was also impressive. During a game with the Abbies on the mainland in the mid 1920s, he is said to have made the longest hit ever seen in a Nova Scotia game. In addition to playing ball for the Abbies, Whackey also a member of two other Charlottetown ball teams, the Madisons and the Gayetown Rovers, at different points during his career.

Hockey is perhaps the sport for which Whackey is best remembered. He was a member of the famously unbeaten 1920-21-22 Abbies, who were Maritime Provincial Champions for three consecutive years. In 1924, he was singled out by Art Ross, general manager of the Boston Bruins as a promising prospect – Ross intended to bump Whackey up to the professional league should one of his Bruins have been injured that season. While waiting to play professionally, Whackey briefly joined the Quebec team the Sons of Ireland; however, his ties to the Island were too strong, and he returned to Charlottetown, hoping to rejoin the Abbies. This return was thwarted by the Maritime Amateur Hockey Association, who found several technical faults with the paperwork releasing him from his position with the Sons of Ireland.  This delay outraged teammates and fans, who were willing to take the issue all the way to a judge of the P.E.I. Supreme Court in order to see their hometown star back in action. Although never reaching the NHL, Whackey did play in a semi-pro league with a team in Waterville, Maine in 1927 and 1928.

In 1939, Whackey joined the Royal Canadian Signal unit in Charlottetown, serving in Newfoundland and England during World War II. In 1945, he returned to Charlottetown, where he remained until his death in 1964.

Inducted into the P.E.I. Sports Hall of Fame in 1969, John “Whackey” McEachern’s sports feats will not soon be forgotten. Even today, 45 years after his passing, the memory of this small, volatile and talented sportsman is alive and well.