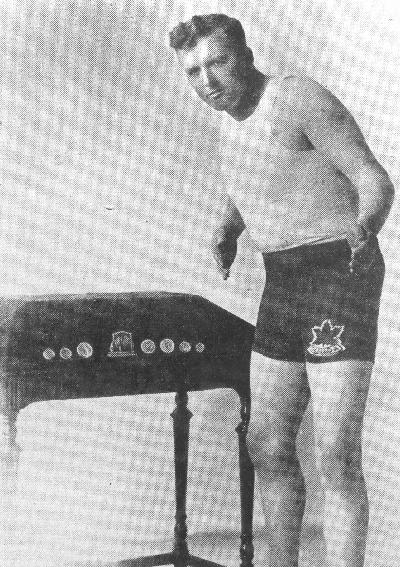 William Lloyd McIntyre was a renowned wrestler on the provincial, national and international scene from 1927 through 1930. Born March 16, 1900, this native of Mill Cove, Prince Edward Island had a rather unique career as a wrestler.

Growing up, athletic endeavours were an important part of the McIntyre household, with Lloyd’s father leading the way in family sporting activities. Lloyd attended St. Dunstan’s University, where he played rugby from 1918 to 1920, during which time the team was never scored upon. In 1921, he moved to Manitoba, where he joined the Winnipeg police force. When the force held their annual track and field days, he participated in all sports. It was in wrestling, however, that he first chose to specialize.

McIntyre was both Provincial Champion of Manitoba and Dominion Champion in wrestling for four consecutive years. He was the winner of a gold medal presented at the first ever British Empire Games (now the Commonwealth Games) held in Hamilton in 1930. Lloyd had been competing in the Light Heavyweight Division, and won the gold thanks to a victory against an English champion named Bacon. “We had a great match’” said McIntyre years later. “I must have taken off seven pounds.” In fact, Canada’s wrestling team swept all gold medals at the British Empire Games that year, a feat repeated only once, at the games held in New Zealand in 1974.

With the police, Lloyd also became an expert shot, and was considered one of the finest revolver experts in Canada. He won the Dominion of Canada Revolver Championship, among many others; years later, he stated, “if I had kept the replicas of every shooting trophy I won, my house would be full of them.”

But for financial problems, with respect to sporting events in general in that particular era, McIntyre would have competed in the Olympic Competitions, but instead he retired in 1930, following his victory at the British Empire Games. Through all of his bouts, he had never been defeated.

“I always enjoyed the fellowship which existed between athletes,” said McIntyre. “In all my sports, I enjoyed the competition.”

William Lloyd McIntyre certainly had a brilliant and unique career in the sport of wrestling. He passed away in Corran Ban on August 2, 1975, and was posthumously inducted into the Prince Edward Island Sports Hall of Fame on July 16, 1978.