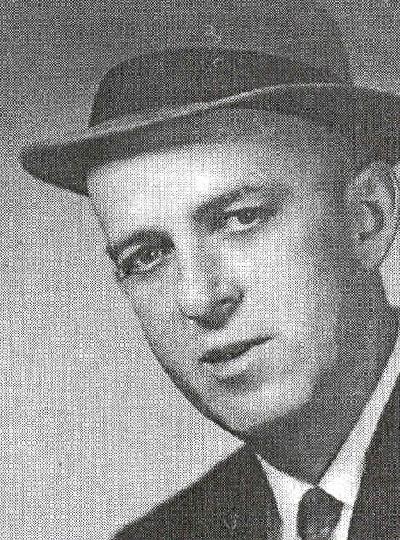 John “The Realm” McNeill is considered by many to be a legend in local sports reporting. His popular column “The Realm of Sport” ran for 56 years in the Journal Pioneer, where he touched the lives of thousands of Islanders. When his last column was published in 2001, he had written approximately 36 million words, mostly typed one-fingered on his trusty typewriter, a cigarette dangling from his lips.

McNeill was the fifth child in a family of twelve, born to Daniel and Pearl McNeill on September 15, 1918. Daniel McNeill was a town councillor in Summerside for 14 years and had additionally been elected as the local MLA at the time of his death in 1946.

Prior to the Second World War, John worked as a paper-boy for the Halifax Herald, later becoming the Herald’s Island Page correspondent for 18 years. Shortly after getting out of the Royal Canadian Navy’s Volunteer Reserve at the end of the Second World War, John confronted the managing editor of the Journal, J.R. Brennan, at a local cafe. He wanted to know why the newspaper carried no sports coverage. Brennan challenged him to write a sports column and McNeill accepted.

John’s column debuted in the Journal on May 17, 1945. Initially entitled “The Realm of Sport, Conducted by John W. McNeill,” it was thus named by the Journal’s publisher at that time, J.J. Enman. For the next decade, this column represented the Journal’s only sports coverage.

Despite the athleticism of some of his family members – including niece and Hall of Fame inductee Barb McNeill [inducted 1990] – “The Realm” was a self-professed “frustrated athlete” as a youth. Decades later, he would laugh at his own unsuccessful athletic endeavours. “My brother Tanton threw me off his softball team because I couldn’t hit and couldn’t field,” said McNeill in a 2002 interview.

Although unsuccessful as an athlete, he made considerable contributions to sport in the management and administrative ranks. He served as secretary-treasurer for various sporting bodies and teams, including four Maritime intermediate baseball champions. He was the first secretary-treasurer for the P.E.I. Sports Hall Of Fame, retaining this position for many years. He was also a long-time bulletin editor for the George R. Pearkes V.C. Branch of the Royal Canadian Legion in Summerside. Additionally, he co-hosted a popular local radio sports show, The Hot Stove League, along with broadcaster Bob Schurman [inducted 1973] and Guardian sportswriter Norman Macdonald [inducted 1969].

The Realm’s contributions to local sports have been recognized on several occasions. In 1988, Summerside City Council dedicated a room in the city’s recreational centre as the “John ‘The Realm’ McNeill Nostalgia Room.” Upon the fiftieth anniversary of his column’s publication, May 17, 1995, city council officially proclaimed “John ‘The Realm’ McNeill Day,” complete with a sold-out testimonial dinner. And in April 2006, Special Olympics P.E.I. named an award in his honour, to be presented monthly to an athlete who displays outstanding sportsmanship and fair play.

“His columns have touched thousands of people involved in sport in P.E.I. over the past four decades, and most agree that the various sport disciplines have benefitted from his efforts,” proclaims a citation from the dedication of Summerside’s John “The Realm” McNeill Nostalgia Room.

John McNeill died on the 25 February, 2006, at the Wedgewood Manor in Summerside. He was 87 years old.

File Contains: “Heroes Of Island Sport” by Wayne Wright; obituary and tribute articles; various photos and board composites; various “Realm” articles; numerous letters of support and clippings; appears in two photos of Hall Of Fame Board of Directors