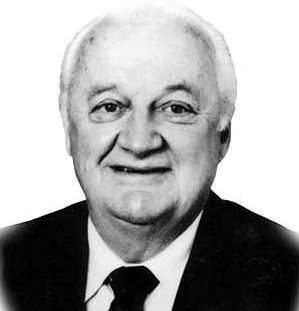 John Calverley “Jake” Milford, one of the finest hockey minds of his era and a native of Charlottetown, is to be inducted into the P.E.I Sports Hall of Fame when it holds its annual inductions on Saturday, September 20, at the Silver Fox Curling and Yacht Club in Summerside.

Born in Charlottetown in July 1914,“Jake” moved out west as a young man but he never forgot his Island roots and was a regular visitor to his home province throughout his lifetime.

Jake was a fine junior player in Manitoba, and amazing as it seems today, he spurned offers from the Red Wings and New York Rangers, electing instead to play in England with the Wembley team who offered far greater financial incentives than could be made in the National Hockey League.

After serving with distinction in the war, mostly in a Halifax heavy bomber, Jake came back to Canada and played in the American Hockey League, where he became a unique note in the history books, and for trivia buffs,  when he was traded by the Springfield Indians to the Buffalo Bisons for two sets of goal nets. To add salt to injury, the nets were used.

That indignation though does not do Jake justice, for his time as a junior and in the minors sharpened his mind to the business side of the sport, and on his retirement as a player he became a coach and manager, working in the New York Rangers’ system for many years, grooming future stars and winning four Central Hockey League Championships.  The C.H.L to this day honours its Coach of the Year with the Jake Milford trophy.

In 1973 Jake took on the general manager’s duties of the N.H.L’s Los Angeles Kings. Under his guidance the team played its best hockey to date, setting a franchise record in 1974-75 with 105 points. Following the 1976-77 season he moved to Vancouver to take on the GM duties with the Canucks, and his work there culminated with the franchise’s first ever appearance in the Stanley Cup final in 1982. Today, the Vancouver Canucks alumni still recognize Jake by naming their annual charity golf fundraiser after him.

Always known as a fine judge of talent and a shrewd trader, Jake trained many fine players, coaches and general managers, and was respected by all who came into contact with him.

He was inducted into the Hockey Hall of Fame in 1984, alongside Toronto Maple Leafs coach George “Punch” Imlach, and passed away that same year after a battle with pancreatic cancer.