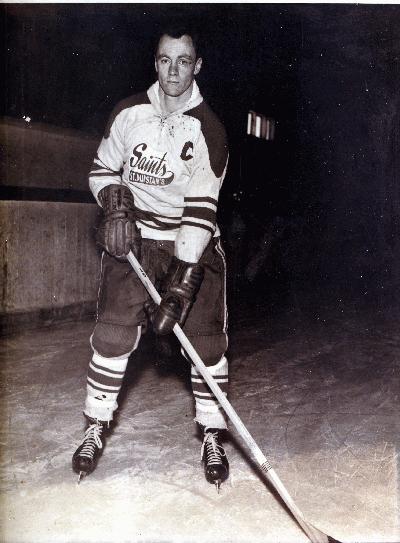 This is indeed a special honour to be standing here tonight inducting my dad, Vince Mulligan, into the PEI Sports Hall of Fame. I know there are many people here tonight supporting my dad, and an equally large number who wish they could have been here….it is a special evening, and one that dad has been looking forward to as soon as he got the news that he was to be inducted…..

I guess it is true that everybody does know Vince Mulligan, and most people I am sure have an opinion about him…the one big question tonight was whether he would be allowed to bring his dog Nutmeg, and I think most of you are probably expecting him to come through the door at any minute….indeed, he might, but she is here in spirit anyway as I know she wouldn’t want to miss it….

Although some here tonight may only know Vince as a bit eccentric, walking Nutmeg and more often than not talking in riddles, it is worth remembering he was himself a very fine athlete. Contemporaries of Vince on the ice or on the ball field know how good he was.

He certainly wasn’t the tallest or the most well built, but he was strong, and he was tough. He was a standout performer in hockey from his earliest years at Queen Square School and throughout his University years at St Dunstan’s, where he was a stalwart and a dependable defenceman, remarkable for someone his size, never more than 160 lbs. He was often compared to the talented Bert Steele, who had speed, but could hit with the best of them.

He was a star performer at every level he played – major, junior, senior and intercollegiate. He was a great junior player, with the Abbies and more notably with the Moncton Junior Beavers in 1960-61, where he helped that team challenge for a Memorial Cup, losing in the eastern Canadians to St Michael’s College. Team-mates remember Vince as a good honest player, talented both offensively and defensively, with a great skill of shutting down the opposition’s best players.

If his junior years were good, my dad’s college years were even better. He was made for University hockey, and no-one wore the St Dunstan’s red and white jersey with more pride than Vince Mulligan.

In his five years at St Dunstan’s, Vince was an all-star on four occasions, and was captain for three of those years. He led the team to a championship and a national silver medal in 1964-65 on a team which included the likes of Mike Kelly, Gord Whitlock and Billy MacMillan, and in his final year he was the top-scoring defenceman in the League. He was honoured with the Father MacGuigan Memorial Trophy for Most Outstanding Athlete, and he was given that rarest of honours when the university retired his number 8 jersey.

On his departure from the university hockey scene, it was written in the press that “Vince Mulligan has done more for hockey at S.D.U than anyone else. His leadership is visible on the ice, but it extends much farther than that. He is the leader in all matters concerning the players. Take a good look the last time number 8 plays, because this kind of player does not pass S.D.U everyday.”

Coach Jack Kane Jnr also commented that Vince “was the unsung hero of the last four years. His contribution is to be equated with hard work, and this alone makes him one of the outstanding athletes at St. Dunstan’s.”

A natural athlete in other sports too, notably as a defensive halfback in football, Vince also turned to coaching at a young age. One of my dad’s favourite photos is a young 21-year old Vince sitting proudly in front of the St Dunstan’s High School team whom he twice-led to an Island championship in the early 1960s.

However, it was my dad’s time at UPEI as a coach, and builder of programs, where he really made a name for himself. It is doubtful a more colourful and highly-regarded figure has ever graced the athletics department at the university, where in addition to coaching, he served as intramural director, director of recruiting, and intercollegiate coordinator.

He was the first to really recognize the popularity and potential of soccer, and he started the men’s soccer program in 1969, coaching the team through to 1982, including its first game in the AUAA in 19
77. What Vince actually knew about soccer in those early days is anybody’s guess – I am sure if you were to ask those players, they would be wondering the same thing, but he had the vision and foresight to take on this sport, and before long the Panthers, under his guidance, had a team that was going places. In 1981 the Panthers reached the AUAA finals, and in 1982 he took them to a 5th place-ranking in the country. For his efforts he was named AUAA Coach of the Year in 1982.

The following year he switched his cleats for skates, taking over as bench boss of the Hockey Panthers, and if his success in soccer was impressive, what he achieved on the ice was nothing short of remarkable.

In five years from 1983-1988, Vince won three AUAA championships, another AUAA Coach of the Year award, and a coaching record of 115 wins matched against 27 losses.  In 1988 the team was ranked number 1 in the country but unfortunately, as it had done twice previously, it couldn’t bring home the big one, a national championship.

How Vince consistently produced a winning team in one the country’s smallest universities is a topic frequently discussed by those who played under him. He was an outstanding recruiter who knew exactly the type of player he wanted, both in terms of talent, and personality. He knew how to build a team, not a series of individuals, and his motivational techniques, and profound sayings – while a mystery to probably even himself – touched a chord with all his players. His captain on the ice during those winning years, Doug Currie, remarked that “the players would go through the wall for Vince – they wanted to win so badly, not so much for themselves, but for him. He was totally unique – nobody had ever seen a coach like him….”

What also makes Vince Mulligan so unique is that he was prepared to try his hand at anything, so long as it would benefit the university, and its athletes.

Basketball – no problem, he coached the women’s team on his arrival at UPEI in 1969. He got women’s hockey rolling in 1978, and in 1990 he got the women’s soccer team up-and-running, reaching the play-offs three times in its first four years.

“Coaching is coaching” he would say “it doesn’t matter what sport it is, you need to relate to your players, and have a feel for your team.”

After 29 years of coaching and building at the university, dad called it a day. His retirement party is still talked about by all who were there, and I remember it well. The stories, the memories, the victories and the defeats, the moments shared and the battles fought were all relived that night. I am sure there are many of you here tonight, who were there then, and you have your own memories of that special night. I know dad does.

Of course someone of my dad’s profile doesn’t hide behind the curtains and shut the door, and he is still as vibrant, active and as opinionated as ever. His sense of community is a strong as it ever has been, and he takes a keen interest in all manners of local significance, particularly if it is related to sport. He has always followed and supported youth, or anything that he considers a worthwhile venture.

Through the years he has contributed greatly to minor hockey, but one of his most enjoyable experiences was coaching a group of women probably nearer his own age, when he became a coach and supporter of the Hockey Mommas of Charlottetown, a dedicated group of ladies who formed themselves into a team to promote cancer survival and healthy living. Who better than Vince to give them that extra push?

Charismatic, unique, a one-off, an individual – generous, caring, sincere…..all the attributes that go into making a Hall of Famer, not just in sport, but in life.

Vince Mulligan has all of those qualities, and more.

I am very proud this evening to say to my dad, Vince Mulligan – welcome to the Hall of Fame.