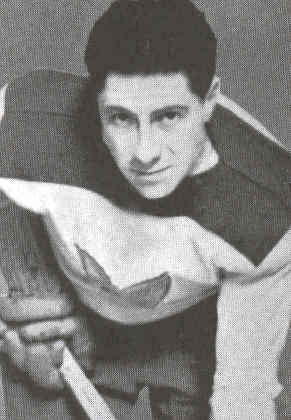 John Ivan “Hickey” Nicholson was born on September 9, 1912 in Charlottetown, P.E.I. He learned the basics of hockey while a student at West Kent School before beginning his career with the Intermediate Victorias of the Island Hockey League in the 1920s. In the 1930s, he moved on to the Charlottetown Abbies, playing on a line with the late Walter Lawlor [inducted 1978] and John Squarebriggs [inducted 2005]. “Hickey” was the darling of the Abbies much like the late George “Chick” Gallant [inducted 1981] was for Summerside Crystals.  He was the drawing card for the Abby and Crystal games before the formation of the Original Big Four Hockey League.  When that league was formed, he was one of only a handful of Maritimers to make the grade, as 95% of the players were imports.  “Hickey” was then a linemate of the late Jackie Kane and Pete Kelly, two of the most famous imports to play with the Abbies.

In the season of 1936-37, “Hickey” Nicholson displayed his talents in England where he was with the Harringay Racers in the London area. The next season saw him turn professional with the Kansas City Greyhounds of the American Hockey Association. An article written in the Kansas City paper said of Nicholson, “For a beginner, he has greater polish that any first year man in the American Hockey Association.  He takes a regular turn on the ice, is an excellent back-checker, a good smart stick-handler who can make plays.  “Hickey” possesses all the attributes of greatness in a hockey player. The Referees Association voted “Hickey” the best major league prospect.”  Before the 1937-38 season concluded, he was called up by the Chicago Black Hawks of the National Hockey League. He scored a goal in his very first game with the Hawks against the Boston Bruins on February 5th, 1938, making him the first native Prince Edward Islander to score a goal in the N.H.L.  He was back with the Kansas City Club in 1938-39 because the price tag put on him by Kansas City was too high.  He had the ability but Chicago didn’t have the money – a situation rarely encountered in today’s N.H.L.  He scored 16 goals and added 35 assists for a season’s total of 51 points. In 1939-40, his points totalled 28, comprising 14 goal and the same number of assists.

“Hickey” Nicholson quit professional hockey in 1940 to join the Canadian Army, where rose to the rank of Major.  While serving in the European Conflict, he was awarded the Military Cross for Bravery.  His last hockey performances were with the Canadian Army Team of the Halifax City league.

John Ivan “Hickey” Nicholson passed away in Charlottetown on November 22nd, 1956.  Truly worthy of recognition, he was posthumously inducted into the Prince Edward Island Sports Hall of Fame.