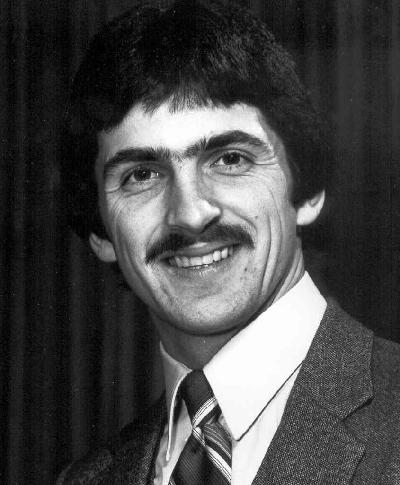 Kevin O’Brien’s competitive spirit and principle of doing his absolute best in any given moment shaped a short but very successful career in competitive speed skating. As a child, Kevin had to wear corrective leg braces for two years which were then removed when he attended his first year of school. With the braces removed, Kevin began skating that winter and with his father’s encouragement, competed in many sports while concentrating on hockey. Kevin’s speed on skates impressed many and with this he became introduced to speed skating in 1973 through Pete Milburn and entered in his first competition when he was eleven. Using borrowed skates from Nancy White, he came second in a Maritime level competition at the Charlottetown Forum. Kevin skated for two more years and then concentrated on other competitive sports.

The attraction to the sport of speed skating continued for Kevin while watching on television the 1976 Olympics in Innsbruck. Leaving him spellbound and the desire to try skating again, he then attended an open camp for the sport that was held on the UPEI campus in September of 1978 to identify potential skaters for the Canada Games in 1979. While training with his brother Louis, a natural to the sport as well, Kevin trained during the Fall and traveled to Lake Placid where extensive and exhaustive training continued under the direction of his coach Al Workman. With his natural ability, Kevin skated the required 500 metre time on his first time trial in Lake Placid. Upon selection to represent PEI at the Canada Games in Brandon in 1979 . Kevin established a national ranking of 19th. With this authentic experience of competition, he consistently recorded personal best times in events that he entered.

In six months of skating, Kevin accomplished what takes most athletes several years . He was now ranked within the top fifteen junior sprinters in Canada and would only get better.

Kevin’s second season saw him improve his Junior ranking to 12th and he moved in to the top twenty in the Senior rankings. With this season primarily spent on training principles, Kevin and a group of skaters attended an open competition in Lake Placid. In this his very first mass start international competition , Kevin was competing against former Olympians and skaters from both the US and Canadian national training squads. With his pure skating strategy , he was able to win the overall championship while skating the required distances of 300, 500, 800, 1500, 3000 and 5000 metres. Kevin became known as one of the strongest speed skaters in the world with his incredible leg strength.

Kevin’s career continued over the next two seasons with many personal highlights :
– he won a total of 11 international competitions in his four seasons of skating
– he was the first Senior ’A’ skater to win back to back North American Championships
– Kevin was victorious in winning Canada’s and the United States oldest races in the same year (Sault St.Marie’s ‘Bon Soo’ and Detroit’s ’Race of Champions’)
– he made the National Junior team and was offered a National Senior team position in the same year
– Kevin consistently beat skaters with much higher national or world rankings
– he set a North American record in the 5000 metres that still currently stands after 23 years
– coming within nine hundredths of an Olympic standard within four years of beginning the sport

It was unfortunate that later circumstances did not allow Kevin a chance to compete at an Olympic Games, and he retired after the 1982 season. when a berth at the 1984 Sarajevo Olympic Games was in his grasp. However, his performances in his short career speak volumes, and there is no doubt that during that time he was up there with the very best.