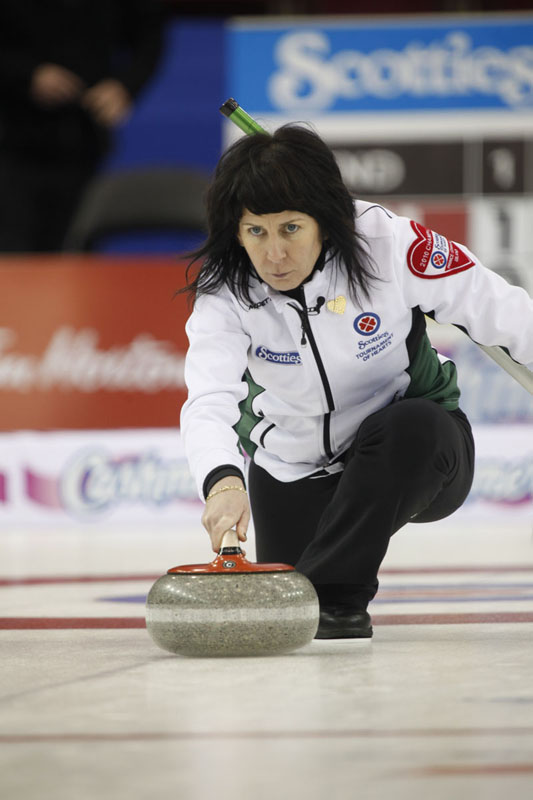 Kathy O’Rourke skipped one of PEI’s greatest curling teams to the Gold Medal game of the 2010 Scotties Tournament of Hearts in Sault St Marie Ontario. Ultimately, they would have settle with a silver medal after losing a close game to Manitoba’s Jennifer Jones.

The Al Ledgerwood coached Island rink, consisted of Tricia Affleck at lead, O’Rourke throwing second stones and skipping, Geri Lynn Ramsay at third and Erin Carmody throwing the final stones. Shelley Bradley was the teams alternate for the championship. It was only the second time an Island rink had finished as the runner-up in the Tournament of Hearts.

O’Rourke grew up in Summerside and upon entering Intermediate School showed, very early, significant athletic ability. After being introduced to basketball in grade seven Kathy quickly established herself as one of the best players in her age class. She won a PEISAA Championship in both grade 8 and 9 and was named MVP in that grade 9 Tournament. She would go on to Three Oaks and again win a championship in Grade 12 along with another MVP award.  That grade 12 year would also provide further evidence of Kathy’s all around athletic ability as she scored the game winning goal to lead her team to the PEISAA field hockey championship and skipped the school team to the High School Curling Championship as well. She would go on the play basketball at Acadia University for a year before moving to UPEI and completing her business degree.

This is the first time curling appears in her resume, but she grew up in a famous curling family and the game was never far from her mind. She played throughout her Intermediate and High School years and after University started to play seriously at the Charlottetown curling Club.

In the late 1980,s Kathy’s hard work lead to opportunities to play at an elite level and in 1989 it all came together. She won her first PEI Women’s Championship playing second stone on a rink skipped by Kathie Gallant. The Island foursome finished 4-7 at the Scott Tournament of Hearts in Kelowna, BC.

In 1991, Kathy played second stone on the Angela Roberts team that represented the Island at the Scotties in Saskatoon. The team finished 2-9 in  the Saskatchewan based event.

She moved up to throw third stones for skip Susan McInnis in 1996, the Island champs finished in a five way tie for fourth place in Thunder Bay, Ontario. The PEI rink went to a tie breaker and lost a tough 6-5 match to Connie Laliberte’s Team Canada rink.

Kathy was second stone on Rebecca Jean MacPhee’s 1999 rink that was the host team for the Scotties held at the Charlottetown Civic Centre. The Island foursome had a good week, starting with a 10-3 defeat of Quebec followed by close victories over Team Canada, Ontario, Alberta, BC and New Brunswick. PEI tied Newfoundland and Labrador for fifth place, just missing the playoffs. One of the highlights of that week was a packed Civic Centre anxious to see the Island rink face arch rival Colleen Jones and her Nova Scotia rink. The Jones foursome won the game 6-5 and went on to take the National title with a win over Team Canada.

Kathy skipped her own rink to the 2002 PEI title and advanced to the Scott Tournament of Hearts in Brandon Manitoba. The Island foursome recorded a 3-8 record.

Then came the 2010 Scotties, where her team became the talk of the Island by making a big splash on the National curling front.

The O’Rourke foursome won Provincial Scotties in early January at the Montague Curling Club going 6-1 and defeating Montague’s Tammy Dewar rink 8-6. Earlier, O’Rourke had lost 4-1 to Dewar for her only loss after four straight wins. The final match was a tight one, O’Rourke stole two in the tenth to win the title and the Island team advanced to the nationals in Sault St Marie. It should be noted that the PEI champs were listed as the Erin Carmody rink in the Provincials but would become the O’Rourke rink for the Scotties.

What a week it would turn out to be for the relatively inexperienced Island Rink.

PEI would post an 8-3 record that began with five wins in their first six contests, losing only to Alberta. PEI would reel off three more victories before falling to Ontario but then rebounded to defeat Quebec and defending champion Team Canada’s Jennifer Jones 9-5. This set the stage for a rematch in the Page Playoffs and in fact two more games with Jones before it was over.

PEI split its last two games with a win over Newfoundland and Labrador and a loss to British Columbia in their final round robin game.

PEI and Team Canada finished on top with identical 8-3 records with the Island rink securing first place because of their round robin win over Jones.

In the 1 vs 2 Page Playoff match, Jones avenged the earlier 9-5 loss to PEI with an 8-5 victory that advanced them to the Scotties final.

PEI defeated the Krista McCarville rink 10-6 in the semifinal and they were off to play Team Canada in the final. It was without any doubt the biggest match in years for Island curling fans, and as hoped, it turned out to be a thriller.

Jones led 1-0 and 3-2 early but he Island rink rebounded with two in the fifth and a steal of two in the sixth to take, what Islanders hoped, was an insurmountable 6-3 lead. However, the Jones foursome came back to take a 7-6 lead into the tenth end. Much to her PEI fans delight O’Rourke was able to tie the game in the tenth and pushed the game to an extra end. Unfortunately, in the extra, Jones prevailed to score an 8-7 victory.

After the game Kathy was quoted.

“ We’d like to have made history and finish it off, but we gave it our best and it just turned out to be a couple of inches short”

It was a bittersweet ending for team PEI, coming so close to winning   PEI a major curling championship. After a magical week in the “Soo”, the Island rink returned home to a huge reception at the Charlottetown Curling Club.

Kathy also played on the 1989 PEI rink that won the Canadian Mixed Curling Championship in Brandon Manitoba. The rink was skipped by Robert Campbell and also included her husband Mark O’Rourke and Angela Roberts. The PEI foursome went 9-2 for the week and defeated Jeff Stoughton’s Manitoba rink 6-5 in the final

In 1999, Kathy played third on her brother Peter’s rink along with her husband Mark O’Rourke and sister in law Karen A MacDonald. After winning the Island they went on to the Nationals and suffered a heart breaking loss in the final, settling for the silver medal.

She also joined her brother Rod, husband Mark and the other sister in law named Karen MacDonald to win another Island mixed title in 2013. Kathy has also played on nine provincial runners up rinks between 1993 and 2015

In 2010 Kathy was named Curl PEI’s Senior Female Athlete of the Year and her team was awarded the Sport PEI Team of the Year for 2010.

In October of 2017, Kathy was inducted into the PEI Curling Hall of fame

In her real life, Kathy is a Managing Partner for the Charlottetown investment firm Grant Thornton, has served as the chairperson for the Holland College Board of Directors and has been on the Board of Directors for Natural Products Canada as well as CAA Atlantic. 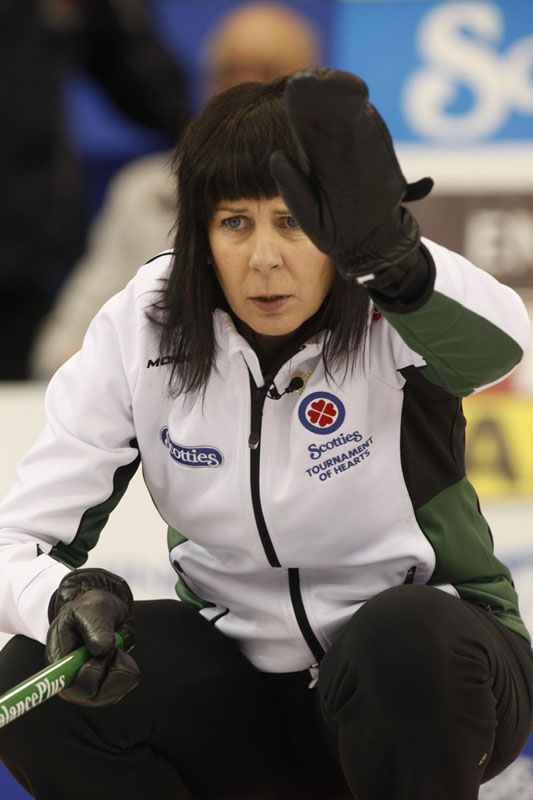