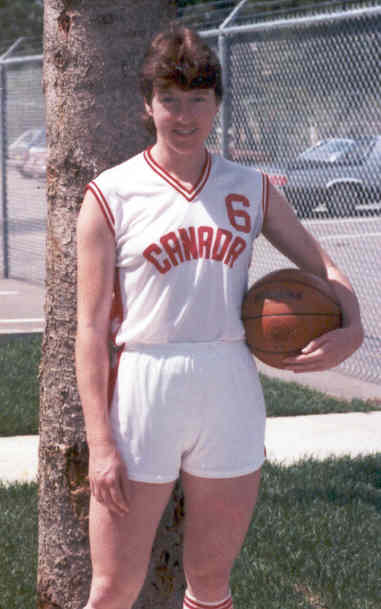 The pride of Kensington, Anna Pendergast-Stammberger first picked up a basketball at a University of Prince Edward Island basketball camp in 1972 when she was eleven years old and fell in love with the game.

While growing up in Kensington and attending school, Anna was very athletic and was well-known for her performance in all sports including cross country running , volleyball and basketball. While attending Kensington High School, a vivid memory for Anna was her first basketball game while in Grade Nine in 1975 against Summerside High School.

With her athleticism, Anna was originally recruited for her volleyball abilities by four Maritime universities. With her desire to study Physical Education, Anna committed to Dalhousie University in Nova Scotia in 1978.

At Dalhousie, Anna initially began with the volleyball team but then decided to try out for the women’s basketball team. As a freshman, Anna was successfully selected for the varsity basketball team by showcasing her physical attributes and work ethic. While not playing much in that first year, Anna would tell family members to come early to her games to see her in the warm-up as she probably would not see too much game time.

Into her second year at Dalhousie, Anna’s development increased and her love of the game of basketball became more apparent. She played a major role with the team that year and Dalhousie came very close to capturing the CIAU championship and at this event, Anna was selected as a tournament All-Star.  Anna’s performance brought the public address announcer to say ” a star is born ” when she received her award.

In the summer of 1980, Anna was identified to attend the National Women’s Basketball Identification Camp. Although not selected for the National Team that summer, Anna was asked to remain with the camp to further her development as a reward for the strong desire she demonstrated for the game along with her competitive spirit and passion to excel.

In 1982, upon completing her stellar performances at Dalhousie, Anna then began her tenure with the Canadian National Women’s Basketball Team.  As a rookie, Anna initially was told by the coach that she was going to be a practice player at her first international tournament that the team attended in Taiwan. This tournament, the Jones Cup, was very special to Anna as the Canadian team ended up playing against the strong United States team in the gold medal game. Anna, upon being challenged by the coach to be a better, stronger and faster basketball player, was the first substitute in that gold medal game which saw the Canadian team defeat the United States.

Continuing with the National Women’s Basketball team, Anna attended numerous international tournaments and represented Canada in over twenty-five different countries across the globe.

Two of her coveted accomplishments include:

In 1984, Anna became the first female athlete from Prince Edward Island to participate in an Olympic Games. With the Canadian team , Anna attended the Summer Olympic Games in Los Angeles where she played in every game and the team settled to a fourth place finish, losing to China by five points in the bronze medal game . The aspect of associating and being in the same sporting and competitive environment of famous world class athletes was a thrill to Anna and
fuelled her ambition to compete .

In 1986, Anna competed at the World Championships in Moscow with all the powerhouse teams in attendance. The Canadian Women’s Basketball Team had an excellent tournament and lost to the Soviet Union by only one point in the semi-finals and then went on to capture the bronze medal. It should be noted that at this tournament, Canada, when they played the powerful United States team, were the closest in scoring by an opponent, losing by 20 points.

While competing with the Canadian National Basketball team in the summer months, Anna resided in Germany during the winter months and played in their national league beginning in 1985. While playing elite competition, she continued and maintained her athletic and basketball skills.

Anna played her final basketball games representing Canada in Spain at a pre-Olympic qualification tournament in 1992. Although she was injured in Brazil she did not give up her Olympic dream. Spanning an eleven year national career, Anna was also Team Captain for her final three years.

With this, Anna continued to play and coach elite basketball in Germany, before returning to Prince Edward Island in the new millennium with her husband, whom she met in Germany, and their two children. A teacher by profession, she has been she is a popular speaker at functions where she uses her experiences to motivate young athletes. Her message, which never fails to inspire, is one of never giving up even when the odds are stacked against you, and of always following your dreams.

After several years of inspiring the next generation of Island athletes as a teacher and athletics director at Kensington Intermediate-Senior High School, Anna will once again be leaving her hometown for Dalhousie University. In the fall of 2009, she will take up the position of head coach with women’s basketball team of her alma mater. Both Anna and the Dalhousie athletics department are looking forward to seeing Anna apply her talents and lead the Tigers to greatness once more.