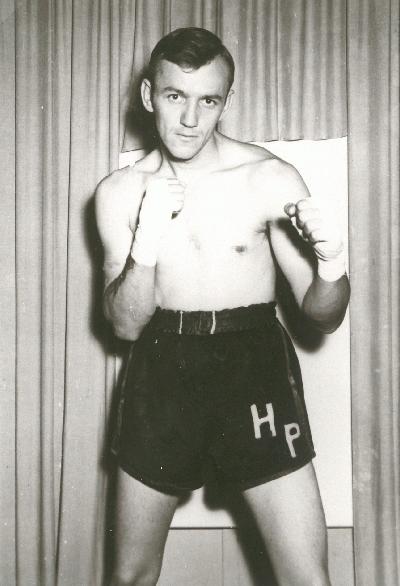 “To beat him they had to be exceptionally good, to fight him to a draw was tops, to lose to him was not considered a disgrace.”  This is how Harry “Kid” Poulton – Charlottetown’s “Wizard of the Ring” – was introduced upon his induction into the PEI Sports Hall of Fame.

Born on August 10th, 1925, Harry was afflicted with polio at a young age, and left with a withered right foot.  During his boxing career from 1943 to 1955, he overcame this physical disability to trade punches with the best.  His unfailing courage and determination more than compensated for this disadvantage as he battled to capture the Maritime Welterweight Boxing Championship in the early 1950s.  Later, he had two shots at the 160 lb Canadian Middleweight Title, losing by close decision on both occasions.

Harry “Kid” Poulton was trained by one of the craftiest handlers of professional boxers in Eastern Canada, Tom McCluskey, a native of Prince Edward Island living in Dartmouth, Nova Scotia.  After moving into the middleweight ranks, he first went after the Canadian Championship in Stellarton, Nova Scotia on June 19, 1953.  Yvon Durelle, the Baie St. Anne Battler who later came within a whisker of winning the World Light Heavyweight Championship against Archie Moore, took a 12 round decision from Harry on that night.  On June 29, 1954 in St. John, New Brunswick Harry lost a 12 round decision to Charlie Chase, who in 1952 was a member of the Canadian All-Star Olympic Team.

Undoubtedly, two of the biggest highlights of Harry’s boxing career came in February, 1953.  On February 6th, he battled to a 10-round draw with Lou Lawrence of Vancouver, British Columbia in Calgary, Alberta.  In a return bout 19 days later in Calgary, Lawrence won by an unpopular decision.

Harry Poulton fought most of the good ones – “Kid” Howard, Blair Haydon, Roger Whynott, to name a few – and faced seven Canadian Champions and five Maritime title holders.  By the time he decided that his opponents had had enough and that it was time for him to retire, he had engaged in a total of 127 professional bouts and was stopped on only three occasions.

He fought them all, lost few, won many, and held his own with the best of them.  Harry “Kid” Poulton was an exceptional athlete indeed, an inspiration to his fellow boxers and to those who followed one of the cleverest fighters ever to perform in this province.  In later years, he developed an interest in harness racing, becoming a driver and trainer of horses.

Kid’s (incomplete) fight record can be found at http://www.boxrec.com/boxer_display.php?boxer_id=44283