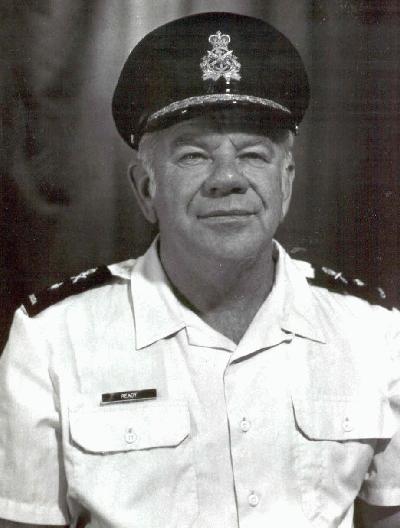 “Some individuals are destined to wear the Captain’s ”C” in every chapter of their life, and Jack ”Spy” Ready surely belongs to this select company. Big, brash, a true friend of all, his life story is a litany of service to his community and to the world of amateur sport. From his very earliest appearance on Island sandlots and hockey rinks, to his being summoned by helicopter to the Pentagon in Washington, D.C., for a briefing of generals at the time of the Gulf War, Jack ”Spy” Ready’s exploits remain the stuff of legend.

Born January 6, 1930 in Charlottetown, the eldest son of John E. Ready and Marion Jane Small, John Edward Ready embodied the attributes of the natural athlete, for not only was he bigger than most of his Queen Square schoolmates, he possessed exceptional physical coordination and swiftness as well. More importantly, Big Jack Ready had the savvy and flair for showmanship that would make him a star in five different sports.

A blazing southpaw in Senior Baseball at 15, and a powerhouse in Senior Hockey at age 17, ”Spy” ( the nickname derives from a particularly menacing slouch hat that he wore as a grocery delivery boy) would also leave competitive sport at a relatively early age, retiring from baseball at age 27, and from hockey at age 28. In those dozen years, he would have few equals in hockey, baseball, rugby, softball or basketball. A brief but successful boxing career suggests yet again how everything came easy to the husky Charlottetowner.

A colourful, rushing defenseman, Jack had the size, speed and stamina to carry several teams to provincial and regional championships, including the 1946 Charlottetown Kinsmen Juveniles, the 1947 Prince of Wales College Squad, and (that same year) the Halifax Saint Mary’s Juniors, Eastern Canadian Memorial Cup finalists. St. Mary’s coach coach Marty Barry boldly stated in the press that Ready was the best NHL prospect in the Maritimes.

At age 21, Big Jack would be offered a tryout and stick with the Charlottetown Islanders of the Maritime Major Hockey League, a professional loop rated above the present day American Hockey League, one of only four Island born players to break into Leo Lamoureux’s line-up. Declining offers from such illustrious NHL bosses as Tommy Gorman, and turning down a multi-sport scholarship from the University of Denver, Ready would conclude his hockey career in 1958 with the Charlottetown Royals, moving from defense up to left wing alongside Angie Carroll and ”Buck” Whitlock, all-time scoring king of Maritime senior hockey. Had Ready moved up to the forward line earlier in his career, Whitlock observed, his NHL career would have been assured.

Signing a try-out form in 1947 with Brooklyn Dodgers’ scout Bill O’Conner, ”Spy” Ready was one of the most talented ballplayers in the Maritimes, a left-handed pitcher with the kind of velocity that batters feared, a hitter who could tag the ball well over 400 feet, and a fielding showboat at first base who delighted in rousing opponents and spectators to choruses of mocking boos. Again, at only the age of 21, Big Jack would take up double duties of playing coach with the Abbies senior ballteam.

Playing in the key flying-quarter position with the powerful Charlottetown Abbies and Nomads’ rugby football teams, it was common knowledge that it would take three men to bring ”Spy” down, and even then he had to stumble. The broad-shouldered, 200 pound captain would lead the 1955 Nomads to the historic McCurdy Cup, emblematic of Maritime Senior rugby supremacy, with a 3-0 victory over Fred Kelly’s Acadia Axeman.

In softball, where Ready had the distinction of performing with the 1960 BYC squad, the first Island team to win a Maritime title, his ability to entertain as well as win would be the buzz around town. In his modest way, Jack let it be known before one contest that he would strike out twelve Vic batters in his next seven-inning stint, and of course this and other Ali-like predictions would invariably prove to come true.

A talented basketball player with the PWC Welshmen and other vintage teams, Jack ”Spy” Ready’s matchless stamina is best revealed in the run of one fall day in 1948, when he dashed from an afternoon football game against St. Dunstan’s to play in a basketball contest over at the college gym. Following that game, he headed to the Charlottetown forum to play hockey, patrolling the blue line for another hard fought forty minutes, having played three different sports in under nine hours, one of the most remarkable feats of athletic endurance ever witnessed in the province.

P.E.I.’s number one hockey referee for a short time, Jack would also serve as the Maritime scout for the Toronto Maple Leafs from 1957 through 1975, and the New Jersey Devil’s for a further two years (Alan MacAdam, Rick Vaive, Errol Thompson, Hilliard Graves, Bobby Stewart, M.F. Schurman, and Bobby MacMillan are some of the Island discoveries ”Spy” Ready would introduce to the NHL rosters.) A charter member of MAHPER in 1949, he would also be appointed in 1962 to the 29-member National Sports Advisory Council on Fitness and Amateur Sport, whose other sporting luminaries included Howie Meeker and Maurice ”The Rocket” Richard . A past commissioner of both Island hockey and Baseball, Jack was a long time executive director of the Basilica Rec Center. His lengthy career at Charlottetown City Hall Began in 1968, and the popular politician from Nassau Street would serve eight terms as alderman, crowned by two teams as Mayor (in this latter role, Mayor Ready acted as Chairman of the Board for the Island’s successful hosting of the 1991 Canada Winter Games, whose legacy includes the Charlottetown Civic Centre.)

Central to his distinguished public service is Jack Ready’s ongoing military career. Joining the P.E.I. Regiment as an officer cadet in 1952, and graduating the same year from Officer Candidate School, his capacity for leadership would eventually see him appointed Commander, P.E.I. Militia district, with the rank of Colonel, in 1972; and Commander of the Atlantic Militia District, with the rank of Brigadier-General, in 1977. Married to former Anne MacCormack, R.N., of Souris, their five children are John, Michael, Mary-Jane, Anne, and Peter, all of whom have represented P.E.I. at Canada Games and intercollegiate competition. His boundless energy
for life and his tireless dedication to the well-being of his fellow Islanders establish Brigadier-General Jack ”Spy” Ready as a most worthy inductee to the Prince Edward Island Sports Hall of Fame.”