View All Inductees
Wallace Scantlebury - All-Round Athlete
Inducted on May 29, 1983 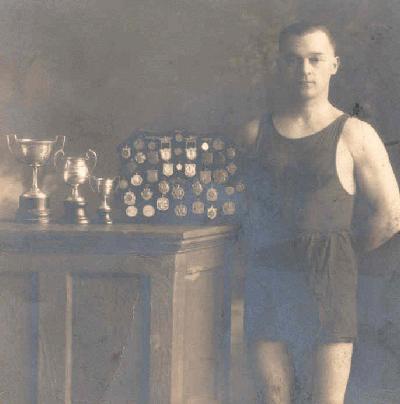 Few athletes can boast the annual distinction of starring in over a dozen sports, and yet that is Wallace Scantlebury’s amazing legacy.  A measure of the respect and affection he inspired in his community is demonstrated by the 1960s poll conducted by the Charlottetown Guardian-Patriot in which Wallie Scantlebury was named as the all-round athlete of the 1920s.

Born December 9, 1895 in Charlottetown, Wallace Everett “Wallie” Scantlebury was that rare commodity – the natural athlete.  He was also a man who could convey his love of amateur sport to others, young and old alike.  And this he would do for over half a century until his untimely death in 1968.

Cycling was among the first athletic activities undertaken by Wallie.  He competed both independently and with the famed Abegweit clubs of Charlottetown after the First World War, winning several first place medals in Maritime competition.

Wallie was even more successful in pole vaulting, representing the Island in this event throughout the Maritimes during the 1920s.  The record also shows that Scantlebury was first in the pole vault at the Caledonia Games held in 1919 at Boston, where his mark was 10 feet 2 inches.  He was Maritime champion pole vaulter in both 1925 and 1926, and placed third in the Canadian championship of 1925.  When his days of active pole vaulting were over, Wallie remained with the Abbies track and field team as their trainer throughout the 1930s and 40s.

Basketball found Wallie as both forward and guard with the YMCA team of the Charlottetown City League after the war, and with several other teams in the Inter-Church League of the 1920s.  He remained with basketball as coach to the Queen Square School teams of the 1940s and 50s.  As well, he organized a juvenile basketball league, and served as president to the Island Basketball League for many years.  In 1962, he was named Honorary President of the Charlottetown Basketball League.

Wallie Scantlebury also performed with a number of hockey teams, acting as defenseman and as rover in the older seven-man version of the game.  Among the teams he played for were the Charlottetown YMCA squad and the Bruins of the 1920s City League.  He would be part of 1919-20 Abegweits Intermediate team, which captured that season’s Maritime title.  As in his other sports, when his hockey playing days were complete, Wallie involved himself tirelessly as an administrator, serving on the executive of the Charlottetown Islanders hockey clubs of the 1950s.

As a wrestler in the Greco-Roman or “no holds barred” style, Wallie fought and usually defeated all comers throughout the Maritimes and New England; these wrestlers were often associated with travelling circuses.  Boxing interested Wallie as well, and although he never donned the gloves himself, he served at countless Island boxing matches as either referee or ringside official. Wallie’s refereeing talents were also greatly in demand for other sporting events such as hockey, basketball and rugby.

The proof of Wallie’s versatility by no means ends here. He became known as baseball’s “Jack-in-the-box” while performing as his club’s shortstop.  Among his many medals are those representing victories in motorcycle racing, a sport in which he competed on a Harley-Davidson.  And as a volunteer firefighter for thirty-six years, Wallie excelled in the hose-reel-and-ladder race, a popular Island spectacle before the advent of modern firefighting devices.

Perhaps one of Wallie’s greatest contributions to Island sport was his tireless effort in establishing figure skating as a premiere activity in this province.  He helped revive the sport, founding the Island’s first figure skating club in Charlottetown in 1940.  For almost twenty years, he taught thousands of young people the skills involved in this sport.  Wallie also directed and starred in his annual “Scantlebury’s Ice Follies,” taking his show throughout the Maritimes.

Typical of all his contributions to Island amateur sport, Wallie received no remuneration for his guidance.  His concern and love for young Islanders would best be displayed by his twenty years as the physical director at the Charlottetown YMCA.  From the 1920s through the 1940s, Wallie “ran the entire show” while also serving as gymnastics instructor and performer, the high bar being his specialty event.  He served as a YMCA camp director and leader as well, both in this country and in the United States. In addition to this, Wallie’s feats with the Indian clubs and as an acrobat were regularly performed at benefit shows across the Island.  Right up until the moment of his untimely death in 1968, Wallie Scantlebury was front and centre at every Island parade and exhibition, either in person or in spirit, represented by his trained majorettes.

Wallie Scantlebury was a true sportsman whose tireless and unselfish devotion to the ideals of amateur athletics, and to the well being of his fellow Islanders, made him a most worthy 1983 selection to the Prince Edward Island Sports Hall of Fame.