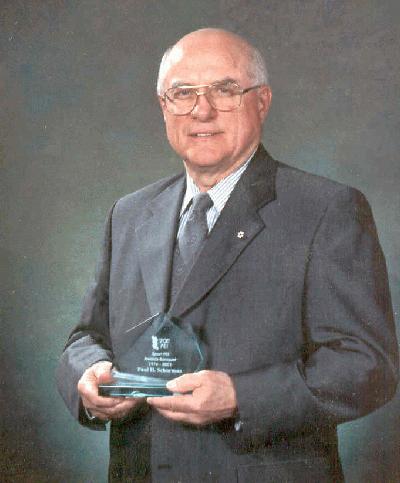 On centre ice, centre field, or centre stage, the spotlight of Island sport and civic life has focussed upon Paul H. Schurman for more than 70 years, and it has been a happy alliance.

Born May 6, 1933, in Summerside, Paul Hudson Schurman would inherit the Schurman family’s keen love of athletic endeavour, already evident in the election of brother Bob [inducted 1973] and Uncle Jack [inducted 1983] to the Prince Edward Island Sports Hall of Fame.

By his teenage years, Paul H. Schurman’s leadership and natural talent for hockey and baseball would be displayed regionally:

In baseball, whether as a catcher, pitcher, infielder or outfielder, Paul would excel. He would be a member of the 1950 Maritimes Junior Baseball Champion and Maritime Intermediate Baseball champions’ Summerside Curran & Briggs team, as well as the 1953 Maritime Junior Hockey Champion Sussex Rangers. The following season, Paul would be part of the Maritime Intermediate Hockey champs, the Summerside Aces. Through 1950-1961, Paul totalled two Provincial, and two Maritime Championship titles.

In hockey, although only 22, Paul would serve as playing-coach for the 1955-56 Sussex Legionaries, Maritime Intermediate champions. He also won Maritime titles in Summerside in 1953-54, and with Sussex in 1950-51.

In 2015, as a member of the Sussex Jnr Rangers, he was inducted into the Sussex Area Sports Wall of Fame.

In golf, Paul was a member of three Provincial Senior teams at National Championships in Dartmouth, Montreal and Victoria. He has three holes in one to his name.

Throughout his participation in competitive sport, the word “champion” and ” Paul H.” have become virtually synonymous, whether it is as the winner of the Atlantic Provinces Radio Celebrity Golf Tournament in St. Petersburg, Florida, in 1975; or as a member of Sandy’s Charlottetown Old-timers, 1978 Canada Cup Winners in C.O.H.A. action.

After “hanging up the blades,” Paul H. Schurman took over the mike from his late brother, Bob, and described hundreds of games in a variety of sports to listeners of radio station CJRW. While president and general manager at CJRW, Paul H. was instrumental in the success of a series of radio appeal programs. This talent for/>administration has been evident in the scores of chairmanships and committee posts which Paul has assumed: the 1973 Centennial Summer Games, Provincial Junior Golf, Sport PEI, Summerside Minor Hockey Association, Red Cross and Cancer Societies, the PEI United Fund and the Regional Cultural Events Centre committee, which would ultimately provide the Prince Edward Sports Hall of Fame with a much needed expansion of exhibit space.

Whether as the spellbinding master of ceremonies at a sports award night, or the
tireless worker behind the scenes, the name of Paul H. Schurman has invariably meant one thing above all else; grace under pressure. Paul was not only inducted in the PEI Sports Hall of Fame, but he was also inducted in the Broadcasting Hall of Fame. His other awards include the Order of Red Cross, the Order of PEI, an Honorary Degree from the University of Prince Edward Island, a PEI Senior Islander of the Year award, and probably the highlight, the Order of Canada. An impressive haul for a decent, hard-working man who is proud of his Summerside community. his Island home, and his efforts to make everything he is involved with better in every way. He is the champion volunteer.

In 2015 he became Chair of the PEI Sports Hall of Fame, where he oversaw a successful fundraising campaign, which raised over $100,000, securing the Hall’s future.

The biography on Paul H. Schurman from the Canadian Communications Foundation can be found at http://www.broadcasting-history.ca/index3.html