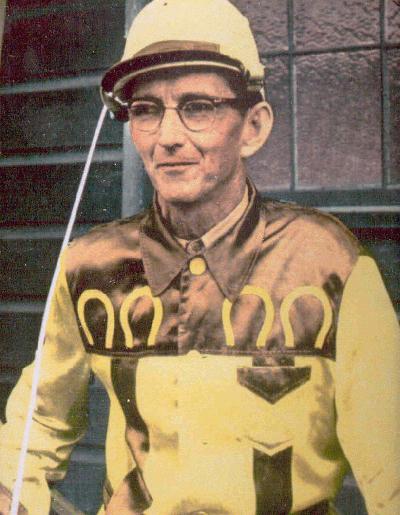 He was known as harness racing’s “sly old fox,” and could claim an amazing 2500 victories in the illustrious “Sport of Kings.”

Born February 6, 1909, in Travellers’ Rest, P.E.I., Earle Charles Semple was perhaps the youngest Islander ever to race harness horses, in those gritty days when neither a licence nor a driver’s suit were required.  At the age of nine, under the watchful eye of his famous father, Tyndall Semple, young Earle would be successful in winning three dashes at an Orange Tea celebration in Kensington, along with the $300 prize money.  His dad Tyndall, whose own career behind the sulky had begun at thirteen, remained active into his 85th year, driving at Charlottetown’s Old Home Week for sixty consecutive years.  Tyndall’s love of horses and competitive impulse would shape young Earle’s imagination.

By 1930, Earle Semple had established a serious career in harness-racing, appearing at such pioneer tracks as the Northam Oval built by fox-farmers Milligan and Morrison, St. Peter’s, Montague, Myron MacArthur’s Kensington track and Edgar Bryanton’s Indian River venue.  Purses were lean, but competition was hardy enough and the crowds appreciative.  A job handling George Brookins’ horses was followed by another, racing a stable out of Halifax.  And finally, in 1947, along with Alberton’s Joe O’Brien [inducted 1968], Semple made the big move to the United States, where the purses were several times greater.

Beginning in Maine, continuing on through New Hampshire, Massachusetts, Connecticut and New York, and doubling back into Quebec City and Ontario, Earle Semple’s career truly hit its stride at this international level.  His mark had already been firmly established on the Maritime circuit; he had broken the Maritime pacing record with a little mare called “Jerry’s Nightmare,” and held several individual track records.  The move to the “big time” – and the Yonkers, Roosevelt and Saratoga raceways were exactly that – necessitated that Semple devise a tractor and trailer to carry his horses on the American circuit.  He raced from May to November, with eight horses to a load, and a maximum 24 horses in his stable, returning each winter to PEI.  Semple was the only Islander to ship an Island horse directly to the “Big Time;” his little mare, “Mary Merk” would take twelve firsts in twenty races, with another six second-place finishes.

While in New York, Semple purchased the colt most associated with his own career, a quirky but lighting fast horse called “Dean Gallon.”  In 23 races, Dean Gallon picked up twenty victories.  Reluctantly, Semple sold the horse in 1954 for the then-hefty sum of $20,000.  Notably, this was the same year in which Andy Perry sold “Bay State Pat” for $22,000.  As fate would have it, “Dean Gallon” developed health problems while with its new owner, and Semple would ultimately buy the horse back for $1,000 out of affection for the animal.

The sale of Dean Gallon provided Semple and his family with some much needed security.  He was able to build a residence and barn in Kensington, from which to base his career.  It was in 1946 that Semple entered into his happy partnership with Brainard Steele of Bangor, Maine – a partnership that endured until the latter’s death in 1966.  Such was the affection that developed between the two horsemen that the Maine businessman bequeathed to the Island racer all his horses and equipment, his tractor and trailer, and a sum of $7,000.  At this time Semple made up his mind to return to P.E.I., content to train and drive his horses on a more modest scale.

The name of Earle Semple is not included in the 1000 Win Plateau of the U.S.T.A. Racing Guide, as that record book does not predate 1946.  Conservative estimates confirm that Semple’s victory totals are in the 2500 area.  And the reasons are clear: Semple had a knack for acquainting himself with the horses he raced, and for knowing when to make one’s drive.  “I never used much whip,” Semple observed.  “Every time you hit a horse enough to hurt him bad he flinched enough to lose a little…”

Tragedy struck the Semple stable on Friday, the 13th of December, 1968, when five horses perished in a fire that levelled the large barn in Kensington.  As a result of this setback, and a serious head injury suffered in Moncton in 1964 (which caused occasional blackouts during competition), Earle cut back on his harness racing, ending his career entirely in 1977.

Despite the fact that he was no longer an active participant in the sport, Semple continued to be an avid harness racing fan until his death on December 29, 2002 at the age of 93.  In July 2002, only months before his passing, a special race had been held at the Charlottetown Driving Park in honour of this racing legend.

Never a man to boast of winning before the race, nor one to bet on the horses he drove, Earle Semple brought a simple dignity and refreshing humility to his chosen sport.  A man whose name was synonymous with the Winner’s Circle, Earle Semple of Kensington was a most worthy inductee to the Prince Edward Island Sports Hall of Fame.