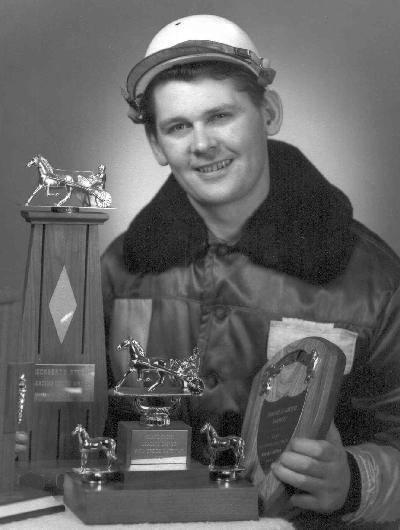 A harness racing legend, Clarkie Smith attained the 2000 win plateau at Saint John’s Exhibition Park Raceway on June 13, 1982, becoming only the second Maritime reinsman to achieve this lofty mark.  His feat is even more phenomenal when one considers the fact that he raced only six months of the year for the first half of his career.

Born August 6, 1937, in Hunter River, P.E.I., Clark Harold Smith was the fourth child of Cyril and Marjorie Clark Smith.  A natural athlete who excelled at baseball and hockey as a lad, Clarkie Smith was gifted with razor-sharp reflexes that might have served him well in several sports.

Immediately following an initial period of learning under his father’s watchful eye, Clarkie went to work as a trainer-driver for Stanley Mayhew of Kinkora, who at the time possessed one of the largest stables in Eastern Canada. After leaving Mayhew Stables in 1960, Clarkie formed his own stable, which went on to become one of the most powerful public stables in the Maritimes.

At this time, while residing in Brookfield, P.E.I., Clarkie’s usual routine was to jog and train horses along the roadside during the winter months, and then move them into the facilities at the Charlottetown Driving Park at the end of April.  It was here that he would finish training his stable for the racing season, which included races at either Summerside or Charlottetown and lasted until the end of Old Home Week in mid-August.  Clarkie would then move his stable either to Sackville Downs outside of Halifax, or to the Maine Fair circuit.  Thus, for the early part of his career, Clarkie raced approximately six months of the year, from May to November.

This pattern was followed until the spring of 1971, when he made a permanent move to Lower Sackville, Nova Scotia and Sackville Downs.  As a result of this move, he was able to race his stock for the entire year, owing to a winter racing program at Halifax.  Clarkie remained a star attraction at Sackville Downs until May, 1979, when he moved his stable to Saint John’s Exhibition Park Raceway in New Brunswick, becoming one of the raceway’s leading drivers.  He later moved to Campbellville, Ontario, where he broke and trained colts – one of which was a future world champion – for Doctor Glen Anderson  and Charles Juravinski. In the late 1990s, he returned to PEI, where he resides today.  He spends his time training at the Charlottetown Driving Park, as well as at his farm in Oyster Bed Bridge.

Clarkie Smith reined his first lifetime win during his first ever drive in 1952, at Chatham, N.B., when he scored Bobby Hunter in an early-closer race.  In the ensuing years, he had hundreds of horses, from nickel plugs to free-for-allers, from cripples to perfectly sound stake colts, and the way that Clarkie Smith handled them all earned him a reputation that ranks him among the all-time greats in the sport.

As of the 2003 racing season, Clarkie had been on the bike for 2243 lifetime wins.  He has been leading dash winner in the Maritimes, and leading driver at Summerside Raceway, Charlottetown Driving Park and Sackville Downs.  Clarkie has also won the Heckbert Studio trophy as the annual Lobster Carnival’s top driver, and has been honored at the Summerside carnival with a “Clarkie Smith Day.”  He was awarded the British Consol Trophy as the leading driver during Old Home Week in 1958, 1959, 1960, 1963, 1966, 1967 and 1968.  Only two other horsemen have equaled Clarkie Smith’s domination of the British Consol, these being the late Joe O’Brien [inducted 1968] and the late Francis McIsaac [inducted 1981]. In 1969, Clarkie Smith would be the fifth leading driver in all North America, with a sensational .409 average, winning 91 dashes in 382 starts.

A complete horseman – one who can shoe, train and care for his horses as well as drive them – Clarkie is held in the highest regard by all his peers.