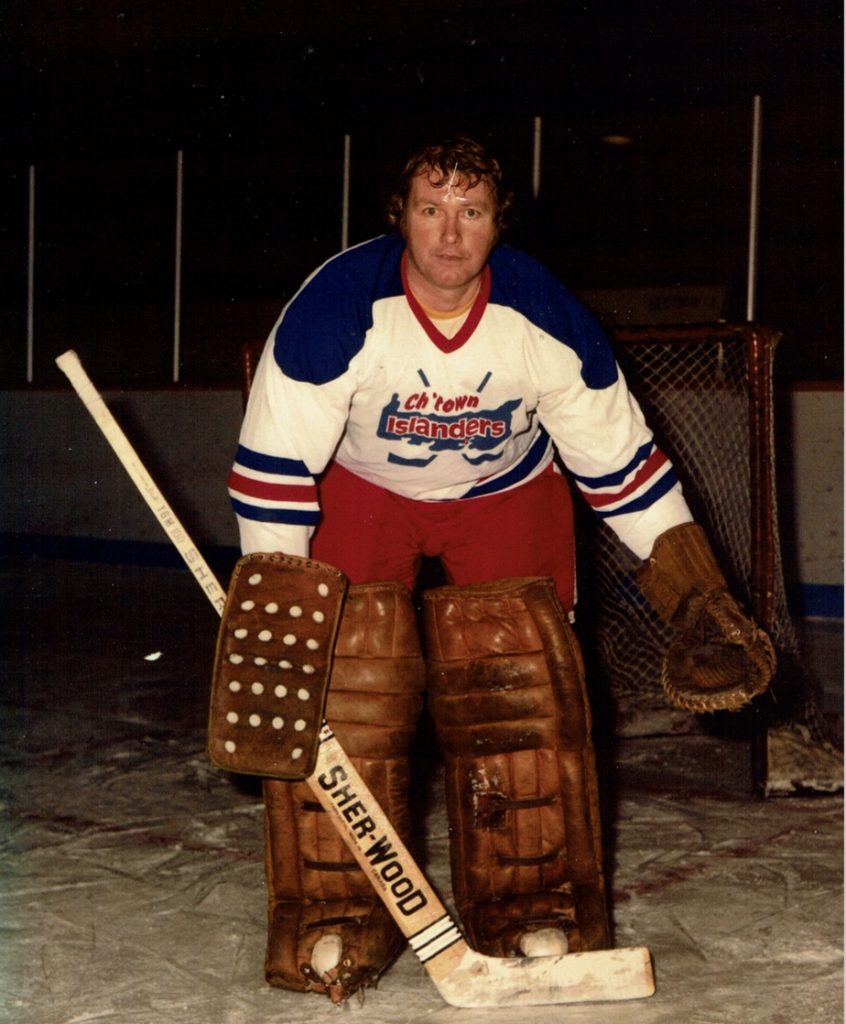 Gerard Smith has had a long career as a player and coach in many Island sports including hockey and baseball. He’s played on three national championship teams (two in hockey and one in baseball) that have been inducted into two sports halls of fame (the Islanders intermediate hockey team from 1981 and the Islanders senior baseball team in 1977 in the PEI Sports Hall of Fame and the 1973 Saint John Mooseheads intermediate hockey team inducted in the the New Brunswick Sports Hall of Fame.

He was born in Charlottetown on September 10, 1942 and has spent many years in Summerside. He got involved in sports at an early age by hanging around older players in the community and learned how to play baseball and hockey from his cousins Phonse and Kenneth Smith.

His baseball career began when he was 13 years old playing with the Mount Stewart Legionnaires, a new team in the Kings County Baseball League. Smith played at first base on a team that grew and won the PEI Intermediate “B” championship in a sudden death game over Tignish. Mount Stewart eventually lost to Maccan, Nova Scotia in a disputed Maritime final. He continued to with KCBL teams through the 60’s and 70’s.

Smith played on PEI’s first baseball team in the 1969 Canada Summer Games in Halifax. PEI finished 2-3 and lost a chance to play in the medal round losing 8-5 to Quebec. He was coach of the Canada Games baseball team for PEI in 1973 in New Westminster and Burnaby, B.C. A loss to Ontario prevented PEI from making the medal round that year.

He also played fastball in the late 60’s and early 70’s. In 1972 he joined the Sportsmen’s Club in the City Fastball League and played in the nationals in Edmonton where the PEI champs finished a respectable 1-3

His playing career was long and intertwined with many years of coaching in both baseball and hockey.

Smitty was a goalie for the Hardy Cup winning Saint John Mooseheads in 1972-73 and again with the Charlottetown Islanders in 1980-81. The Islanders were inducted as a team to the PEI Sports Hall of Fame in 2013.

The 1972-73 Canadian Intermediate championship saw the 30-year old Smith play in the nets for the Saint John Mooseheads won six playoff series that year and won the Hardy Cup three games to one facing the Rosetown, Saskatchewan Red Wings. Another Islander on the Mooseheads was Alfie Handrahan who would later play in the WHA. Smith was in the nets in the deciding game won by Saint John, 3-2. He played a pivotal role in the victory with a number of big saves. The Mooseheads were inducted in to the New Brunswick Sports Hall of Fame in 2008.

Eight seasons later as a 38-year old veteran goal, Smith helped the Charlottetown Islanders to the Hardy Cup in 1980-81 as they swept the Winnipeg North End Flyers in a gruelling road series, three straight. It was the first national hockey championship for any Island team and a rough and bitter three game set throughout.

Smith also played on the 1977 P.E.I. Islanders that won the silver medal at the Canadian Senior Men’s Baseball Championship in Brandon, Manitoba that made it to the final game but lost to British Columbia. He was a catcher and also played first and third. The Islanders were named to the PEI Sports Hall of Fame as a team in 2016.

Smith tended nets for the Saint Dunstan’s Saints University hockey team from 1962 to 1964 and later played for the Sandy’s Royals Maritime Intermediate “A” champs in 1964-65 and the Royals that won the 1969-70 Maritime Senior “B” title.

He became the starting goalie for the Saint Dunstan’s Saints in 1963-64 after his rookie year were he was back-up to Frank “Butch” Callaghan. The Saints tied UNB for first place in the Atlantic Conference in ’63-64 but there was no playoff. UNB was awarded first place because they defeated the Saints twice during the season and were awarded the championship. His team mates included PEI Sports Hall of Famers Bill MacMillan, Vince Mulligan and Mike Kelly. The team was coached by Jack Kane Jr.

He coached the 1970-71 Summerside Crystals Island Jr. B hockey champions and coached both the Peakes Little Leaguers and Mosquitos to Maritime minor baseball championships in 1972.

As a race official, Smith has served many years as the Race Secretary for Summerside Raceway where he began in 1972 and took over as Race Secretary at the Charlottetown Driving Park in 2005. He also has similar duties for harness racing tracks in Inverness, Nova Scotia, Exhibition Park in Saint John along with two Raceways in Fredericton and Woodstock, New Brunswick. He was named the Atlantic Provinces Harness Racing Commission Official of the Year in 2016.

Following his years at St. Dunstan’s, Smith took a job teaching school at St. Teresa’s (Peakes) and played senior hockey with the Parkdale Sandy’s Royals in 1964-65. One of the highlights of the season was the Royals playing in one of the first international games at the Forum in Charlottetown where the West German national team defeated the Royals, 6-3. Smith made 36 saves tending the nets. The Royals went on to claim the Maritime “A” hockey title when Campbellton refused to play the Island champs.

Smith was no doubt one of the best intermediate and senior goaltenders in the 60’s and 70’s. He also showed his ability to coach by guiding the Summerside Crystals to the Island Jr. B championship in 1970-71 with playoff series wins over Sherwood-Parkdale and UPEI, coached by old team mate Vince Mulligan. Future NHL coach and general manager Doug MacLean was part of that Crystals team along with Jim Clark who later joined MacLean in Columbus with the Blue Jackets. Future Blue Jackets radio play-by-play man George Matthews was one of Summerside’s goalies. The Truro Bearcats won the Maritime Junior B title in a five game series facing the Crystals that spring.

Smith was back in university hockey in 1973-74 as he went back to school after sabbatical leave and joined the UPEI Panthers that finished third in the AUAA. He was several years older than most of his team mates but into his peak years as a goaltender. He was also reunited with former team mate Vince Mulligan, coach of the Panthers.

Smith returned to coach the Summerside Crystals, now a Junior “A” team in 1974-75 taking over from the Forbie Kennedy and finished third in the Island Junior League. Summerside lost in even games to the Colonel Gray Colonels in the finals.

He became coach of the O’Leary Maroons in 1976-77 but the team moved to Tignish and became the West Prince Juniors who failed to make the playoffs. He also played in goal for the Charlottetown G.J.’s intermediate team that season. Charlottetown was not in a league and played in exhibition contests. The Campbellton Tigers swept the G.J.’s three straight to win the Eastern Canada Hardy Cup quarter-final. Smith played for Charlottetown in 1977-78 and in 1978-79 as the Island team joined the Southern New Brunswick Hockey League and finished fourth. In 1979-80 the G.J.’s were back in the Southern N.B. League and finished second d in the round robin playoffs.

The Hardy Cup season with the Islanders followed in 1980-81.

Smith turned to coaching Three Oaks in Island High School hockey in 1983-84. The Axemen won the championship in five games over Colonel Gray. Smith coached Three Oaks to another high school title in 1984-85.

It was back to Island Jr. Hockey in 1989-90 as Smith took over the reigns as coach from Dave Cameron and guided the Summerside Western Capitals to a second place finish and a hard fought seven game series in the finals where they lost 4-3 to the Charlottetown Abbies.

In 1993-94 he guided the Summerside Kinsmen in PEI Midget AAA who finished first and won the Island title over Alberton and hosted the regional Air Canada Cup where they lost the final game of the tournament to Halifax.

The next season, 1994-95 Smith returned to the Capitals, this time in the Maritime Jr. Hockey League finishing second in the North Division and lost the quarter-finals in five games to Amherst. He was named Maritime Jr. “A” Coach of the Year.

Smitty retired from senior hockey in 1981-82 but still played in old-timers tournaments. He played in goal in a tournament in Holland in 1976 and attended the World Cup in Montreal in 1987. He was part of the 2008 Charlottetown team that won a bronze medal at the 55+ National Games in Dieppe, New Brunswick in 2008.

In 2012 he received the Queen Elizabeth II Diamond Jubilee Medal for his role as a teacher and coach who helped many young people both in the classroom and on the field and in the rink.

He’s given so much to sport in the province as a championship calibre goaltender and coach over four decades and it seems success and Gerard Smith always go hand in hand.

It is fitting that this fine athlete and coach becomes a very worthy member of the PEI Sports Hall of Fame. 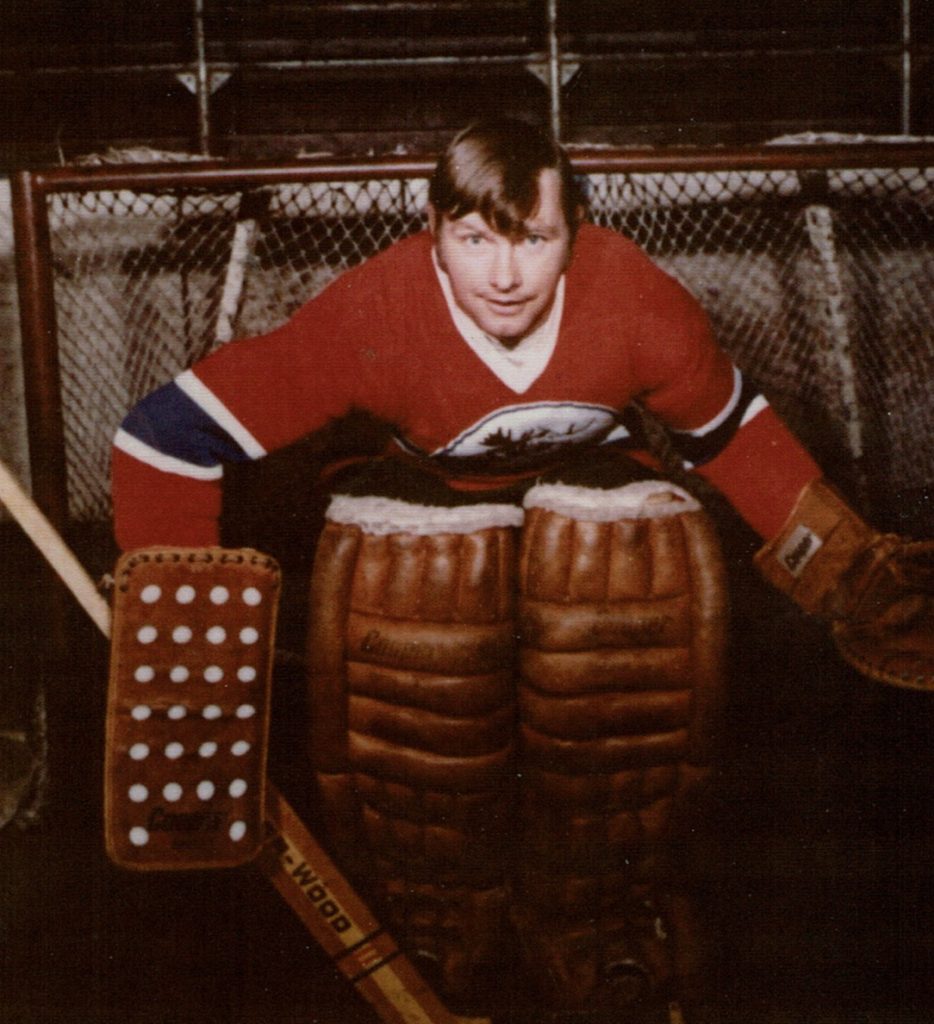