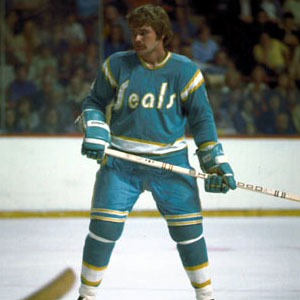 Bob Stewart was the most productive NHL defenseman that the province of PEI has ever produced.

Born 10 November 1950 in Charlottetown, Stewart began skating at the age of four on the frozen ponds of Parkdale. During his youth he would play minor hockey, high school, and senior hockey with the Rogers Rangers. By age 15 he was being recruited by Junior Teams in the region. At age 16 Stewart was offered tryouts by four different Ontario Junior Hockey League. He chose the Oshawa Generals where he played his first of three seasons  in 1967. During his last year of junior, 1969/70 he served as team captain and was chosen as a starting defenseman of the OHA All-Star Team.

Stewart was selected in the first round (13th overall) of the1970 entry draft by the Boston Bruins, the reigning Stanley Cup Champions. He spent the 1970-71 season with the Bruins farm club, the Oklahoma Blazers . The following year Stewart divided his time between the Boston Braves, and the Boston Bruins, for whom he made eight appearances.

In 1972 Stewart was part of a major trade that sent him to the California Golden Seals. He remained with the Seals for four years serving as captain for the final two, with his first NHL goal coming on March 17, 1972 versus the St. Louis Blues and goalie Jacques Caron. Due to a lack of support for hockey in the Oakland/San Francisco area the California franchise was sold and moved to Cleveland, Ohio in 1976 . His next two seasons would be spent playing with the Cleveland Barons where he would serve as captain for one of those years. Unfortunately the Cleveland franchise experienced financial problems and was amalgamated with the Minnesota North Stars in  June of 1978.

During the summer of 1978 Stewart was traded to St. Louis, and dealt to Pittsburgh the following year where he  experienced a career ending knee injury in 1980.

Over the course of his career Stewart was noted as a team player, a “defensive” defenseman and an aggressive checker who was often known as the team’s policeman .Stewart played in 510 games during his 9 year NHL career.

Throughout his career Stewart was known for his leadership ability while working as a player representative during the negotiation of the NHL Collective Bargaining Agreement. During the 1976-77 season the Cleveland Baron franchise was in crisis when their owner was unable to meet his payroll obligations and it appeared the players would be released without compensation. Stewart became prominent during the negotiations drawing  national  media attention. This included interviews with major newspapers, radio stations, and television networks including appearances on Hockey Night in Canada. His efforts led to a settlement in the dispute.

Stewart was active as an instructor at hockey schools throughout North America and Europe, gaining great personal satisfaction by passing on his knowledge to youngsters.

According to Wikipedia, Stewart’s career +/- rating of 260 is the lowest total in NHL history among players for whom the stat has been recorded.