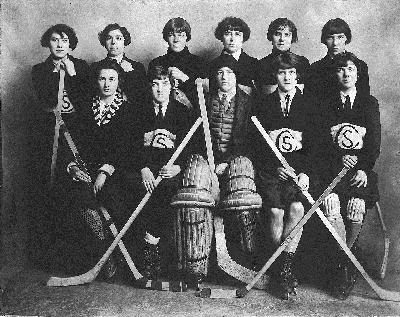 Formed in 1926, the Sisters were an amalgamation of two ladies teams, the Red and White Roses, during a period when women’s hockey was driven by a small group of talented athletes, whose persistence established the sport at a competitive level.

The Sisters, which included the likes of Ella Gay and Ruth Campbell , were no match for any of the other Island teams, and they soon proved that no team in the Maritimes was their equal, going on tours throughout the region where they rarely conceded a goal, let alone losing a game. The story goes that the champions of the USA, the Amazons of Albany, had challenged the Sisters to a game, but cried off when they saw how easily the Summerside team was defeating all-comers in the region.

With players of the calibre of Irene and Zilpha Linkletter , Irene Silliphant and others, the Sisters challenged for the Eastern Canadian Championship in Montreal in 1934 in a never-to-be-forgotten game with the Montreal Maroons  which ended in a 2-2 tie. When organizers tried to reschedule a re-match, the Sisters had to cry off as they did not have the financial resources to extend their stay. Desperate messages and pleas for assistance back home were received too late, and the team returned home still unbeaten.

Their proud unbeaten record came to an end in 1935 when it took a team of imports – the Preston Rivulettes  from Ontario – to defeat the Sisters at a packed rink in Summerside, but by then their legacy had been secured. They challenged again for Canadian championships, but the onset of war saw the team fold in the late 1930s, leaving behind a great Island sport story, and a record of success, that is unlikely to be equalled.