View All Inductees
Loran "Errol" Thompson - Hockey
Inducted on May 29, 1983 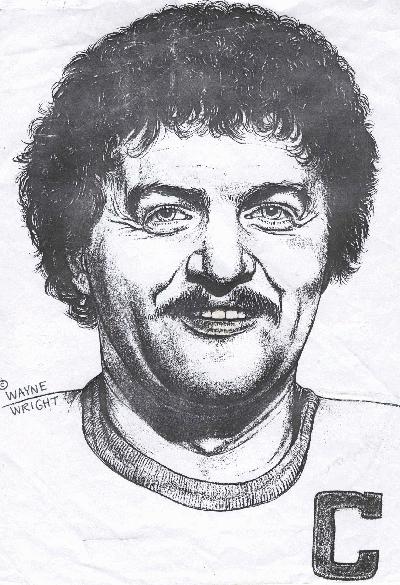 “The pride of St. Eleanors,” Errol Thompson would become only the second Toronto Maple Leaf in the history of the franchise to score over forty goals in a single season.

Born May 28, 1950 in Summerside, Loran Errol Thompson was, even as a youngster, a prodigy in the town’s minor hockey system, frequently scoring in the double figures during a single game.  He was part of the 1960 Summerside Peewee team, the first such team to travel to Natick, Massachusetts, in the International Friendship Series which was carried on for several years between the two centres.

Joining the Halifax Junior Canadiens at age sixteen, Errol left the team after three seasons to work his way through college at a variety of jobs.  In his spare time, nineteen-year-old Errol played defence for Sandy Frizzell’s Charlottetown Royals, receiving the princely sum of $15 per game.  “I was just playing for fun in that senior league,” Errol recalls. “We played only sixteen games that year.”

Thompson’s life was changed forever when Johnny Bower, the venerable ex-goalie of the Maple Leafs turned talent scout, was invited by Toronto’s local “bird dog,” Jack “Spy” Ready, to look at the Island hockey scene.  Bower was taken with the stocky, young Thompson, a defenseman with lighting speed.  The Maple Leafs eventually drafted Errol as their second choice behind Darryl Sittler in June of 1970.  “I was amazed,” said Thompson.  “Nobody had even heard of me and I had no idea I’d be drafted.  Lady Luck was really riding with me.”

Errol was assigned to the Leafs’ Central League farm team at Tulsa, where he would score fifteen goals after the Oilers’ coach Marcel Pronovost had the foresight to move him from the blue line up to the left wing slot.  The following year, injuries hindered his chance of moving up to Toronto, but Errol again displayed his considerable talent by scoring 21 goals in just 42 games.

He finally made the jump to the Maple Leafs in the 1972-73 season, but the apprenticeship was a tough one. He scored only thirteen goals and then seven goals in his first two NHL seasons, as Toronto coach Red Kelly preferred to stick with his veteran skaters.  By Errol’s third season, he had truly arrived in the big league, connecting for a 25-goal season, the first of six straight seasons in which he would reach the 20-goal plateau.

In the 1975-76 National Hockey League season, Errol scored 43 goals from the left flank of the league’s finest forward line, with Darryl Sittler at centre and Lanny MacDonald on right wing.  At the time, only Frank “The Big M” Mahovlich’s 48 goals during the 1960-61 season surpassed Errol Thompson’s 43 goals in the Maple Leaf team record book.

A broken arm early in the 1976-77 season sidelined Errol for nearly half the season, yet he finished the year with 21 goals and 16 assists in just 41 games. The following season, with Leaf coach Roger Neilson becoming increasingly critical of Errol’s offense-minded play, Toronto traded Errol Thompson on March 13, 1978, to the Detroit Red Wings for their hard-nosed captain, Dan Maloney, “a jalopy on skates compared to a real burner like Thompson.”

As a Red Wing, Errol would finish the season with 22 goals and 45 points.  In his next two full seasons, Errol Thompson scored 23 goals and 34 goals respectively, the latter total being the second highest of his career.

Errol’s 1980-81 selection by Ted Lindsay as the Detroit team captain remains one of his most satisfying achievements in professional sport.  This honour is made more unique when one considers the long-serving captaincies of the Leafs’ George Armstrong and the Red Wings’ Alex Delvecchio.

Always a goal-scorer rather than a bruiser, Errol fell into disfavour with then Red Wing coach, Wayne Maxner, with the result that he would subsequently be traded to the Pittsburgh Penguins for Gary McAdam on January 8, 1981.

On July 31, 1981, at the age of just 31 years, Errol Thompson announced his official retirement from professional hockey, despite the fact that the final two years of his contract were worth over $100,000.00 before bonuses per season.  To Errol’s way of thinking, the game of hockey that been so much fun as a member of Sandy Frizzell’s Senior Royals had lost its glamour.  In the end, a growing family and the more pleasant pace of life afforded by his native Prince Edward Island meant more to Errol Thompson than the lofty figures on a pro contract.

At the time of his selection into our province’s sports Hall of Fame, Errol Thompson’s 208 career goals in the NHL were the highest totals achieved by any Islander to play at hockey’s top level.  His scoring percentage of better than a goal every three games for the 599 games which he played ranks him ahead of such retired NHL stars as Andy Bathgate or Davey Keon.

Professional hockey will rarely see a more effortless skater than Errol, although goalies around the league breathed a little easier when it was known that the famed Thompson backhand shot would only be witnessed in local benefit games.

Errol Thompson, St. Eleanor’s ‘favorite son’, is a popular and creditable member of the Prince Edward Island Sports Hall of Fame. After retiring from the NHL, Thompson went to work as a marketing representative, first for Cola-Cola, then for Labatt. He was inducted into Charlottetown’s The Sport Page Wall of Fame in 1992.