View All Inductees
Westen "Bucko" Trainor - Hockey
Inducted on May 29, 1983 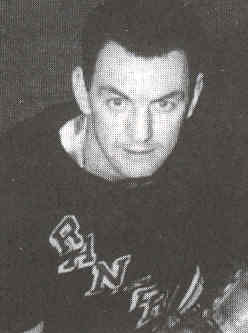 Wes “Bucko” Trainor was the only Prince Edward Islander to play in the National Hockey League during his era.  He was, in fact, only the third Islander to enter the prestigious league, performing at centre ice for the top forward line of the New York Rangers, between wingers Tony Leswick and Edgar Laprade.

Born September 11, 1921 in Charlottetown, Weston Thomas Trainor began his hockey career on the frozen rivers and ponds outside Souris and Charlottetown.  No organized hockey existed for Island youngsters in the 1920s, and Bucko was fortunate that the 1930s would see Charlottetown become the first Maritime town to have a peewee program.  Already, Bucko’s later trademarks, such as his tricky stick-handling and tireless skating, were in evidence.

The first of many outstanding teams to which Bucko would belong was the Charlottetown Junior Royals of 1938-40.  Coached by Walter Lawlor, it is regarded as one of the finest Island teams ever to compete nationally.

The Second World War rerouted the careers of many Island athletes. Bucko became captain of the Camp Petawawa team, leading it to the league title as one of that team’s feared “Four Horsemen.”  Trainor’s five and a half years of war service with the Canadian Army’s Radar Unit would have a critical impact on his future professional career.  A severe knee injury, the result of a stray gun tray, would give Bucko the “trick knee” that plagued him for over a decade of hockey action.

Following the war, Bucko joined the 1945 Dummondville team of the Quebec League, moving up to the Moncton Hawks the following season.  The 1946-47 Hawks had several strong Island links, including coach “Windy” Steele [inducted 1973] and manager George Schurman, both of Summerside, as well as front linemen “Mousie” Dowling [inducted 1981] and “Buck” Whitlock [inducted 1977] of Charlottetown, and goalie Bob Schurman [inducted 1973].  Bucko, the team captain, led the Hawks to the Big Four League title, contributing 20 goals and 45 assists for eighth place overall.

A pro contract with the St. Paul Saints of the old United States Hockey League followed, with Bucko making 7 goals and 8 assists. Returning to the Island after this first season with the Saints, Bucko determined to build himself up physically with baseball and other off-ice activities.  The plan worked, and his second season with the Saints saw him involved in a three-way race for the scoring title with Ray Powell and Bert Olmstead.  Bucko’s 49 assists made him the league’s leading play maker.  Only a call from Rangers boss Frank Boucher prevented Bucko from winning his first scoring title as a pro.

As centre man and right winger, Bucko Trainor achieved the Big Time with the 1949 New York Rangers, wearing sweater number 14.  In the words of Rangers coach Lynn Patrick, “If all the boys hustled like Bucko Trainor, this team wouldn’t look so bad.”

In his late season entry on the team, Bucko scored a goal and two assists, his first NHL goal coming on the backhand against hockey’s “Mister Zero”, Boston Bruins’ goalie Frankie Brimsek. However, the recurring knee troubles that were plaguing Bucko were further compounded when, during a 1949 pre-season game with the Rangers against New Haven, a stray puck broke his jaw in three places.

When Charlottetown joined the Maritime Big Four at the outset of the 1950 season, the team’s directors were anxious to acquire Bucko Trainor, with the result that the New York Rangers sold him to the Island team for an undisclosed sum of money.  As Islanders’ captain, Bucko Trainor would rack up a league-leading 73 assists to go along with 25 goals for Murph Chamberlain’s team, a record good enough to earn him the Big Four League’s Most Valuable Player Award.

In 1952-53, Bucko was invited to take over the floundering Grand Falls senior team in the All-Newfoundland League.  A typical sports column of the day reads: “The most popular sport in town today is Bucko Trainor, colorful playing coach of the Grand Falls team.  Not since Gordie Drillon have we had a player like Trainor.”  Although he would again rejoin the Charlottetown Islanders, and later return to Newfoundland, this assessment has held true.  There has rarely been a hockey leader of the stature of Bucko Trainor.  In every case, a Bucko-led team would take the championship.

After retiring as an active player, Bucko Trainor would become the long-serving manager of the Charlottetown Forum, as well as mentor to several talented junior teams around the city.

Throughout his fifty years of association with Island hockey, Weston “Bucko” Trainor’s unique blend of athletic talent, personal courage and determination made him a most revered member of the Island sporting community.  It also makes him a most worthy member of the Prince Edward Island Sports Hall of Fame, to which he was inducted on May 29, 1983.

Wes Trainor passed away in 1991. He was posthumously inducted into Newfoundland and Labrador Hockey Hall of Fame in 2005.