View All Inductees
Eddie Tremblay - Boxing
Inducted on May 13, 2000 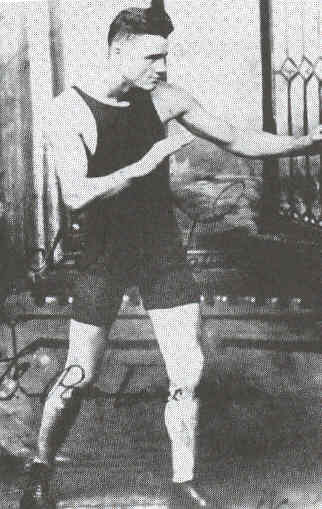 To boxing fans, Edward “”Eddie”” Tremblay, was a familiar name across Canada, the U.S. and Europe during the early 1900’s.

Eddie was born in the small West Prince community of St. Louis  in 1896. He left his home as a teenager to earn a living south of the border, settling in Boston, Mass. After a short but successful amateur career , Eddie joined the U.S. Navy where he served during World War One. It was during his navy days that Tremblay gained a reputation as a world class boxer

Eddie turned professional in 1916. With his natural talent he quickly became one of the highest ranked fighters in the navy. Within three years of turning professional Eddie won the titles of U.S Navy Middleweight and Light Heavyweight Champion. Eddie’s biggest win while a member of the US Navy was his 2nd round TKO over Harry Greb, “”The Pittsburgh Windmill””. The bout took place in London England in 1918 at the big International Allied Boxing Tournament. Greb went on to become World Champion but refused to sign on for a rematch with Tremblay.

During the period of 1919-21 Eddie fought at an amazing pace facing 186 opponents, knocking out 162. He was never knocked out and only failed to go the distance on two occasions.

He left the navy in 1922 hoping to earn a living in boxing. Fighting out of Boston  he developed a reputation as a tenacious opponent with tremendous knockout power. While in Boston, he earned the title of  New England Light Heavyweight Championship  in 1923

Many of his opponents achieved legendary status such as Jack Dempsey, Gene Tunney and Sam Langford . Most promoters of the day agreed that Tremblay was World Championship material but never seemed to get the breaks that would allow him to cash in on his natural fighting ability.

Tremblay only fought once in Prince Edward Island, an exhibition match against one of his husky sparring partners. The fight was held in New Annan in August of 1921. Big Jim Pendergast of Kensington promoted the bout.

Eddie moved to California in 1924 where he joined the Los Angeles Fire Department which provided him with a steadier source of income. He retired from boxing two years later in 1926.

In total Tremblay competed in 350 matches, the most ever by a native Islander. Eddie Tremblay passed away in 1974 at the age of 78.

Eddie Tremblay ranks among the greatest boxers that the Island has ever produced.