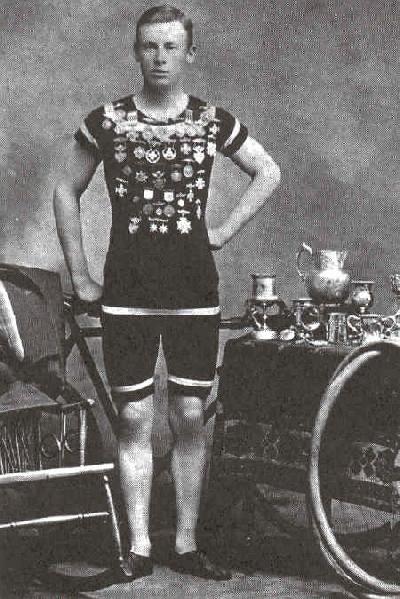 One of the fastest cyclists in Canada before the turn of the century, Lorne Robert “Silver” Unsworth is hailed as the first Prince Edward Island sports hero.  Born in Sherbrooke, Quebec, May 10, 1878, he resided in Charlottetown from the early 1880s until his untimely death in July of 1917. During his lifetime, he won over fifty awards in Maritime competition, along with the admiration, and the hearts, of Islanders across the province.

Unsworth’s competitive cycling career began in 1895, when he won the Provincial Cycling Championships in the half mile event at Summerside on July 1, 1895. One month later, on August 2, he was the Provincial Champion in four events at Charlottetown.  In Summerside on August 11, he was crowned Maritime Champion in the quarter, half, one, two and three mile races.  In the one mile NB-PEI Championship that same year, which was witnessed by several thousand fans, he took the top prize with a time of 2 minutes 38 seconds – only six seconds off the Canadian record.  He claimed top prize in this race again the following year.  On July 30, 1896, he won the two mile race at Halifax in the “Wanders Electric Light Sports”, witnessed by upwards of 6000 people, and was subsequently tendered a parade and reception on his return home to Charlottetown.

“Silver” Unsworth was recognized nationally when he was cited for his cycling abilities and accomplishments in the January 1896 issue of the Canadian Wheelman Magazine.  In September, 1897, he received further national attention when he won the quarter mile in a brilliant finish over one of Canada’s top amateur cyclists, N. A. Caussiart of Montreal.

1897 also saw Unsworth win the Maritime quarter and half mile Championships, two Atlantic Championships at Truro and, with the help of two other Island riders, the Massey-Harris Trophy at Saint John. In 1898, he set a Maritime record in the three mile event, also taking the Maritime title in quarter, half and five mile races.  He continued to excel in cycling events for several years, with his final known victory in competitive cycling coming just before his retirement in 1904, when he won the Provincial title in the 1 and 2 mile races at Old Home Week.

Lorne “Silver” Unsworth was a favourite with the crowd, due partly to his exemplary and honourable character, and partly to his spectacular headlong finishes.  One incident in particular that endeared him to his fans took place on September 15, 1896, during a half mile race. Upon crashing in the homestretch, Lorne picked up his wrecked bicycle, and, as hundreds cheered, carried it over the line for a second place finish.

In addition to cycling, Lorne Robert Unsworth was an outstanding rugby and hockey player. He played rugby for the Abbies in 1985, and was a star with the Abegweit Crescents from 1897 to 1903.   He also captained the team during the 1901-02 season, leading them to the Provincial Championship title.

Regarded as one of the most sportsmanlike contestants that ever entered a race, he was also hailed as one of the most honorable sportsmen that ever adorned the athletics of our country.  In recognition of these admirable qualities, Lorne Robert Unsworth was inducted posthumously into the Prince Edward Island Sports Hall of Fame on July 16, 1978.