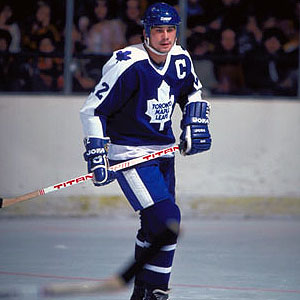 “In professional hockey there are few athletes who can dominate with their physical play and still rank among the top scorers in their league. Rick Vaive was one of those rare athletes.

Born in Ottawa in 1959, Rick Vaive arrived in Charlottetown in 1970 at the age of 11. It was evident from his early years in the Charlottetown minor hockey program that Rick had tremendous potential. As a midget aged player he made the jump to the Colonel Gray Colonels of the P.E.I. Junior Hockey League. During the 1975-76 season he was named rookie of the year in the Island League. The following year Rick stepped up to the Quebec Major Junior League joining  the Sherbrooke Beavers. He became an instant star with Sherbrooke winning rookie of the year honours and finishing among the league leaders in scoring. In 1977 he was selected to represent Team Canada at the inaugural World Junior Hockey Championships held in Quebec City.

Rick cut his fine junior career short to make the jump to professional hockey. In 1978 he signed with the struggling Birmingham Bulls of the World Hockey Association as an underage junior. His tough yet effective style of play was never more evident as Rick led his team in scoring while leading the entire league in penalty minutes. When the WHA folded in 1979 Vaive was among the top prospects in the expansion draft. He was selected 5th overall in the  by the Vancouver Canucks.

Rick began his rookie season with Vancouver but played in only 47 games before being traded to the Toronto Maple Leafs on February 18, 1980.  The Canucks were struggling for wins and the impatient Vancouver management decided to make some changes that they would later regret. Vaive and fellow junior superstar Bill Derlago were sent to Toronto in exchange for the popular Dave “”Tiger”” Williams and fellow tough winger Jerry Butler.

Rick had an immediate impact on the Maple Leafs. After a solid first season he made  history becoming the first Maple Leaf to register over 50 goals in a single season. In doing so he surpassed the 20 year old record established by the legendary Frank Mahovilich. After being rewarded with the title of team captain Rick continued to rewrite the Leaf record book by breaking the 50 goal plateau during the 1982-83 and the 1983-84 season. He registered three additional thirty goal seasons as Leaf captain before being traded to the Chicago Blackhawks in 1987. He was dealt from Chicago to the Buffalo Sabres during the 1988-89 season where he remained until his retirement in 1992.

Vaive established some very impressive statistics over the course of his 13 year NHL career. He registered nine consecutive 30 goal seasons and managed to reach the 20 goal plateau each year with the exception of his final year in Buffalo. Rick participated in three consecutive all star games from 1982-1984 and represented Team Canada at the World Hockey Championships. His career totals include 441 goals , 347 assists and 788 points in 876 regular season games. These numbers represent the highest totals of any Islander to have played in the National Hockey League.

He has a Wikipedia entry at http://en.wikipedia.org/wiki/Rick_Vaive