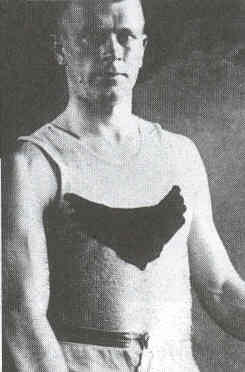 George Clark Walker made an outstanding contribution to sport as an individual competitor. He was also a part of many athletic teams, not only as an active competitor, but also as a coach, athletic director and administrator both in this province and in other provinces of our nation.

Born May 27, 1895 in Brackley, Prince Edward Island, George Walker served in the First World War, along with his father and two brothers. He was decorated for bravery at Vimy Ridge in August of 1917, where he laid telephone lines in the open while under heavy German fire, carrying on for two days despite being gassed and suffering from exhaustion.  He was also twice wounded in action, receiving a severe wound in the right leg, and a bullet through the right shoulder. Additionally, he lost his right eye, had his hearing impaired and had the bottom lobe of his right lung badly infected as the result of a gas attack. Due to these extensive injuries, doctors told him that he would be physically limited and unable to lead an active life; nevertheless, upon returning to Canada, he set for himself the allegedly unattainable goal of rehabilitation.

To develop his badly wounded right leg, George took up bicycle racing. Over a seven-year period following the war, he worked on a program of athletic activities that re-established his good health and enabled him to be regarded as one of the Maritimes’ leading athletes. He won the Halifax Herald 45 Mile Bike Race in 1923, 1924 and 1925, setting a record of two hours and 14 minutes, which still stands.  In 1924, he won the 105 Mile Bike Race in Montreal staged as a trial for the 1924 Olympics, which he later chose not to attend. In track and field, he competed mostly in the ¼, ½ and one mile runs, and in 1925 was chosen one of the top six outstanding Maritime athletes by sports writers.

George was also active in several other sports. He played basketball on top Charlottetown teams from 1920 to 1925, and he was an outstanding backfield player on the Abegweit English Rugby team during the same years.  From various track and field meets at different Maritime Centres from 1920 to 1925, George Walker captured 18 cups, four shields and 54 medals. He was the nozzle man for the Charlottetown Firemen’s Quarter Mile Hose Reel team that set the world record for pulling the 500-pound reel in 1925. Walker also won man medals as a dancer in the Highland Fling and Sword Dance, and performed the Fling for the Governor-General in 1923. At the Quebec Winter Carnival in 1927, he won the novice one mile snowshoe race. He was an official basketball referee in the provinces of Quebec and Saskatchewan, and won the gymnastics championship at the Canadian YMCA Physical Directors competition held at Lake Couchiching, Ontario in 1926.  His job as an athletic administrator drew him into YMCA work, and he retired as General Secretary of the YMCA at St. Thomas, Ontario in 1961.

At 80 years of age, in 1975, George still kept fit in many ways, including skiing, skating, swimming and cycling. Because of the excellent example set by his devotion to physical fitness, he was named Outstanding Senior Citizen of the Year for 1982 in the town of St. Thomas, Ontario, where and his wife resided for over 40 years. In 1983, he was honoured with an induction into the Canadian Association for Health, Physical Education and Recreation as a pioneer.

George Walker remained active until his early nineties, slowing down only when his health began to deteriorate. He did not recover from this downturn in his health, and eventually passed away on November 22, 1993, at the age of 98.He was buried in Pownal, Prince Edward Island. As a man who truly personified that old saying “That which does not destroy me will make me stronger,” George C. Walker was a living testament to the unbelievable feats that can be accomplished with perseverance and hard work; there is unlikely to be another like him.