View All Inductees
George Walters - Track and Field
Inducted on May 5, 1980 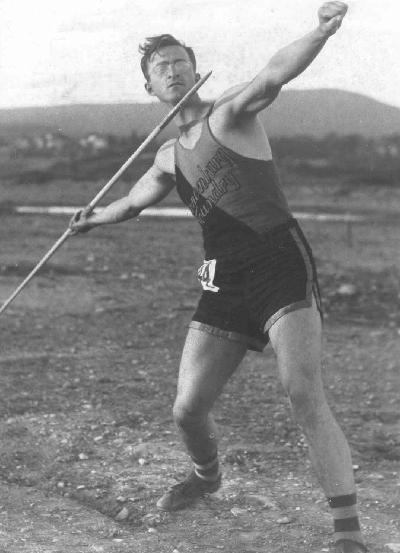 Along with the other lads who made the Lunenburg Academy track and field famous in the 1930s, George Albert Walters got himself into shape by running dozens of laps around the old school. This typified the determination that would push George Walters to more than two dozen Maritime Championships and records, not only in his specialty, the javelin, but also in the discus, shot put and hammer throw.

Born in Lunenburg County (community of Parks Creek) in 1914, the son of Captain Cyrus Walters, he was adopted at birth and went by his adopted parents’ name of Nauss until he was 21, at which time he once again took his family name of Walters. For twenty years, from the time he first stepped into athletic prominence with his Lunenburg track team (where he set a maritime javelin record) until his last meet, the Labour Day Meet held in Charlottetown at Memorial Field in 1953 (where he picked up 21 individual points) George would reign as one of the leading maritime athletes in the field events. Even though he hung up his spikes in 1953, he remained active in the sport until 1959, officiating and participating in many Island meets up until that date. Walters held the Maritime javelin record for seventeen years. He bettered his own record in this event on three occasions, and in 1948 his mark was 167 feet and 7 inches.

As a school boy, George made a clean sweep of track meets by winning the Maritime Interscholastic, Maritime Junior, Maritime Senior and the Maritime Firemen’s Tournament. George’s athletic career was at its peak in 1936, when he won individual points honours at the Maritime Senior Championships at Saint John. In that meet, he won the pole vault, javelin and hammer throw in addition to thirds in the discus and shot; he also set a Maritime record in the javelin.

From 1937 to 1947, at an age when most field competitors are at the very prime of their athletic ability, George Walters did not participate in his special event; work with the Halifax newspaper and a theatre company kept him from athletics. It was in 1941 that Walters made the move to the Island, taking over the management of the Prince Edward and Capital Theatres of Charlottetown.

1947 brought favourable conditions for the build-up of the Island’s athletic community, and so George Walters assisted in the re-organization of the famed Abbies track and field team. Acting both as coach and captain of the Abbies team, Walters made his amazing re-entry into Maritime athletic prominence. The Abbies would go on to win two Maritime Athletic Championships in 1948, as well as several of the region’s invitational meets. In the 1948 Maritime Championship meet held in Fredericton, George not only broke his own Maritime record in the javelin, but was also high point athlete of the day. In 22 meets with the Abbies, George Walters would be the high point scorer in six of these, and runner-up in four others. He trained to accomplish these feats while simultaneously giving endless hours to coaching the young athletes of Charlottetown.

Prior to his sudden death on February 21 1960, this veteran athlete and community leader had acquired a special place in the affection of his adopted province of Prince Edward Island. George Walters had that rare brand of perseverance and idealism embodied by the ancient sport of javelin throwing. In this age where the Olympic Spirit is threatened by the more selfish nature of humankind, there is great satisfaction in recognizing the life of George Albert Walters. The indelible mark that he left on the Island’s sporting scene was recognized on May 5, 1980, when he was posthumously inducted into the Prince Edward Island Sports Hall of Fame.