View All Inductees
Nancy White - Speed Skater
Inducted on May 5, 1980 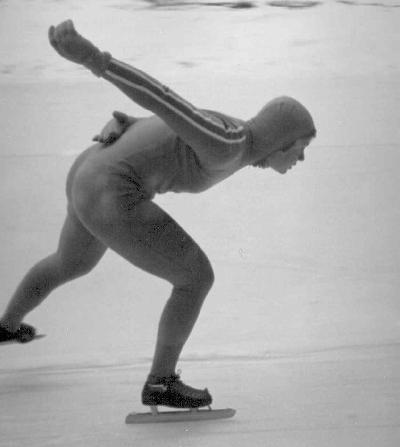 Individuals who have participated in other sports as well as speed skating say that no sport is quite as demanding. Suited to her natural strength and stamina, speed skater Nancy White would become the Island sweetheart, and a celebrity to her native Montague, in the tradition of other Canadian sports heroines, such as Nancy Greene or Elaine Tanner.

Born May 26, 1959, Nancy Dianne White began her skating career at the age of twelve with the Montague Silver Blades Club, under coach Peter Milburn. During her first Island competition, she won two medals, after having worn speed skates on only four occasions. She placed fourth overall in the Maritime Speed Skating Championships in her first year of competition. In 1973, her second competitive year, she finished first in the Maritime Championships, a victory that she repeated the following year. She also finished in the top twelve in the 1974 Canadian Open, and took seventh overall at the 1974 Canadian Outdoor Meet, specializing in the sprints.

At the beginning of the 1975 season, Nancy began training under Al Workman of Toronto, going on to win one silver and two bronze medals, finishing second overall in a Quebec tournament. In the 1975 Canada Winter Games, with Alberta as host province, Nancy placed third overall in speed skating competition. This competition had also served as tryouts for the national team, and her showing won her a place on the Canadian Junior team, with which she competed in China. In the 1976 Ontario Open, held at Sault St. Marie, Nancy placed first.

Along with her success in speed skating, Nancy excelled in other sports as well, including golf, badminton, baseball, hockey, basketball and track and field. She was P.E.I. Junior Ladies Golf Champion in 1976, and was a member of the province’s Amateur Ladies Golf Team in 1978 and 1979. In track and field, she was provincial champion several times in the 100, 200 and 400 metre sprints, relay and javelin, and represented P.E.I. at both the 1973 Canada Summer Games and the 1974 Junior Olympics. In recognition of this well-rounded athletic ability, she was presented with the Lieutenant Governor’s Award in 1975 for outstanding achievements in amateur sports. In this same year, she was also named P.E.I. Junior Female Athlete of the Year, and went on to be recognized as the province’s Senior Female Athlete of the Year in 1978.

The Canada Games competition of February 1979, held in Brandon, Manitoba, proved to be one of Nancy’s finest moments in sport. Racing before a contingent of Islanders for the first time during major competition, Nancy White would break the supremacy of her brilliant speed skating rival from Quebec, Sylvie Daigle. In doing so, Nancy glided to the first gold medal ever won by Prince Edward Island in Canada Winter Games competition, winning the 3000-metre event with a time of 5:49.58. In typical Nancy White fashion, she was more concerned and disappointed with not winning the gold in the 500, 1000 and 1500 metre events, having to settle instead for silver. Following the Canada Games, Nancy competed in the North American Speed Skating Championships held in Winnipeg in February of 1979, taking five medals – two silver and three bronze – from the contest.

1980 saw Nancy take a trip to her province’s Sports Hall of Fame at an age when many athletes have barely begun their careers. Joining previous Montague inductees, Fulton Campbell [inducted 1975], Bob Simmons [inducted 1975] and Bill MacKinnon [inducted 1971], Nancy White has won the affection of all Islanders for her headlining performances in North American speed skating competition. At 21 years of age, she was the youngest person ever to be inducted into the Prince Edward Island Sports Hall of Fame.

After being inducted, Nancy traded in her skates for golf clubs. Following a first-place finish in the 1982 Ontario Amateur, she shot her amateur career low of 68 in the first round of the 1982 Canadian Amateur, ultimately finishing fourth. She joined the LPGA in October 1984. She posted her career-best finish as a rookie in the 1985 Mazada Hall of Fame Championship, where she tied for eighth. In 1989 and 1990, she played limited schedules of twelve and eight events respectively. She had three top 20 finished in 1991, and posted her career-best score of 66 that same year during the final round of the Atlantic City Classic.

Nancy married John Brophy in January of 1995, and retired from the LPGA circuit the following season. The couple moved to Harrisonburg, Virginia in 2003, where they own a golf centre, at which Nancy gives lessons.