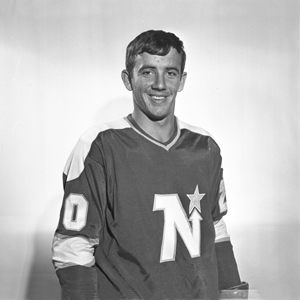 Prince Edward Island has produced more than its fair share of outstanding hockey players through the years, and in the opinion of many shrewd judges, Charlottetown’s Bob Angus Whitlock has been one of the best.
It certainly helps when your father is one of the all-time greats – the Old Lamplighter himself, Roy “Buck”Whitlock would play an important role in the young Bob’s development, which was honed around the ponds and rinks of Charlottetown.

At aged 10 he was already a stand-out in the Charlottetown Minor Hockey Association, and his early grounding stood him in great stead for what was to be a very successful junior career.

At 15 young Bob, a powerful left-winger with a rocket shot, was sent off to the mainland, where he his junior career began with the Halifax Canadians. 95 regular season points in 38 games in the 1967-68 season, coupled with a further 20 points in the play-offs hinted that Bob was set for greater things, and after enjoying another successful season with Kitchener and then Edmonton in 1968-69, the big leagues came calling.

In the fall of 1969, Bob signed his first big league contract, for the princely sum of $12,500 with the Minnesota North Stars. His NHL career in the green and gold, however, proved to be fleeting, with just the one appearance, where the record books show that he had a plus/minus of +1 and three shots on goal.

He continued to be a regular contributor though on the pro-circuit, scoring 26 times that season for the Stars farm team in Iowa, before packing his gear and taking his skills to the Cleveland Barons of the American league for the 1970-71 season. A season later Bob found himself in Phoenix, where he enjoyed his most productive season in the pro-leagues, racking up 79 total points for the Roadrunners and winning the Western League’s Rookie Of The Year Award.

The fledgling World Hockey Association was Bob’s next port of call, opening its doors in 1972 and providing a brand of hockey that Bobby thrived in – drafted by the LA Sharks but then traded to Chicago,  he notched 23 goals and 28 assists in his first season.  His totals for his WHA career, which saw further stops in Los Angeles and finally Indianapolis, were an impressive 81 goals and 179 total points in 244 games.

When his career in the WHA ended in 1976, Bob continued to ply his trade for teams in various leagues, always playing with the same intensity and continuing to put up impressive numbers. In 1978 he called time on his playing career, finishing up with the Trail Smoke Eaters in the Western International Hockey League. It is in Trail, BC, where Bob now makes his home, owning a successful insurance company.

Bob’s record of nine successful pro-seasons, in which he broke the 20-goal plateau seven times, does not tell the entire story. He was a true professional, grateful for the fact that hockey allowed him to make a living, and many of his contemporaries consider him to be one of the finest all-round athletes that the Island has ever produced, with a natural ability in many sports that made many green with envy. His slap shot was considered one of the hardest by anybody either inside or outside of the NHL, and he knew his way around the baseball and softball diamonds, representing the Island on two occasions when softball was at its height in popularity.

The name of Whitlock is synonymous with hockey greatness in this province. It is my pleasure tonight to induct into the Sports Hall Of Fame a man who can rightfully take his place alongside that of his father, and the other great hockey players produced by this province – ladies and gentlemen, Mr Bob Whitlock.