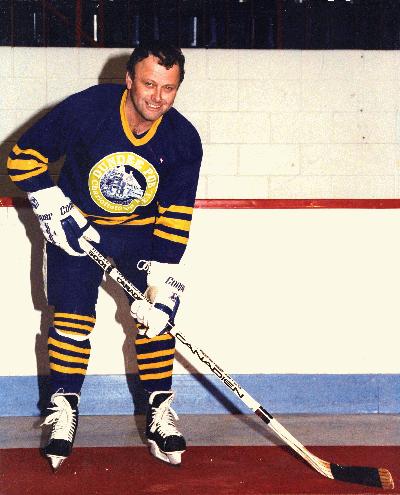 Many have written that the Whitlock name has been synonymous with the game of hockey and sport history itself on Prince Edward Island. My father was born into a family whose passion for the game of hockey has been undeniable. When my brothers and sisters and I got together in January and pieced together dad’s distinguished hockey and coaching career, we were filled with a true sense of pride.

I am honoured this evening to proudly welcome my dad, Gordie Whitlock, into the PEI Sports Hall of Fame, where he will graciously take his well- deserved place amongst the other former Whitlock inductees: dad’s uncle Roy “Buck” Whitlock and his cousin Bobby Whitlock. This induction is a true acknowledgement of dad’s successful hockey career as a player, coach, and administrator. However, most importantly, this induction signifies the recognition of a man who has spent over the last 50 years, giving back to his community everything that hockey has given to him and more.

Learning the Game and Giving Back

Although he did not play hockey until entering Pee Wee at the age of 12, fortunately, dad was encouraged by his coach “Hawk” Larter to continue playing. Dad would continue to emulate the power of a coach as he instilled confidence and passion in his own players.

Some memorable teams dad played with included: The Charlottetown Abbies, Maritime Midget Champs, Old Spain Penguins, Maritime Junior Champs, Maritime Intercollegiate Champs, and Sandy’s Royals and the Maritime Senior A Champs. While playing for The St. Dunstan’s Saints Hockey Team, dad’s coach Jack Kane would note that dad played a major role in the team winning the Maritime Intercollegiate Championship, and also in representing the AUAA at the National Championship. As a member of the lead scoring line with Mike Kelly and Maurice Roy, dad helped establish a scoring record for the most scoring points, which presently stands in the Maritime Conference when the team came a close second to the University of Manitoba in the national final.

Dad’s coaching career is endless. He has coached such teams as the Colonel Gray Colonels, St. Dunstan’s Junior Varsity, the Canada Winter Games Team, Team Atlantic, Team Atlantic – World International Tour Midget, and the Senior AAA Canadian Allan Cup Champs – The Armour Fence Islanders. Dad shared this senior championship with all of his close friends and family, as we celebrated a truly memorable moment in senior hockey history since no other Island team has ever won this notable title.

Dad’s evidence of giving back to the hockey community with teams he had once played for himself was recognized in his coach of the year awards with the Junior A, Midget and Saint Dunstan’s Junior Varsity Leagues. He has coached at all levels from Midget to University and has contributed provincially most recently as Technical Director and Past President of the PEI Hockey Association. He has also contributed on the national level as a Canada Winter Games Coach and an OHL Scout.

Dad continued to play hockey in the Oldtimers League, and most recently in 2005, at the National over 55 games in Whitehorse. The only team to ever really take him out was a group of priests called the Flying Fathers. I can still see dad flying into the boards with one of the “Fathers’ sticks” between his ankles. That injury got him off the ice unlike the time he jammed his thumb in the rink door, wrapped it up and kept playing. He was hard-pressed to take out of any game due to his competitive nature, but regardless, nobody could ever take the game of hockey out of him.

As I read through the endless letters of support for my father’s induction, a resounding theme had presented itself: Dad’s quiet demeanour complimented his innate ability to read the game on and off the ice. Many have cited dad’s skill, integrity, fairness, professionalism, competitiveness, determination, and drive as qualities that make him a true “Hall of Famer.”
One of dad’s oldest friends for over 50 years, Billy Mulligan noted dad was “Hockey Smart.” Billy, in addition to Eugene Power and Jack Kane, stated that for dad, it was always about the team. As an example, dad did not take all the credit for his sixth consecutive Island Junior Hockey League Championship series. After this huge win dad commented,”I just think I can provide some leadership from at the top. They (the players) are the ones doing it on the ice.”

Those who have coached with dad, regard him as a leader, mentor, and friend. Dylan Taylor, former UPEI Head Coach and the adopted third son recalled several instances where dad would meet up with former players on the road with whom he had a meaningful and lasting connection. Dylan reflected on dad’s focus, discipline, understanding, and vision, which were always about helping the game and the players improve. Dylan said it well, “Gordie has the courage and experience to face adversity and the passion and heart to lift the minds of those of a young learner.”

We are all very appreciative of the support dad has received for the recognition of the countless hours he has put into hockey in our province. It is with dad’s example of giving back that we in turn, give back to those of you, by saying thank you for acknowledging all of dad’s endless and selfless contributions to the game of hockey.

FAMILY and the Game

Dad not only passed on his knowledge and passion for the game of hockey to his former players, he has also passed on his love for the game to his children, and more recently, his grandchildren. Growing up, if we were driving in the old station wagon, a local hockey game was always playing loudly on the radio. If we were staying in a hotel, we would fall asleep to a local or national hockey game playing in the background.
Dad would say he loved the day each year when the ice went in to the Old Charlottetown Forum. His favourite sound was that of freshly sharpened skates across a clean sheet of glistening ice.

All of my siblings and I, could not have helped loving the game over the years because our father did. We always enjoyed taking our own kids to watch dad as head coach of the Charlottetown Jr A Abbies or as assistant coach of the UPEI Panthers.

Dad’s grandkids very much enjoyed watching Grampy coach from behind the bench. My son, Sully, enjoyed taking notes like Grampy, but did not appreciate dad taking a chair out on the ice during Panthers’ Hockey Camp where Sully adamantly stated, “tell Grampy to get rid of that chair.”
Waiting patiently for him after the games, the grandkids, Sully, Sydney, Cameron, Ashton, Breeana, and Nyssa could be found hanging over the boards as Grampy came off the ice…watching for Nan (Wanda) to give them the signal- whether or not, it was “a good game” to approach Grampy. If so, they could meet Grampy off the ice where they might go into the dressing room and get the remnants of an expensive hockey stick or game puck.

After watching dad coach so much, we knew “a good game” was one in which the players played with the heart, determination and drive that Hawk Larter and Jack Kane had seen in dad back in the day…the days in which one’s compensation for playing in varsity hockey was a new pair of skates. Dad never played or coached for the prestige or “business” of hockey but rather for the love of playing. We all admired dad for standing up for the old game of hockey in a new generation. Dad never lost sight of what his father, Pud, his grandfather, Hawk, and his uncle “Buck” first taught him about the game, which was to always play your best, being fully in the game with your heart and your head.

Dad’s years as a physical education, science and math teacher and vice-principal were not lost in his classroom on the ice. Whatever the educational arena, dad effortlessly modeled strength and tenacity as
he continuously and confidently volunteered his time to pass on his knowledge and expertise to other aspiring young coaches.

Dad spent more time consoling his kids and grandkids when he would no longer be behind the bench. We have truly treasured these moments. He knew how much we loved watching him coach and meeting with him afterwards for own rendition of Coaches’ Corner in the Whitlock living room with yet another hockey game or two on in the periphery. Not only has he given us his love of the game of hockey, but also of golf and being competitive and active in nature. You can see it in his sons when they golf with him (too bad Jamie inherited his contorted swing 🙂 or in his grandkids when they enjoy both watching and playing a variety of sports.

In closing, I would like to echo the words of coach, John Wooden, that in my opinion, truly exemplify my father’s contributions to the game of hockey over the years:

Be a gentleman at all times.
Never criticize, nag or razz a teammate.
Be a team player always.
Never be jealous, envious, or egotistical.
Earn the right to be proud and confident.
Never expect favours, alibi or make excuses.
Never lose faith or patience.
Acquire peace of mind by becoming the best that you are capable of becoming (Wooden, 2004).

Dad, you have more than earned the right to accept this induction into the PEI Sports Hall of Fame.

I, on behalf of my step- mother, Wanda, her brothers Doug and Wrendell, mother Audrey; my brothers Jamie and Jonathan; sisters Julie and Audra; dad’s sisters Barb and Darlene, and all of our extended families, invite all of you, to join us with our own coach in his corner tonight, as we warmly and proudly welcome my father, Gordie Whitlock, into the PEI Sports Hall of Fame!