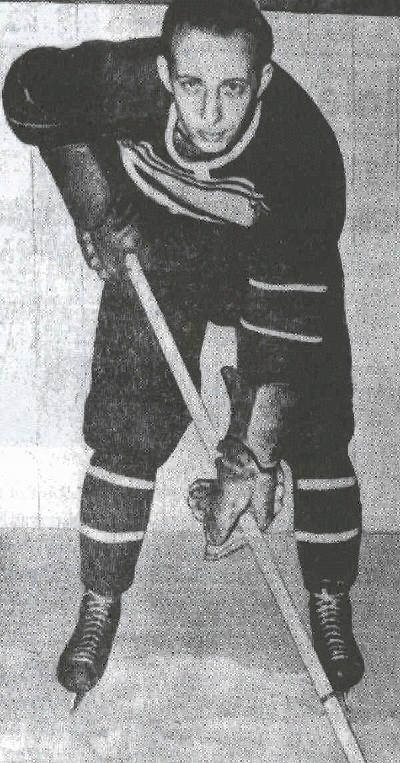 The Maritime Hockey Leagues will never again see another individual with such scoring ability as Roy Nelson “Buck” Whitlock of Charlottetown.  Born January 5, 1924, Buck Whitlock was a star performer in the Maritime “Big Four” League from 1946 to 1956, scoring a record 428 goals and making 528 assists for a total of 956 points. In so doing, he established five scoring records and twice broke the League’s mark for total points. In the 1956-57 season, “Buck” was in the Island League and in January of ’57, he garnered his 1000th scoring point in a game played at Summerside Civic Stadium. If this sounds amazing, consider the fact that statistics are unavailable from his days in Junior Hockey, his performance with New Glasgow in the Nova Scotia APC League and his time with Sandy’s Royals of Charlottetown in Island and Maritime Leagues.  It’s estimated that Roy Whitlock has scored more than 700 goals during his career.

Buck’s impressive 10 years in the Big Four League began with the Moncton Hawks in 1946-47, when that team had such notables as Wes “Bucko” Trainor [inducted 1983], Maurice “Mouise” Dowling [inducted 1981], Sammy MacManus, “Chick” Charleston, Hughie MacDonald, and “Fritz” Fraser, to name a few.  Buck finished 10th in the scoring with 25 goals and 35 assists for 60 points.  In 1947-48, he won his first Big Four Scoring Championship with 59 goals and 35 assists for 94 points.  He tailed off somewhat in 1948-49 with 18 goals and 30 assists for 48 points, which placed him 12th in the scoring parade.  This season appears to have merely been an opportunity for Buck to catch his breath, because in 1949-50, he moved to the St. John Beavers and won the scoring crown again. He amassed 64 goals and 49 assists for 113 points, making it his greatest scoring season up to that point.  He topped this personal best the following season, when he won the League Scoring Championship again, this time setting a league record with 57 goals and 67 assists for 126 points. In 1951-52, “Buck” was back home in Charlottetown with the Islanders and finished 7th on the strength of 32 goals and 59 assists for 91 points.  Although this was a drop of 53 points from his previous total, he redeemed himself the following season with the 1952-53 Islanders by breaking the Big Four League’s total points record for a second time and winning the Scoring Championship with 55 goals and 73 assists for 128 points.  He finished 3rd in scoring after the 1953-54 season before taking the Scoring title for a fifth and final time during the 1954-55 season. He ended his Big four days with the Fredericton Capitals in the season of 1955-56, during which he scored 31 goals and picked up 58 assists for 89 points and 7th position in the scoring parade.

On the night of March 9, 1953 at the Charlottetown Forum, “Buck” was recognized for his scoring prowess on the occasion of his 300th goal. His fans presented him with a new automobile at centre ice along with many other wonderful gifts. Buck had the opportunity to move onto what some might have considered bigger and better things, but he turned down a tryout with the Montreal Canadians and instead remained in the Maritimes.

In baseball, he was a most feared hitter, wielding a bat that resembled that of the mythical “Ozark Ike” of funny paper fame. It has been said that Roy Whitlock could have played in the majors had he been scouted at an earlier age.

Roy Whitlock’s performance on the ice lanes and ball diamonds are all the more amazing when one considers the fact that he was involved in a mishap during the Second World War while serving with the Royal Canadian Navy on board the HMCS Valleyfield.  The ship, carrying 164 people, was torpedoed.  Buck was one of only 38 survivors, and his 14-hour stay in the cold, icy waters while awaiting rescue resulted in permanent injuries to his legs, due to which he often required assistance in lacing up his skates.

“Mr. Maritime Hockey”, “Old Eagle Eye”, “Slick Buck” and “The Old Lamplighter” were just a few of fans’ nicknames for their hockey hero, who didn’t retire right away following his Big Four career.  He found “youngness” again in Oldtimers Hockey. In the 1975-76 season, he led the Charlottetown Oldtimers to the City Senior League Championship, the “B” Division Championship of the National Oldtimers Tournaments in Lethbridge, Alberta, and to the runner-up position in the International Oldtimers Hockey Tournaments in Amsterdam, Holland. Sadly, Whitlock passed away on September 15, 2003 at age 79. He lived long life and accomplished a great deal in the game of hockey.